A healthy band of precipitation associated with a weak cold-frontal zone presently sits over southern Idaho and will sag into Utah during the day today.

Although this is climatologically the coldest week of the year, this will be yet another warm storm.  Temperatures beneath the band along I-84 and I-86 are presently in the upper 30s and low 40s, including 41ºF in Burley with moderate rain and fog.  Before precipitation moves into the Salt Lake Valley, the NWS is calling for temps to peak out near 50ºF.

As precipitation spreads over the Salt Lake Valley later today, this morning's NAM predicts 700-mb temperatures for 0000 UTC (5 PM MST) this afternoon of about -4C.  That equates to a snow level of about 7000 feet.  This storm will start as rain in the valley.

As the cold air moves in, 700-mb temperatures fall to about -9C by 0600 UTC (11 PM MST) tonight, which will bring snow levels down to the valley floor at the end of the storm.

Valley accumulations should be light since the storm will be primarily rain.  For Alta, the NAM generates about .65" of liquid precipitation, which our snow-density algorithm suggests corresponds to about 7" of snow.  That's an average water content of about 9.1%, slightly above average, but because of falling temperatures, the snowfall should be right side up. 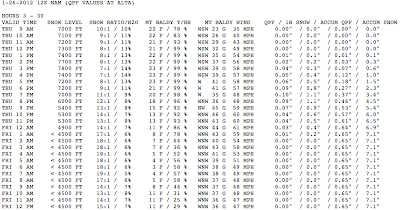 The GFS is a bit drier, but that's not uncommon given it's poorer representation of the topography.  Thus, something in the 6–10" range looks likely for the Cottonwoods through tonight.  This is a quick hitter, and the storm should be over by morning.
By Jim S Posted at 1/26/2012 10:16:00 AM