Old Man Winter is Back, and none too soon.  Over the past hour or two the vertically pointing radar that NC State has at Alta shows the highest, deepest radar reflectivities that I have seen all year (top panel below, time in UTC).  In other words, it is puking snow.

The Alta-Collins precip gauge shows .24" of SWE from 2–3 PM MST (21-22 UTC).  Based on the vertically pointing radar image above, that has likely continued through 4 PM.  Snowfall rates are likely around 2-3" per hour (possibly greater). 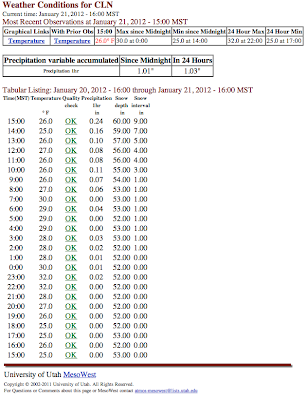 Snow crystal images from the snowflake camera at Alta show some nice graupel at 2:20 PM.  Graupel is produced by riming, the freezing of supercooled cloud droplets onto snowflakes.  It is favored in warmer storms.

And, things are just getting started.  The flow is veering to northwesterly and KMTX radar imagery shows plenty of action upstream, including near the UT–NV border where the pattern is more cellular, indicative of the sort of instability we want to keep post-frontal precipitation going over the mountains.  As temperatures fall, I suspect we'll see less graupel and more low-water content dendritic snow.

It's in the bag that this will be the biggest storm of the year in the Cottonwoods.  That's the good news.  The bad news is that the combination of a weak pre-existing snowpack, huge snowfall rates, and graupel during the initial portion of the storm must be pushing the avalanche hazard to the extreme.

A remarkable .29" of SWE fell at Alta Collins from 3-4 PM.  The snow interval during this period increased from 9-14".  There can be roundoff errors and some uncertainty in the snow interval changes, but snowfall rates of over 3" per hour seem likely.  Rock on!

Weird.  Just pulled up the Alta Collins data again and the 4 PM snow interval now says 10".  How bizarre.  I'll be checking with the MesoWest team on this one.  Presumably someone out there can confirm that it was indeed snowing like snot.
By Jim S Posted at 1/21/2012 04:26:00 PM