After weeks of waiting, snow is coming.  Surely you won't be picky?  I hope not, because the first storm looks to be loaded with Cascade Concrete.

The 1200 UTC GFS from this morning calls for precipitation to move into northern Utah during the day tomorrow (Wednesday).  The forecast valid 5 PM MST tomorrow shows a classic scenario for a heavy, high water content snowfall: Wet, windy, and warm.

Snow density in the Wasatch Mountains is most strongly related to the crest-level temperature and wind speed and the formula for Cascade Concrete in Utah is pretty simple: Warm Temperatures + High Winds = High Water Content Snow.

One of our student's here, Trevor Alcott, has developed an algorithm for predicting snow water content from the GFS and other computer models.  Based on the GFS, his algorithm calls for a snow water content at Alta of between 13 and 17% from noon tomorrow through 6 PM Thursday with the snow level reaching as high as 8600 feet at 3 PM Thursday. 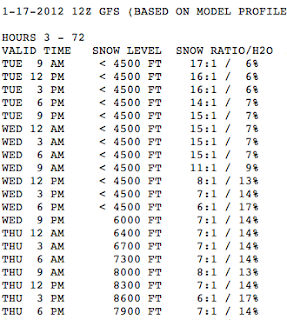