A Glimpse at the Future

Yesterday's post discussed some of the uncertainty in the forecast for today (Friday) and Saturday.  At issue for today was the position of the trough that was expected to develop over the Great Basin and extend downstream from the Sierra Nevada into northwest Utah.

Currently, that trough is located to the south of the Salt Lake Valley with northerly flow evident across much of northern Utah.  It is difficult to nail down the precise position during the early morning hours when shallow cold pools and drainage flows in the valley obscure the large-scale wind direction, but if I had to give my best guess I would probably put it somewhere in Utah county. 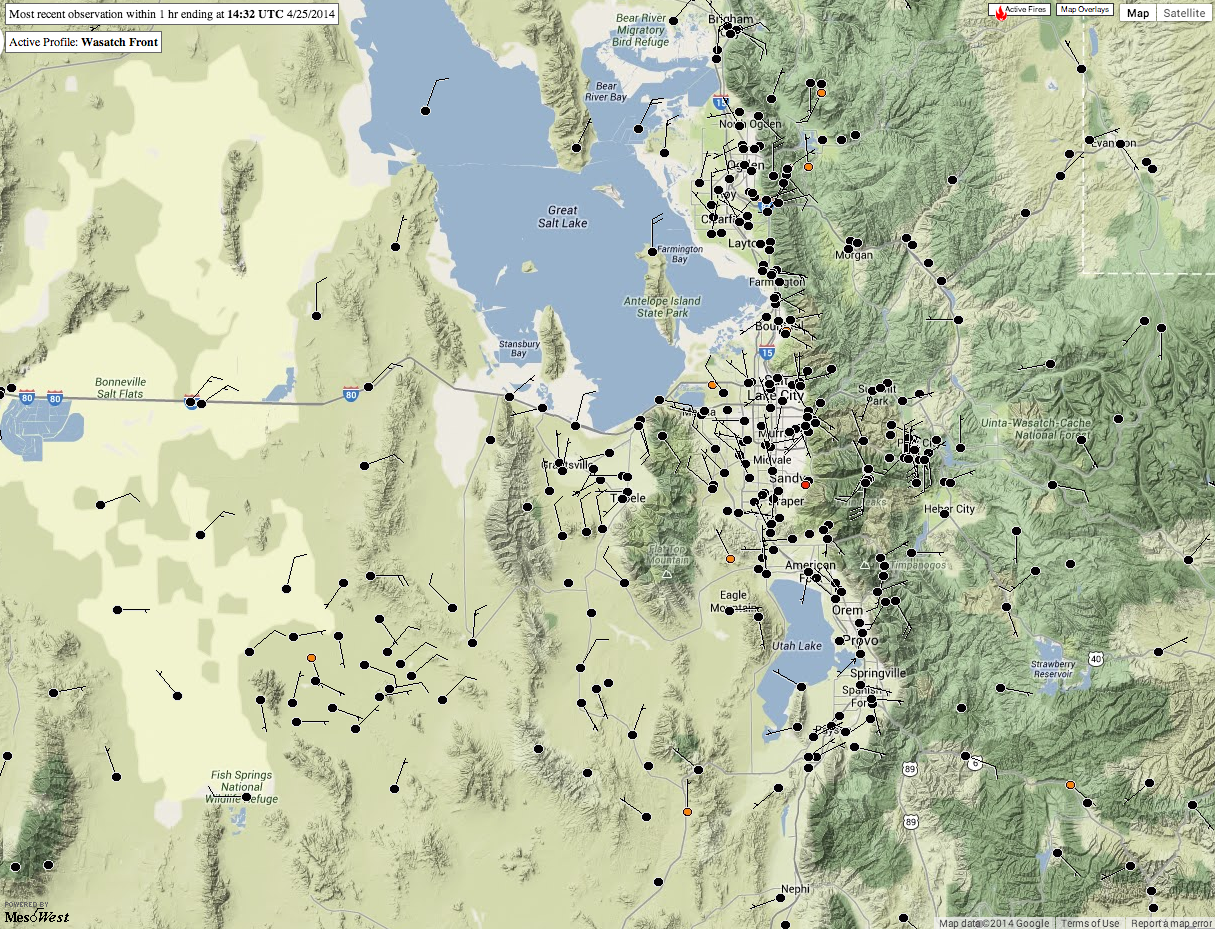 That's a bit south of where the models had it yesterday, but as I said, this was an event where one needed to recognize there was uncertainty in the forecast trough position.

Now I want to share with you some amazing images from a new forecast model called the High Resolution Rapid Refresh, known as the HRRR (pronounced "her").  Developed at the NOAA Earth Systems Research Laboratory (ESRL), the HRRR has 3-km grid spacing, radar data assimilation, and all sorts of other goodies that should allow it to become a game changer when it is finally implemented as an operational model at the National Centers for Environmental Prediction (NCEP).  Unfortunately, there have been numerous delays in the acquisition of a new computer at NCEP (see this post by Cliff Mass for why), but one can access the experimental version run at ESRL.

Those of you with a lot of bandwidth can access a monsterous loop of HRRR forecast surface winds for today by clicking here (it's worth a look).  Otherwise, just have a look at the two images below, which are wind forecasts for 2130 UTC (330 PM MDT) and 0100 UTC (700 PM MDT).  At 2130 UTC, note the dramatic transition between the strong southerly flow and the lighter flow to the north, with the boundary extending just into the southwest Salt Lake Valley.  Other tidbits here include downslope flow to the north of the Uintas (encircled by ligher flow) and numerous shear boundaries related to flow interaction with the topography. 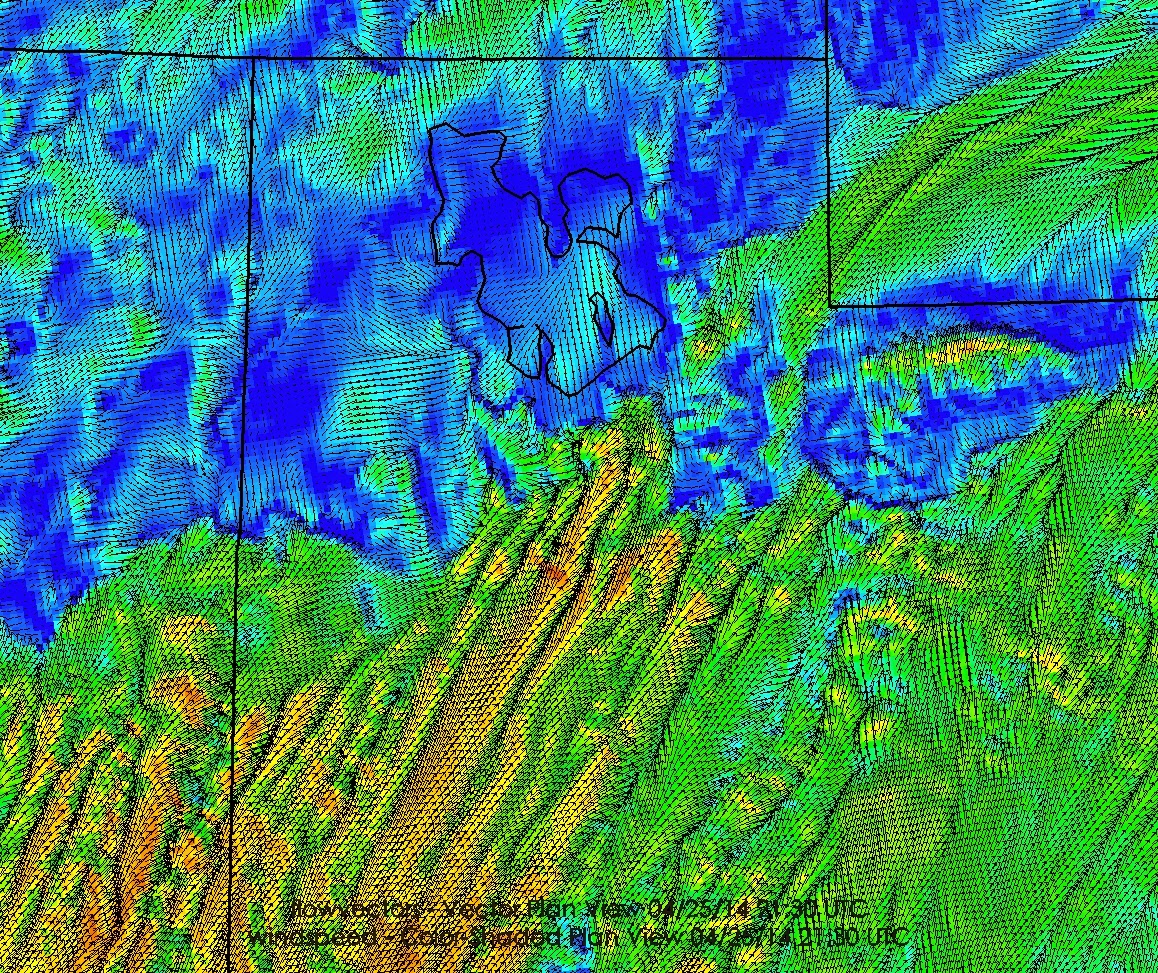 By 0100 UTC, the boundary has pushed just a shade further north (quite a bit further north over Dugway Proving Ground), but remains just south of the Great Salt Lake.  Meanwhile, a front is pushing into western Utah from Nevada. 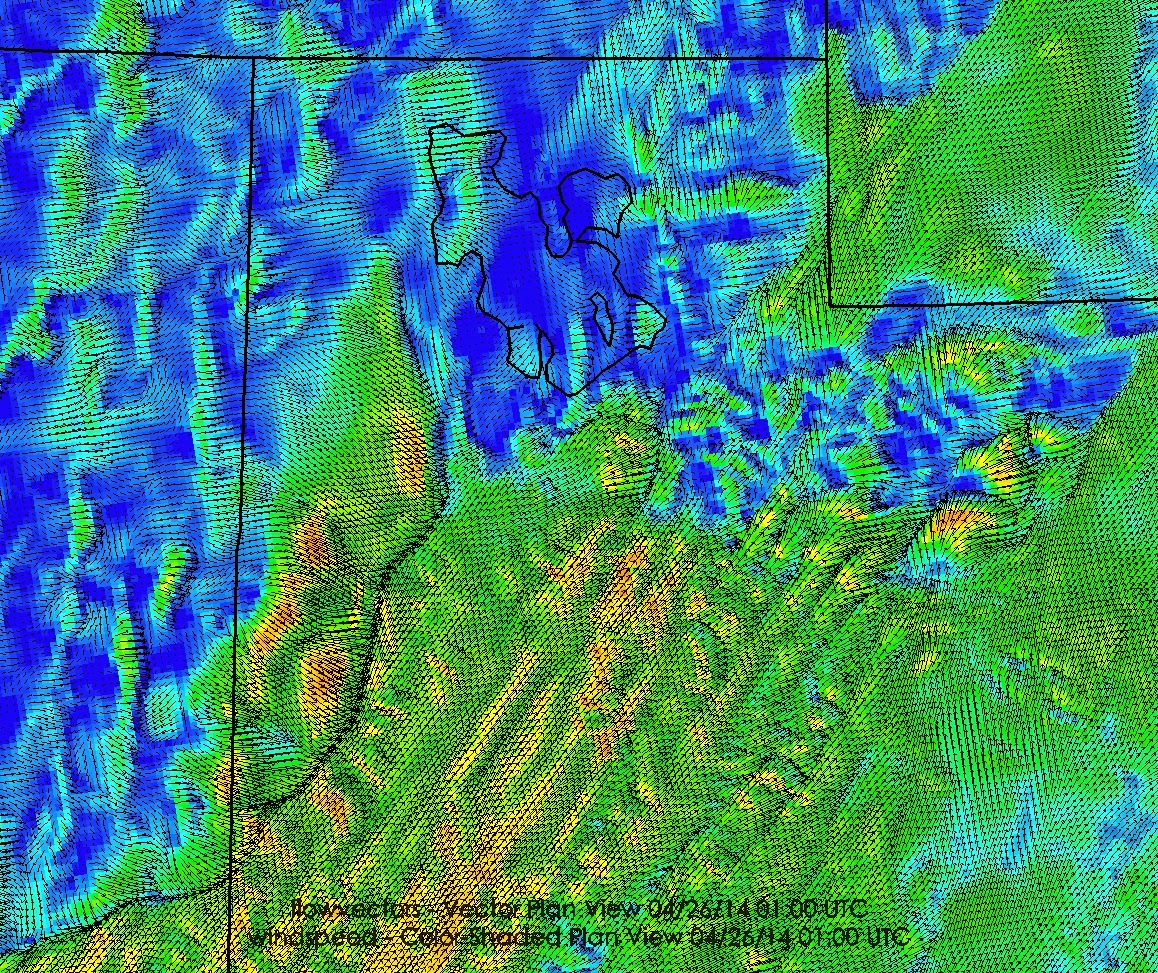 We will have to see how well the HRRR does on this event, but it has great potential to revolutionize short-range forecasting over Utah, as well as other parts of the continental U.S.  I'm hoping to integrate it into blog posts coming in the future - especially those related to snow!
By Jim S Posted at 4/25/2014 08:53:00 AM