A Cool Look at Snowfall in Little Cottonwood Canyon

It's a beautiful day in Salt Lake, but snow continues to dominate our thoughts.

In November of 2011, we had the opportunity to observe winter storms over northern Utah with a Center for Severe Weather Research (CSWR) "Doppler on Wheels" Radar.  For a meteorologist, it doesn't get any better than playing around with this beastie.


Today we learned that a paper based on our efforts was accepted by Weather and Forecasting, a leading journal in the atmospheric sciences.  Leah Campbell was the lead author and did a remarkable job describing the fine-scale precipitation structures that we observed in Little Cottonwood Canyon prior to, during, and immediately following the passage of a cold front.

For the event we positioned the DOW near Daybreak in the southwest Salt Lake Valley where it had an unobstructed view directly up Little Cottonwood Canyon.  We collected high resolution "horizontal" radar scans at various tilts to the horizon (known as PPIs), as well as vertical slices (known as RHIs) up Little Cottonwood Canyon and over the Cottonwood and Alpine Ridges to the north and south.  Several University of Utah students planned and executed the observing effort.

Prior to the frontal passage, we observed a pronounced "barrier-scale" mountain wave that resulted in stronger radar returns in the upper Cottonwoods and along the Wasatch Crest as one often anticipates during winter storms.  Most interesting in this case was that the strongest radar returns were displaced to the east of Lone and Twin Peaks.

A storm period like this produces greater accumulations at Snowbird and Alta than over the big lines farther down canyon like Lisa Falls, Coalpit Gulch, and the Y-couloir.  This is true not only on the canyon floor, but also at upper elevations.

The DOW is also a polarimetric radar (meaning it transmits and collects radar signals in both the horizontal and vertical planes), which allows us to infer the types of snow crystals in the storm.  Below you can see where and when ice crystals (small ice particles), aggregates (clusters of snowflakes), and low-density graupel are found. 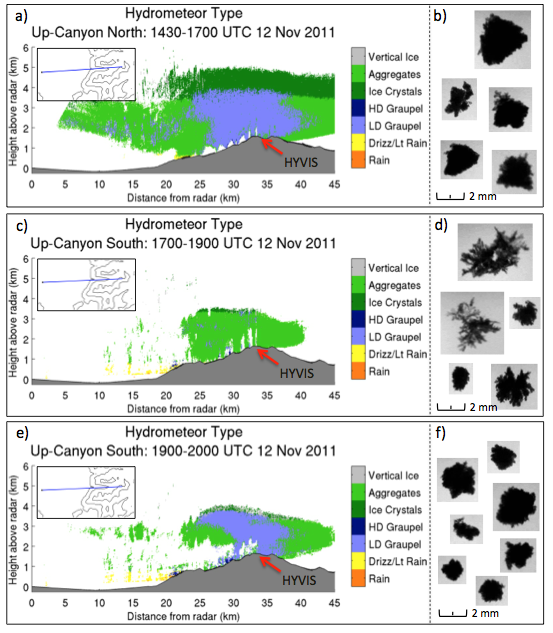 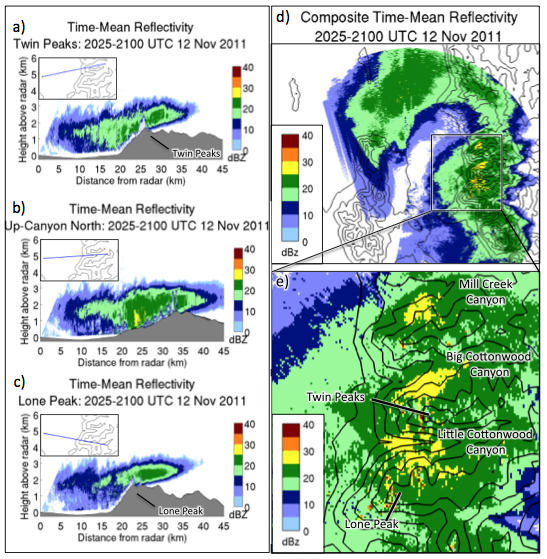 In a situation like this, accumulations are greater not at Alta and Snowbird, but in the big lines further down canyon like Coalpit Gulch and the Y-Couloir.  In Big Cottonwood, lines like Bonkers in Broads Fork would also do better, whereas on the south side of Twin Peaks, Lisa Falls would get less.

Instead, what this research illustrates is the tremendous potential to use small, well-positioned radars to better observe precipitation in the central Wasatch.  Yeah, I know you want to see this done simply for your powder-hunting pleasure, but there are some potentially important applications for public safety, especially the ability to monitor snowfall rates and ice crystal types in the starting zones of major avalanche paths that cross the Little Cottonwood Canyon highway.