Thermally driven flows are produced by spatial variations in heating and cooling associated with topographic and land-surface contrasts.  Examples include sea and land breezes, up- and down-valley flows, and up- and down-slope flows.

During the day, one typically expects up valley and up slope flows in areas of complex terrain, whereas at night and in the morning, one expects down valley and down slope flows.

Within narrow valleys, the up- and down-valley flows usually dominate the slope flows once the former are fully developed, such as is found in the late afternoon or early morning.

However, those generalizations apply to situations where the local forcings dominate and the larger-scale flows have little influence.  One can find many examples where the flows in canyons and along slopes deviate from what one would expect from local forcings.  One such example is lower City Creek Canyon.

If you frequently run or bike in the lower portion of City Creek Canyon in the afternoon, one typically finds what meteorologists call an antiwind.  An antiwind is a wind that blows opposite what one would expect from local thermal forcing.  In City Creek Canyon in the afternoon, one expects up-valley flow, which would be associated with SSW flow in the lower canyon and SW flow in the upper canyon above the elbow about 1 mile past the gatehouse (blue arrows below). 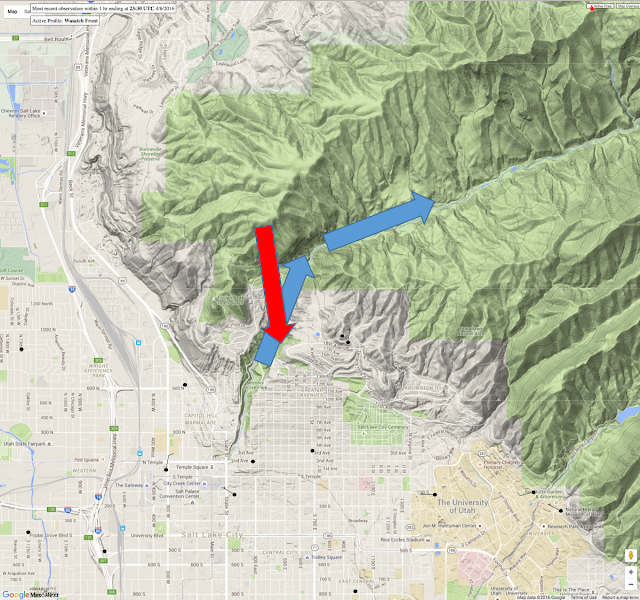 Instead, there is often a N or NW wind in the lower canyon (indicated by the red arrow above).  One can also frequently find a N or NW wind in the Avenues, which is downslope.  Indeed that was the case yesterday in the late afternoon as I entered City Creek Canyon on my bike from 11th Avenue.  Note also the north wind at the upper Avenues observing site in the figure above.

Such winds are of course completely demoralizing for a bicycling meteorologist.  My expectation is up-valley flow in the afternoon.  To have a down-valley headwind when I'd like an up-valley tailwind is simply unacceptable.

What is the cause of this antiwind?  On days with weaker large-scale flow, such as yesterday, it is likely that the larger-scale thermally driven circulation associated with the Great Salt Lake and Playa (i.e., the Lake Breeze) and the larger, broader Salt Lake Valley (up-valley breeze) overwhelms the up-valley flow in City Creek Canyon.  This flow pushes across the Ensign Peak ridgeline and then descends into the lower Canyon.  In some situations, there is a large-scale northwesterly flow, such as found behind a cold front, that further enhances or drives the antiwind.

Of course, there are days when there are strong up-valley winds in City Creek Canyon.  These may be days when these larger-scale northwesterly flows are weak or, better yet, there is a large-scale southerly wind pushing up the canyon.  You want a City Creek PR?  These are the days to go for it.

One thing I have noticed over the years is that the flow in upper City Creek Canyon often is weaker or even up valley.  I suspect this is related to several factors, including the fact that the ridge on the north and west side of the canyon is much higher in the upper canyon than the lower, which often blocks the larger-scale northwesterlies.  Aspects of the terrain geometry both in the canyon and around it also play a role.

In case you are wondering, yes there still is some snow on the road in the very upper Canyon within about a quarter mile of the top.  For early April, that's nothing.  April is the new May once again.
By Jim S Posted at 4/07/2016 08:51:00 AM