Although April 1st is commonly used as a key date for Utah snowpack, in the upper elevation north facing terrain in the Wasatch Range, the peak snowpack water equivalent isn't usually reached until late April.

It's late April now and the results are clear.

Oh, you probably had some good skiing.  There were a few good stretches and 2015/16 was certainly better than 2014/15, but if we're interested in snowpack at the end of the snow accumulation season, this year fell well short of par.

Let's take a look at the Snowbird SNOTEL.  Median (magenta line) and average (blue line) snowpack water equivalent both peak in late April at about 44 inches. 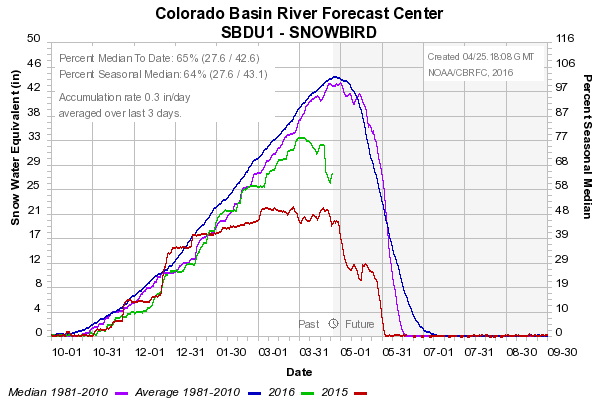 In contrast, this year (green line) we peaked around April Fools Day at about 34 inches and subsequently lost several inches of water equivalent due to an early ripening and melting of the snowpack.  April is the new May, at least this year.

What's that you say?  It snowed for Alta's closing day?  Perhaps, but that barely put a dent into the snowpack demise.  This week we may get a bit more snow, but we are about 15 inches below average, and that's a lot.  There won't be any making that up this year.

Be sure to take out your frustrations on all those people predicting a huge snow season because of the Super El Nino.