I had a Maalox moment around noon yesterday having issued a fairly confident forecast for 2-5" of upper-elevation snow only to see things explode in the southwesterly flow and produce some remarkable precipitation rates in upper Little Cottonwood (see prior post Big Water Amounts).

The Alta-Collins precipitation trace below tells the story.  For the 1-hour periods ending at 11 AM and 12 PM MST, water equivalents were 0.36 and 0.39 inches, respectively.  The 0.75 inches of water equivalent in that period was over half of the 1.4" that fell yesterday. 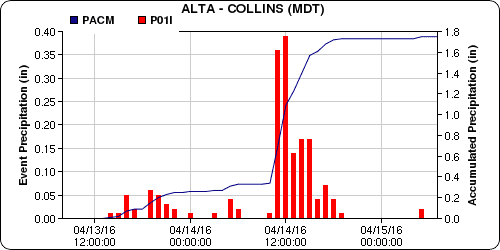 I don't have a careful analysis to back this up, but during the cool season (Oct-Mar), I water equivalent precipitation rates of 0.3" per hour are about as high as they get at Alta.  I usually associate such precipitation rates with warm atmospheric-river events.  To get two hours > 0.3"/hr is quite impressive, although there is greater potential for larger water equivalent rates in the warmer storms of April.

The warmth, however, was a blessing and a curse.  Temperatures at Alta-Collins (9600 ft) did not fall to 32ºF until noon yesterday.  Thus, a significant portion of the water equivalent fell as rain at low to mid elevations and what fell at upper elevations Wednesday and Thursday morning was quite dense.  The .75" of water equivalent at Alta-Collins from 10 AM to 12 PM yesterday was accompanied by only 4" on the interval board, for a water content of about 18%.

At Alta-Collins, yesterdays snowfall total was 8" by 6 PM, with another inch overnight, bringing the 24-hour tally to 9" and the storm-total since Wednesday to 10".  Given the warmth of the early part of the storm, a huge increase in snowfall can be found from about 7500 to 10000 feet.

Perhaps some good turns will be found at upper elevations since the latter portions of the storm were colder and the snow is stacked right side up.
By Jim S Posted at 4/15/2016 08:16:00 AM