We are now into April and the time has come to reflect on the 2015/16 snow season and my view is that it has been OK, but not all that great, but coming on the heels of 2014/15, it seemed pretty good.

First, let's talk about the ingredients of a great ski season.  First, there needs to be considerable snowfall during the early season (October and November) to build up a base for resort skiing during the holidays and, more importantly for backcountry skiing when the sun is at its lowest angle around the winter solstice.  Building up an early base also helps minimize the development of depth hoar and related avalanche problems in the backcountry snowpack.  Second, the snow needs to come in storms that are modest in size, which keeps the resorts and backcountry fresh while minimizing avalanche hazard.  Finally, such storms need to keep coming through March.

This year we had one out of three.  During the early season, snowfall was limited and through about 10 December, snowpack (green line below) and snowfall were well below average (blue line below is average, magenta line median).  Conditions were bony and we had a thin, weak snowpack that, although eventually strengthening, led to backcountry avalanche concerns. 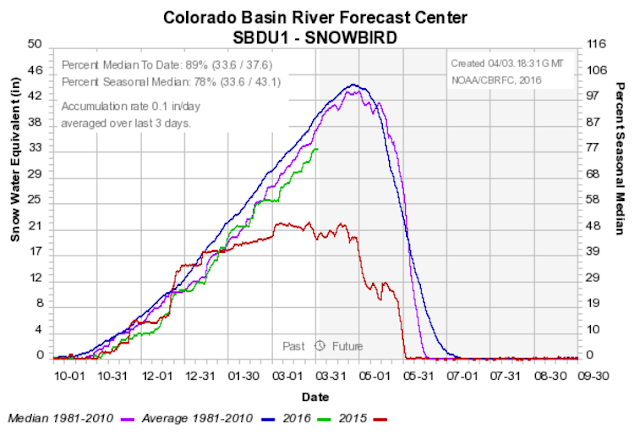 The pre-Christmas storm cycle saved our bacon and helped to turn the season around.  It also provided a low-elevation snowpack that greatly improved backcountry access, especially compared to 2014/15.

We then lucked out through about mid February when a succession of modest storms made for fairly good ski conditions.  An interesting aspect of this season compared to last season is that at the end of January, the water content of the upper-elevation north facing snowpack at Snowbird was virtually the same (see graph above).  Nevertheless, the skiing this year was certainly better as the snow came in a series of storms rather than a smaller number of large dumps (note the staircase-like structure of the snowpack trace from last year - red line above).

By early February, a big late February and March would have probably made this a pretty good season, but it didn't happen.  We went into drought from mid Feb to early March, with the sun doing its damage to the south side of the compass.  Things have subsequently picked up, and there has been some good skiing, but the spigot never fully opened.

As things stand today, Snowbird sits at 89% of median snowpack water equivalent, which puts us just below about half of the years since SNOTEL records began in 1990.  Alta ski area reports 382 inches to date, compared to a long-term average for Oct-Mar of about 412 inches.  Thus, in both instances, we sit just below par.

So, my view is that this has been an OK but not great snow year and ski season.  I suppose I could update that in early May if things really opened up later this month, but its hard to persuade me with snow that late in the year.  I prefer my dumps in November and December.

If you wish to argue that this has been a great ski season, let me show you a couple of examples of what a big snow year looks like.  Here's a SNOTEL plot with the 2010/11 and 2004/05 seasons overlaid.  How about nearly double snowfall and snowpack. 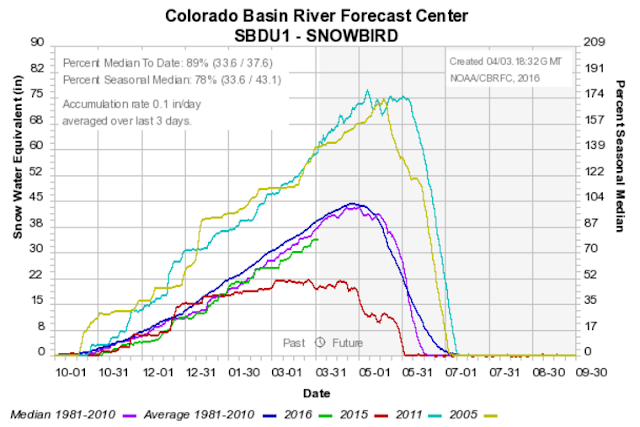