This is old news for some of you out there, but I thought I would mention it in case you missed it.  Global temperatures in February were mind-bogglingly high, coming in more than 2ºF above the 20th century average thanks to global warming combined with a strong El Nino.

If we look at 12-month periods ending in February, the past year was about 0.3ºF warmer than the previous year and a bit more than 0.5ºF warmer than any year prior to that.  Mother Nature sees your global warming hiatus and raising you 0.5ºF. 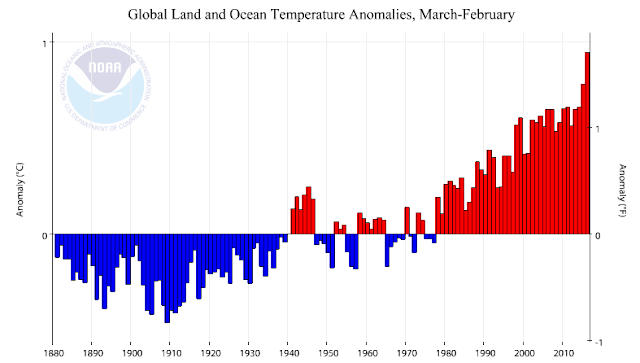 As we've discussed previously, we're going to see some relaxation from these high temperatures once this El Nino wanes.  That will not reflect an end to global warming.  The long-term trend is up.  Count on it.
By Jim S Posted at 3/23/2016 03:55:00 PM