A Look at the Changes Ahead

When suffering through a dry spell, it's easy to read too much into the extended range forecasts, but we will take a peak today, keeping in mind that we are still 3-4 days from seeing a possible storm moving in late Sunday.

In the short term through Saturday, the warm-weather corn harvest will continue, with just a few clouds at times (like this morning).  For you weekend warriors, Saturday will be characterized by warm southerly flow with 700-mb (10,000 ft) free atmosphere temperatures reaching nearly 2ºC by afternoon.

Given that we've had virtually no snow now for some time, treat Saturday like an April day and work the aspects.

Right now, Sunday looks to be a transition day with a possible frontal passage late in the day.  The 0600 UTC GFS put the front just downstream of the central Wasatch by 0000 UTC 7 March (5 PM MST Sunday).

It's a bit too soon to have confidence in the exact timing of the front, but it does look like we will finally see some precipitation during the day Sunday or Sunday night during and around the time of frontal passage.  Snow levels are likely to be high ahead of the front (8000-9000 feet), but drop quickly with the frontal passage.

The NAEFS precipitation plume shows a range of water equivalents for Alta between 1.0 and 2.7 " for the frontal passage period from Sunday morning through Monday morning (1200 UTC 7 March - 1200 UTC 8 March).  Based on what I'm seeing right now, I'd probably shift that downward a bit and go for a most likely range of about 0.5 to 1.75 inches of water. 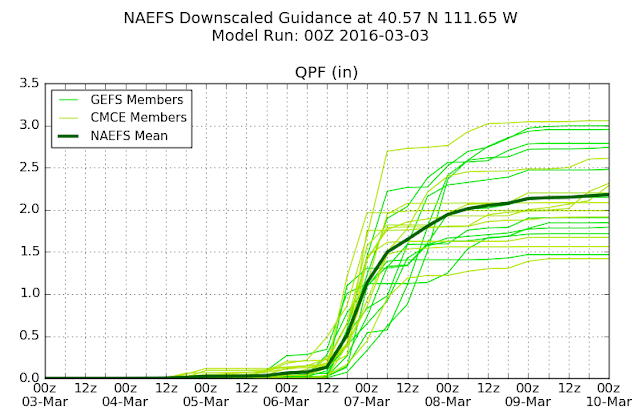 As noted earlier, it's easy to read too much into an extended forecast when you are suffering in a dry spell and I confess that I'm fairly uncomfortable discussing such details at these long lead times. With that CYA statement in mind, plan on checking the forecasts in the coming days.

As noted in the previous post, the pattern-shift hype machine has been in overdrive the past few days.  One of the biggest risks for the central Wasatch is the potential for us to transition to a big split, and I'm seeing evidence of that in the latest runs from the GFS and ECMWF.  For example, the GFS forecast valid 1200 UTC 8 March (5 AM MST Tuesday) puts the main trough well to our south, although we get a bit of frontal precipitation.

So, the good news is this is a pattern change to cooler weather.  We are going to get some precipitation Sunday and Sunday night, although it's a bit early to say how much, or to read into the details.  After that, much will depend on the storm track and the strength of the split.  Again, avoid the tendency to read too much into these extended range forecasts.  They are very alluring, especially when one is in a dry spell, but ultimately, one needs to be respectful of the chaotic nature of the atmosphere.

For those of you on the University of Utah campus, I will be giving the Global Change and Sustainability Center seminar this coming Tuesday.  It will be based in part on my book, Secrets of the Greatest Snow on Earth, but delve a bit more deeply into orographic and lake-effect precipitation. 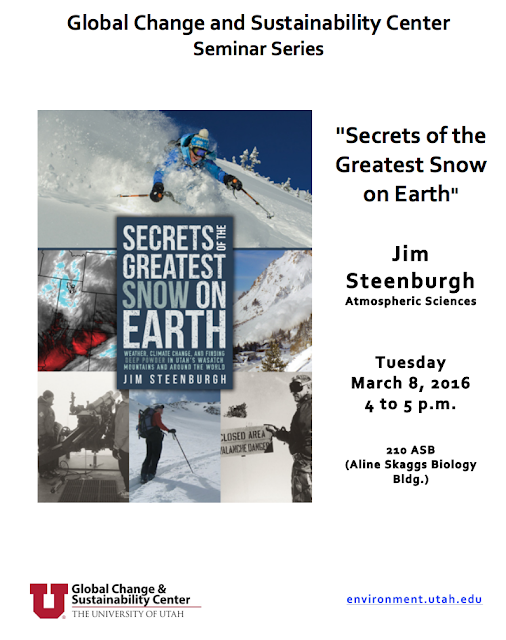