The Bergeron Process in Action

The beauty of mixed-phase clouds is that the relative humidity for ice is typically higher than it is for liquid water.  As a result, ice crystals grow faster than water droplets in mixed phase clouds.  This preferential growth of ice crystals is known as the Bergeron Process after Tor Bergeron, the Swedish meteorologist who proposed it as a mechanism for precipitation formation in clouds (it is sometimes called the Wegener-Bergeron-Findeisen process since Alfred Wegener and W. Findeisen also made contributions to the theory).

If you were at Alta today (Saturday), you may have seen the Bergeron process in action.  The shallow cumulus clouds that were over Alta were mixed-phase clouds.  Their relatively "hard" bottom and edges suggest they were comprised primarily of supercooled liquid water.  Beneath these clouds, however, one could see falling snow.  The cloud droplets in the cloud could not grow large enough to fall out, but the ice crystals could. 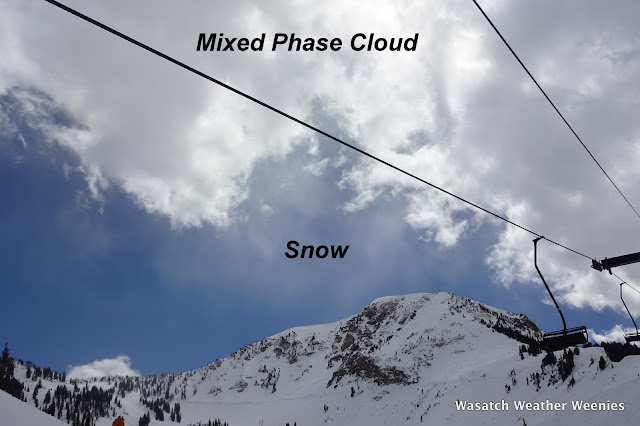