Not much change in the forecast from yesterday to today.  The models are still calling for a front to move through northern Utah on Sunday.  Most of the NAEFS ensemble members, for example,  are calling for a significant event, although I think the totals might be a bit overdone (e.g., Alta below). 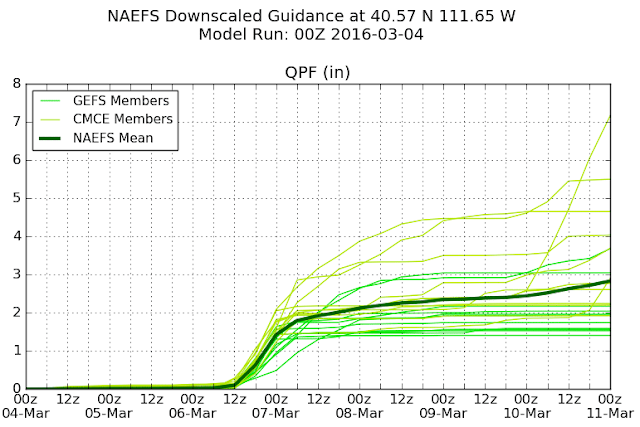 After that, most (but not all) of the NAEFS ensemble members are keeping us mainly dry with only a few snow showers here or there through the middle of next week.  The European has a similar solution.  After that I'm not speculating.

As most of you know, globally average surface temperatures have really jumped through the roof over the past several months due to the combination of long-term global warming with a strong El Nino event.  Much of the focus has been on the tropical Pacific and projections of impacts on the western U.S., but this has also been a remarkably warm winter in the Arctic.  This warmth, along with other factors, has contributed to the lowest average February sea-ice extent in the satellite record.

Further discussion this record minimum is available from the National Snow and Ice Data Center (NSIDC).
By Jim S Posted at 3/04/2016 08:51:00 AM