There's nothing like a spring trough passage in northern Utah.  As David Bowie said, ch-ch-ch-ch-changes.

Those current 700-mb temperatures, when combined with the high precipitation rates we are currently experiencing, are sufficient to bring snow levels down to the valley floor.  We are currently seeing heavy snow comprised of large aggregates (i.e., large snowflakes formed by the sticking of snowflakes together) at the University of Utah. 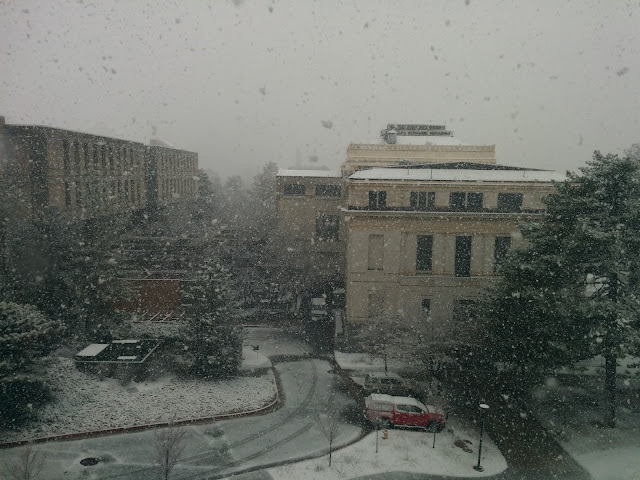 I took that photo about 10 minutes ago and since then the snow is piling up fast.  In addition, although the ground is warm, snowfall rates are high enough that snow is sticking on some untreated asphalt and concrete surfaces.

Radar shows not a heck of a lot upstream to our northwest (i.e,. over the northern Great Salt Lake), but the band currently over us is moving very slowly.

That makes this a very tricky forecast.  A slow moving band of high intensity can lay down a lot of snow in a hurry, especially on colder surfaces (accumulations today will depend strongly on where you measure).  For the University of Utah, I think accumulations of 2-4 inches on colder surfaces are likely today, with snowfall greatest over the next two hours.  Ultimately, accumulations will depend on how long the band holds on with lesser amounts if it fizzles and greater amounts if it hangs on.
By Jim S Posted at 3/22/2016 10:08:00 AM