We are now approaching the half-way point of the winter snow accumulations season in the western mountains and the snowpack situation is looking pretty dire in most areas except those near the Continental Divide of Colorado, Wyoming, and Montana.

Basin average snow water content in nearly all major river basins of Washington, Oregon, California, Nevada, southwest Idaho, Utah, Arizona, and New Mexico are below average and, in many instances, well below average.

In Utah, despite the recent storm cycle, the Wasatch are sitting solidly below average and, at least in the case of Snowbird, we are running behind last year's dismal showing.

As one moves eastward, the situation improves.  Many locations near the Continental Divide are near average, including the Tower Snotel in the Park Range north of Steamboat in Colorado where the snowpack snow-water equivalent is roughly double that at Snowbird (Coloradoans gloat here…). 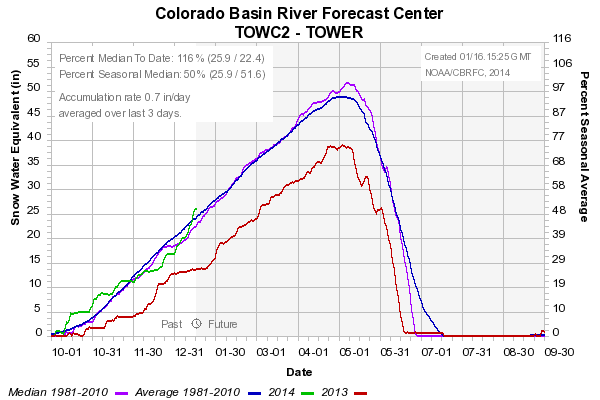 On the other hand, a dire situation exists presently in the Sierra Nevada.  The KT-22 WebCam from Squaw Valley pretty much tells the tale.

With a huge ridge over the western U.S. the dry spell is expected to continue for at least the next week.  Seasonal prediction is of course more uncertain than weather prediction, and Mother Nature can flick the switch and bring a lot of snow quickly, but such large snowpack deficits are going to be difficult to overcome.  This is reflected in the U.S. Seasonal Drought Outlook from the Climate Prediction Center which expects drought to persist or intensify (brown shading) or to develop (yellow shading) in the areas of the west and southwest currently with low mountain snowpacks.