The Curious Case of the Partial Mix Out

Yesterday was a fascinating day with regards to the evolution of pollution in the Salt Lake Valley.  You might recall that on Tuesday we scoured out some of the pollution at bench level, but a shallow layer of cold air and hideous smog remained in the valley.  Some nice photos of this shallow layer of smog were sent to me by a couple of readers.

Yesterday, however, the situation changed dramatically as pollution began to vent and mix to much higher altitudes as could be seen from upper Little Cottonwood Canyon.

By late afternoon, one could still see a veil of smog at bench and upper levels draped over the gunk that was pooled in the lower elevations. 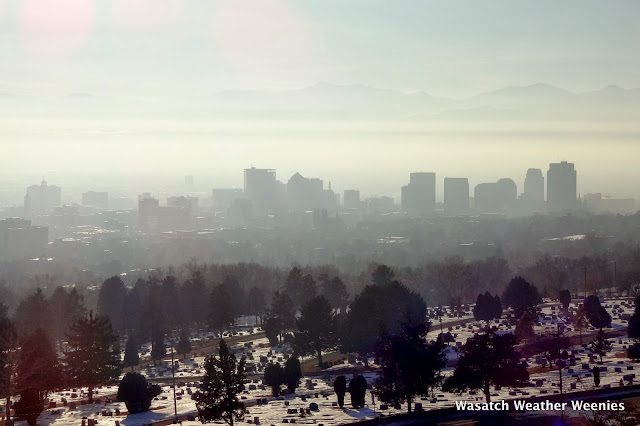 Why we were able to vent and mix more effectively yesterday afternoon is a bit of a mystery, but the inversion did weaken as cooler air moved in aloft on Tuesday and then temperatures yesterday did climb to their highest levels in many days.

And the good news accompanying these changes is that PM2.5 concentrates have dropped over the Salt Lake Valley and other areas of northern Utah.

Anticipating these partial mixouts is perhaps the most challenging aspect of the meteorology of inversion events.  I don't think it was well anticipated by anyone, including yours truly.  As much as that bothers me, I'm not going to complain as this is welcome relief.  A series of systems on Friday and Saturday will hopefully bust up the rest of the gunk.