Evolution of an Eastern Snowpack

We've had some downtime here in upstate NY and are using the time to analyze some of the data we've collected in the last several weeks over the Tug Hill Plateau.  I wanted to share a very interesting graph that shows the dramatic impact that the Tug Hill Plateau has on winter storms and the love–hate relationship that Mother Nature has with snowpacks in the eastern U.S. 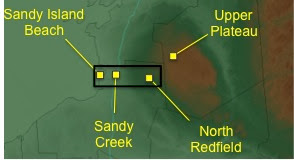 These sites may be only 800 feet difference in elevation, but the contrast in storm intensity and snowpack is enormous and impressive even for a hardened mountain weather scientist and powder snob like myself.