To put it scientifically, it absolutely puked snow in upper Little Cottonwood Canyon during frontal passage.  Check out these observations from the Alta-Collins (CLN) MesoWest site. 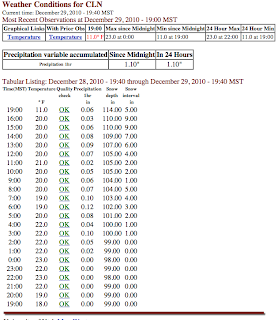 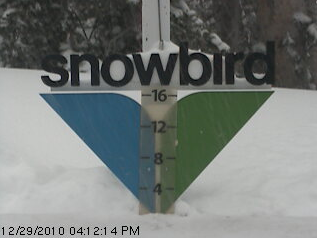 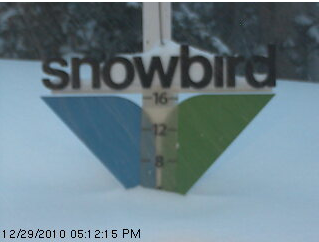 This incredible hourly snowfall occurred as the cold front moved across the Cottonwoods.  Check out the radar loop.  You can see the band of enhanced radar reflectivity associated with the cold front move into the Salt Lake Valley.  Although it becomes more difficult to follow as it approaches the Wasatch, you can clearly see a band of higher reflectivity continuing toward the southeast, especially near the Wasatch Crest.  Thus, there must have been a heck of a pulse of heavy snow not only in the Cottonwoods, but also moving down the Wasatch to at least Mount Timpanogos.  The band appears to move across the Cottonwoods between about 2300 and 0000 UTC, roughly the period when it was puking snow.

All of this happened just after the close of skiing for the day on a holiday weekend.  Must have been a nightmare getting out of the canyon today.
By Jim S Posted at 12/29/2010 08:04:00 PM