The next ten days have tremendous potential to transform the early season skiing potential in the central Wasatch Mountains.

We've already been blessed with a good October. The Snowbird SNOTEL sits at 3.9" of snowpack water equivalent, which is 390% of median. The warmth of the past few days has caused some snow losses on south and west facing slopes, but has also probably limited depth-hoar formation, which may help us stave off a persistent weak layer (note that I was not in the field yesterday or today so this is not an observation and it does not mean that surface facets, near surface facets, or other weak layers could prove problematic when the snow begins tomorrow).

A best-case scenario now is for the snowpack to deepen, opening more terrain for touring and giving us some additional insurance against depth-hoar formation.

Tomorrow is looking good.  A cold front is expected to stall over northern Utah, giving the central Wasatch a prolonged period of snow.  The situation at 1500 UTC 2 November (9 AM Wednesday) shows the 700-mb temperature contrast associated with the cold front parked right over the Central Wasatch.  Additionally, the flow in this area is confluent, with 700-mb (about 10,000 ft) inflow between south-southwesterly flow over southeast Utah and west-southwesterly flow over northwest Utah aligned right along the front and temperature contours (see lower left). 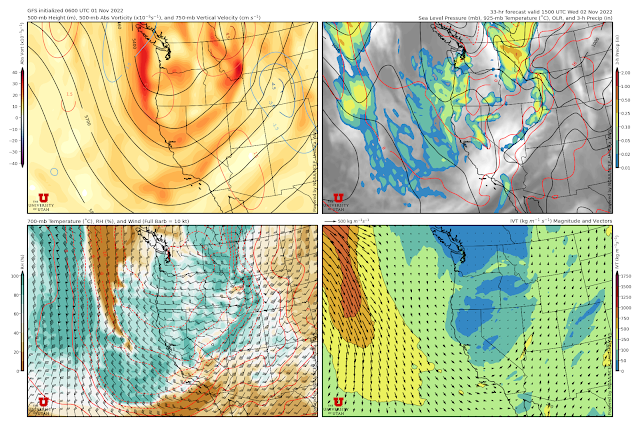 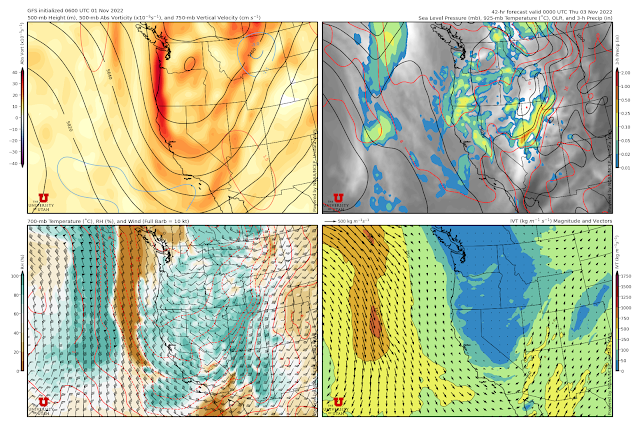 By 0600 UTC 3 Nov, the GFS has laid down just over 1" of water equivalent in the upper elevations of the central Wasatch. 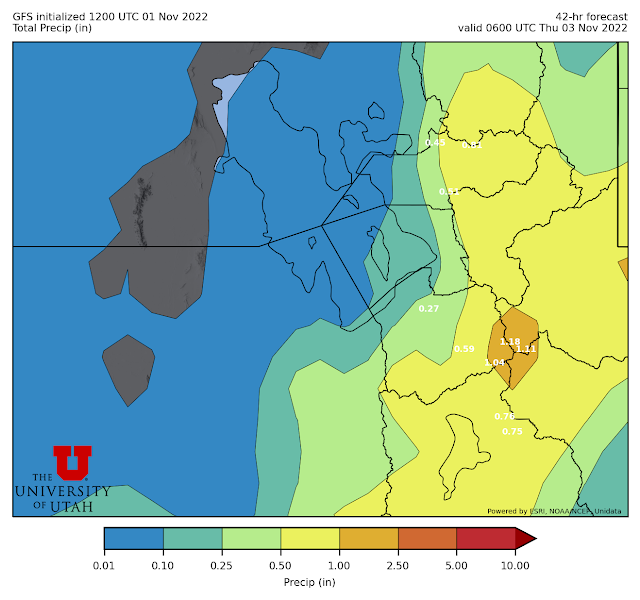 The GFS terrain is smooth, so it does not capture some of the fine-scale characteristics of precipitation in the central Wasatch.  I have noticed that it often produces more snow at the Park City resorts than Alta (as is the case above), even though that is typically not the case.  The Euro is also near or just over an inch through 0600 UTC 3 Nov near or just east of the Wasatch Crest.
On the other hand, the HRRR has better terrain representation and puts out 1.33" at Ala Collins, 1.1" for Canyons-Daybreak, and 0.76" for Deer Valley-Ontario. 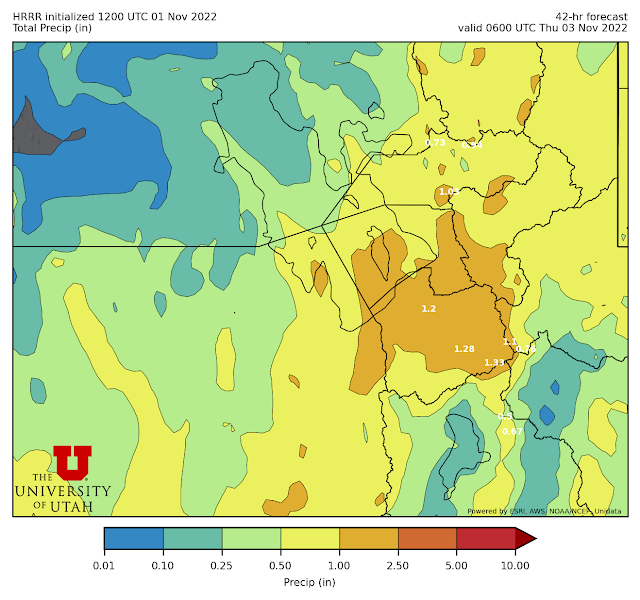 There is some potential for orographic or lake-effect snow continuing Wednesday night and Thursday.  Right now, the flow directions and depth of the instability being advertised by the models are such that I don't expect this to be a major accumulation period for the central Wasatch, but that could change if the flow direction shifts.
The latest 12Z GFS-Derived Little Cottonwood forecast just came in as I type this and it is consistent with the forecast above.  About an inch of mostly frontal precipitation (water equivalent) through  midnight Thursday and then a bit more through early Thursday morning and Thursday during the day. 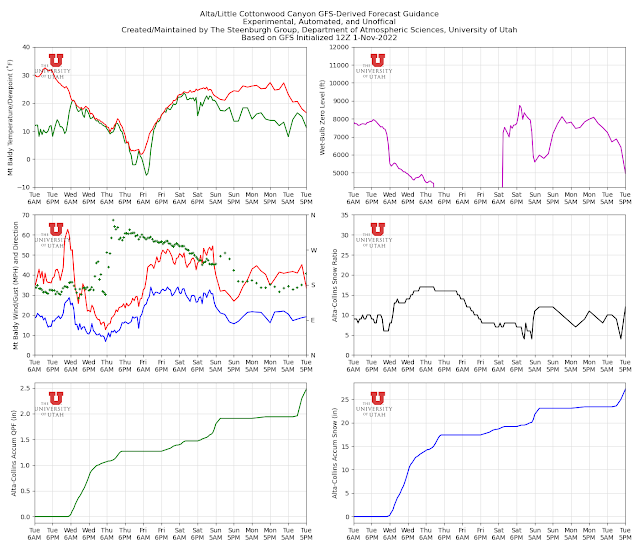 Applying our snow-to-liquid ratio algorithms to that gives about 13" of snow through midnight Thursday and 17" by Thursday night.
Based on these forecasts, I expect 10-18" of snow at Alta Collins by midnight Thursday and then perhaps another 3-6" after that through the Thursday afternoon.
The forecast beyond that is also optimistic.  Through 5 PM next Tuesday, another 1.25 inches of water in the GFS.  Other models vary, but overall the pattern is one in which I expect to see more added to the snowpack.
Remember that the resorts are de facto backcountry right now.  Avalanche conditions will be changing dramatically tomorrow.  Let's be careful out there.
By Jim S Posted at 11/01/2022 11:12:00 AM