How about Something Different

Mother Nature has been generous so far this year with 50" of snow so far at Alta and the Snowbird SNOTEL station up to a very solid 5" of snowpack water equivalent.  Skiing conditions yesterday were very good.  A few people elected to get out. 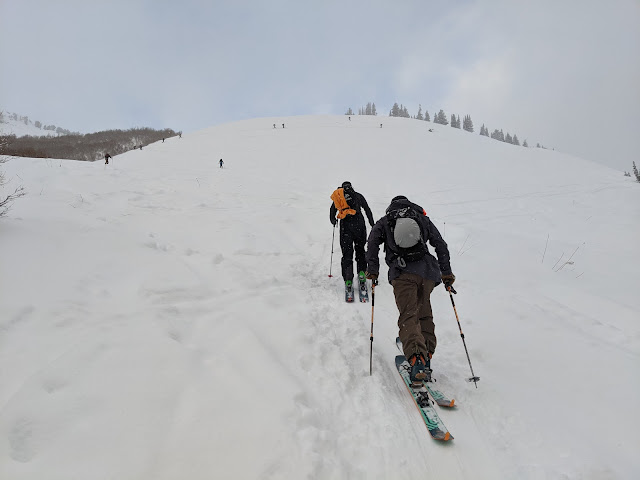 Most of the snow we've received so far this season has been produced by slow moving or stalled cold fronts or cold, postfrontal flows.  That will change with our next system. 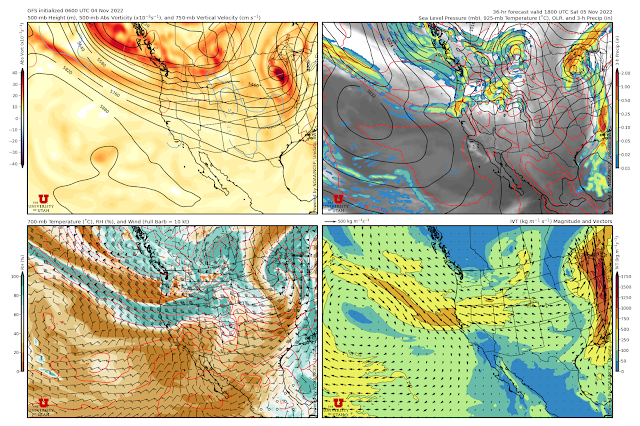 The time height section through 6Z 6 November (midnight Sunday) shows the gradual descent of an elevated warm front today through tonight.  By 1200 UTC 5 November (6 AM MDT Saturday), relative humidities except near the surface are generally at or above 90% through a deep layer.  During the day tomorrow, the valley flow will be southerly to southeasterly, but westerly aloft.  Eventually low-level winds shift to northwesterly after 0000 UTC 6 Nov (6 PM MDT Saturday) as the GFS sags the trough slowly southward through northern Utah. 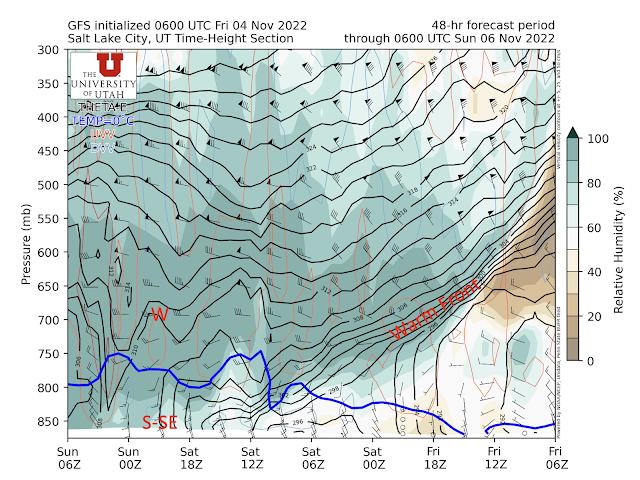 Basically, this is a recipe for a warm, windy storm in the mountains and virga with occasional rain showers in the Salt Lake Valley Saturday and Saturday night, with precipitation rates likely greatest during the approach and passage of the trough.

There are, however, model disagreements on the timing and productivity of the storm.  The 12Z HRRR is going off and shows strong enhancement of water-equivalent precipitation over the Wasatch through 1200 UTC 6 November (5 AM MST Sunday - note local time change)  with 0.69" at KSLC, 0.73" at Cottonwood Heights, and 2.71" at Alta-Collins.  Some big numbers are also evident in the northern and southern Wasatch.  Most of this precipitation falls Saturday and Saturday night. 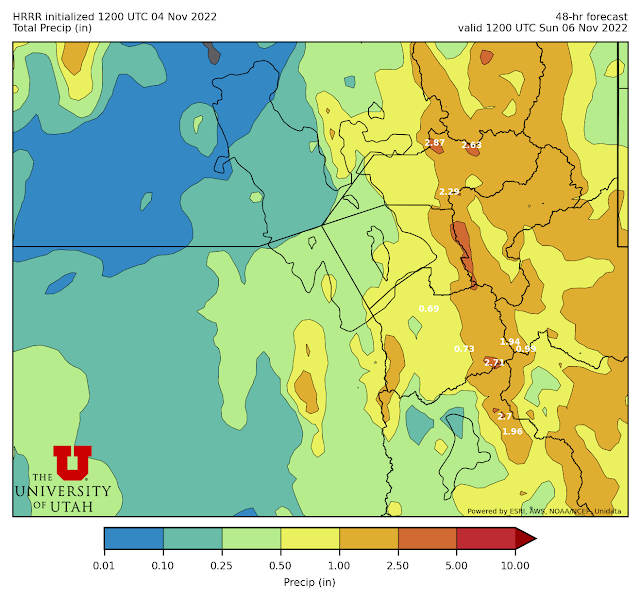 The global models are, however, a little less enthused for the central Wasatch.  The GFS generates 0.94" and ECMWF about 0.93" for Alta-Collins for that same period.  The ECMWF is also slower with things picking up later on Saturday.
The models do agree this will be a warm storm.  Below are some numbers from our GFS-derived forecast for Little Cottonwood Canyon.  The wet-bulb zero level on Saturday rises from as low as 6100 feet at 11 AM to 7900 ft at 7 PM before dropping Saturday night. 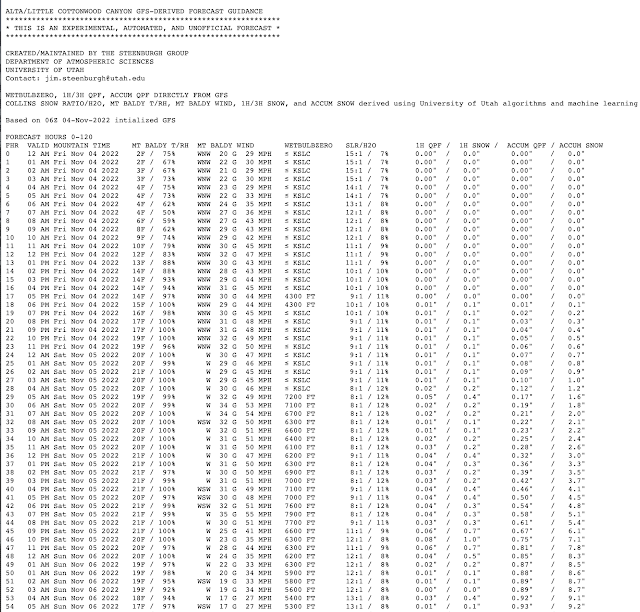 The snow level is typically a bit below the wet bulb zero level, but this is a recipe for high-density, possibly upside-down snow on Saturday and Saturday night before things cool off Saturday night after the trough passage.  Our algorithms suggest snow-to-liquid ratios on Saturday and Saturday evening of 8 or 9 to 1 (water contents of 11 to 12%).  I would not be surprised if the density was higher than that.
Bottom line is that we are looking at a base-building snow event at upper elevations and a bit of a mess near and below 7000 feet with precipitation type varying.  For Alta-Collins, I would probably not go all in on the HRRR forecast.  I can't rule it out, but something like 1-1.5"of water and 8-16" of snow through Sunday morning is probably more likely (the NWS is going for 0.9 to 1.25" and 10–16").
By Jim S Posted at 11/04/2022 08:57:00 AM