I've felt quite conflicted the past week as we have a robust snowpack for late November, but ski conditions at the resorts have been scratchy, whereas a multitude of crusts and other less-than-desirable snow surface have predominated in the backcountry.  Touring on Saturday, I had 3 good turns and 97 bad ones (that's an estimate).  Far be it from me to complain given the healthy snowpack, but we need snow.

The good news is we are going to get it with an upper-level trough and associated frontal system moving through the area today and tonight.  The 0600 UTC initialized GFS forecast valid 2100 UTC 28 Nov (2 PM MST Monday) shows the upper-level trough axis over Nevada, the 700-mb trough over northern Utah, and a mixture of orographic (i.e., mountain induced) and frontal precipitation over northern Utah and extending upstream across Nevada, Idaho, and Oregon. 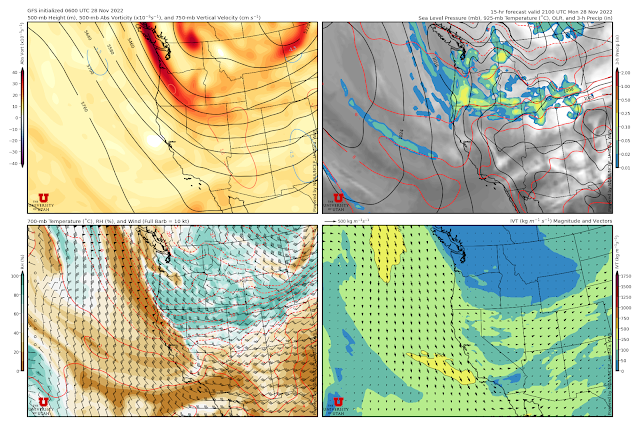 The corresponding GFS time height section shows moisture aloft this morning with dry (lower relative humidity) air at low levels over the valley.  Low-level trough passage occurs just before 2100 UTC (2 PM) and is accompanied by a shift of low-level winds to northwesterly and deeper moisture.  Even in the valley, snow is likely this afternoon with travel impacts. 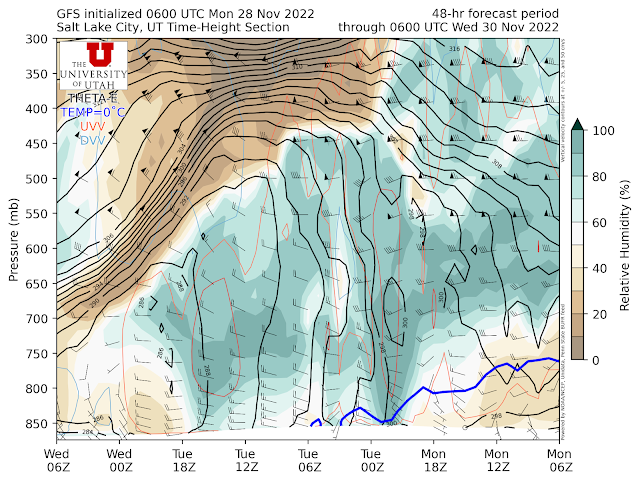 After that, we are in deep, moist, unstable flow.  This is a good situation for post-frontal snowshowers in the mountains.  Additionally, the 1200 UTC initialized HRRR is generating a lake-effect band tomorrow morning. 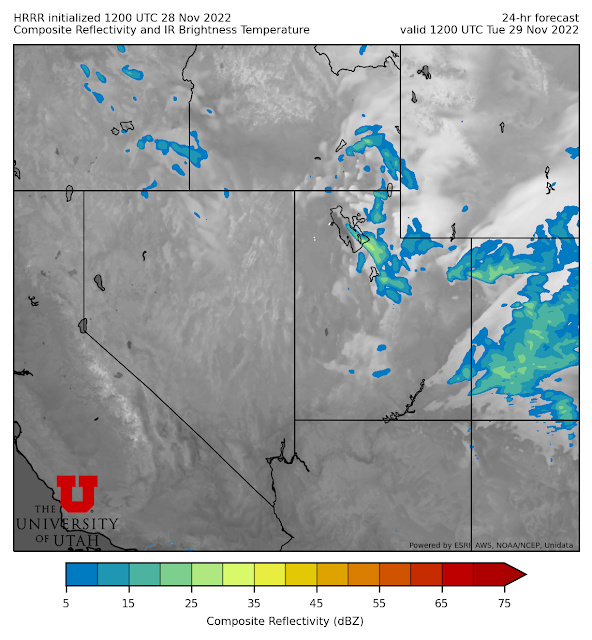 However, our Great Salt Lake Forecast Guidance, which is derived from the GFS, has low lake-effect probabilities overnight (< 20%) increasing in the morning, with Bountiful favored. 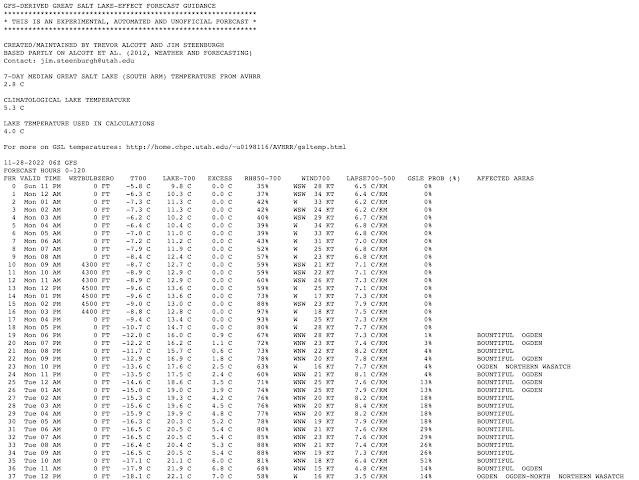 A look at the GFS time-height section above illustrates why the GFS is less excited as it forecasts the low level flow to be mainly from the west to the west-northwest.
In contrast, the HRRR time height has more NW flow (note that this is the 1200 UTC initialized HRRR, so there is a 6-hour time shift in the times plotted in the time-height below compared to the GFS above) and a more favorable pattern for lake effect. 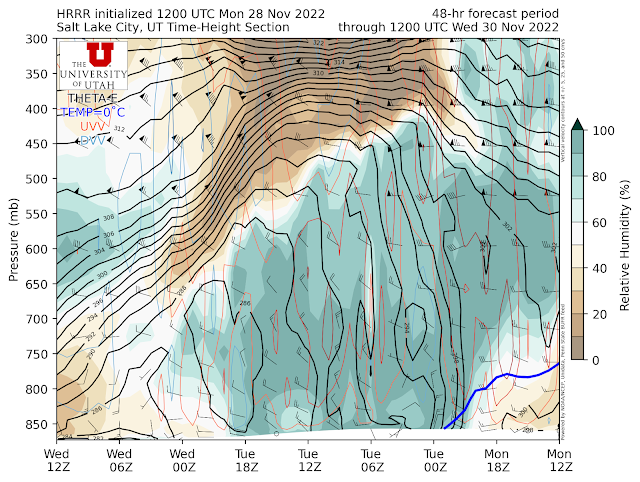 There's no reason to rate one model above the other.  One of the reasons why lake-effect is fickle, and why meteorologists call it the Dreaded Lake Effect, is that there is sensitivity to the details of the large-scale flow.  Tonight is a situation where lake-effect is possible, but we really can't say much yet about intensity or location.
For Alta/Little Cottonwood, our GFS-derived product shows light precipitation through about noon when things pick up with the approach of the trough.  Through 7 PM this evening, the GFS generates 0.58" of water at Alta Collins, which translates to about 8" of snow. 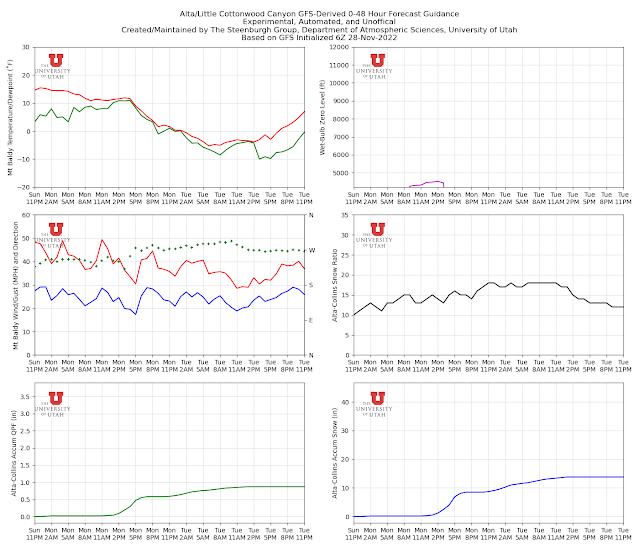 After that, the GFS adds another 0.29" of water through Tuesday afternoon and a bit over 5" of low-density snow, bringing the storm total to 0.87"/13.8".  That would be a Goldilocks storm if ever there was one.
The HRRR is pretty close to the GFS through 7 PM (0.51" of water) but is much snowier overnight with more post-frontal and lake-effect precipitation, bringing the storm total by 2000 UTC (1 PM MST) Tuesday afternoon to 1.61" at Alta-Collins. 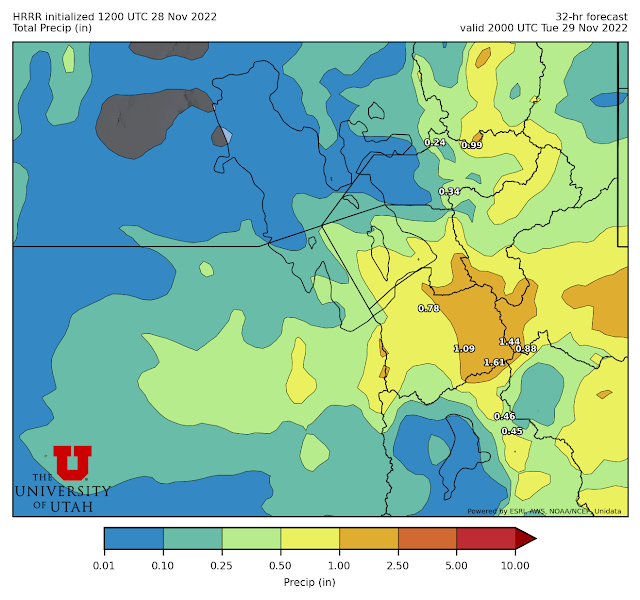 We haven't plugged our snow-to-liquid ratio algorithms into the HRRR output yet, but I suspect that would be a storm total of a bit over 24" of snow if it verifies.
I'll go with 6-12" at Alta-Collins through 7 PM tonight with the frontal passage.  After that, a lot will depend on the post-frontal crap shoot, but a storm total of 12-18" seems likely through Tuesday afternoon, with greater amounts if the post-frontal instability showers or lake-effect can get going with crosshairs aimed at the central Wasatch.
By Jim S Posted at 11/28/2022 08:19:00 AM