Sure Alta, Snowbird, and Snowbasin are opening today, but it is the Great Lakes snowbelts that are getting the goods today.  It's always a "good" sign when Jim Cantore comes to town and he measured 32" south of Buffalo in Hamburg, NY this morning.

32” and counting in Hamburg, NY pic.twitter.com/WEcO8teIWs

Satellite and radar imagery at 1445 UTC (945 AM EST) showed an intense long-lake-axis-parallel (LLAP) snowband extending along nearly the entire length of Lake Erie and across the southern portion of the Buffalo Metro Area.  Another LLAP snowband extended downstream of Lake Ontario into the western Adirondacks. 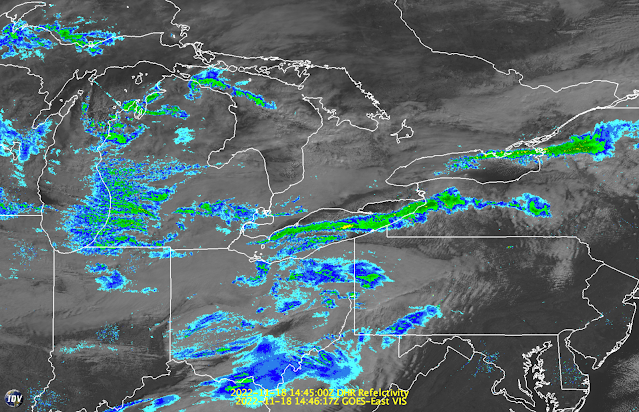 LLAP snowbands can develop during flow along the long axis of elongated lakes like Lakes Erie and Ontario.  They tend to produce intense snowfall rates, sometimes exceeding 4 inches an hour (we measured up to 5.5" in an hour once on the Tug Hill Plateau east of Lake Ontario and I have seen unofficial reports of 5" an hour this morning from Hamburg), with no snow to the north and south of the band.  At the time of the radar image above, for example, there would have been no snow falling in the northern Buffalo Metro Area and Niagara Falls just to the north of the LLAP snowband.

Note that the character of the lake-effect snow east of Lake Michigan is completely different.  Instead of a LLAP snowband, there is broad coverage of multiple small-scale snowbands.  This is common during flow across the long axis of elongated lakes.  Lake Michigan can produce LLAP snowbands, but typically during northerly flow when the flow is along the long-lake axis.  When the flow is from the west and across the long-lake axis, as is the case above, it typically produces broad coverage lake effect.  Broad coverage lake effect covers a larger area, but typically with lower peak snowfall rates than LLAP snowbands.

In this case, Lake Michigan is upstream of Lake Erie and it is probably contributing to the intensity of the Lake Erie LLAP band by moistening and destabilizing the flow before it moves over Lake Erie.  The initiation of the Lake Erie snowband very close to the upstream shore is consistent with the upstream airmass being primed and ready to go as it moves over the lake.  This is sometimes referred to as an aggregate lake effect, or a lake-to-lake connection.  The intensity of Lake Erie and Lake Ontario snowbands is not always due entirely to local lake influences, but also to upstream lake influences.

Incredibly, this event has a ways to go.  We will see some big snowfall totals, especially if the band can lock in instead of vacillating around like a loose firehose.