Forecasts from the NAM for the 700-mb level (crest level or about 10,000 ft above sea level) for 1200 UTC (0600 MDT) this morning show a deep trough with cooler air over the Pacific coast.  Ahead of this trough, the flow is southwesterly and temperatures warmer.  Over Nevada, the focus of this talk, the 700-mb temperatures are around 6ºC in southern and central Nevada and 0˚C in extreme northwest Nevada.  There is a slight wind shift across Nevada with the flow weakly confluent, or merging. 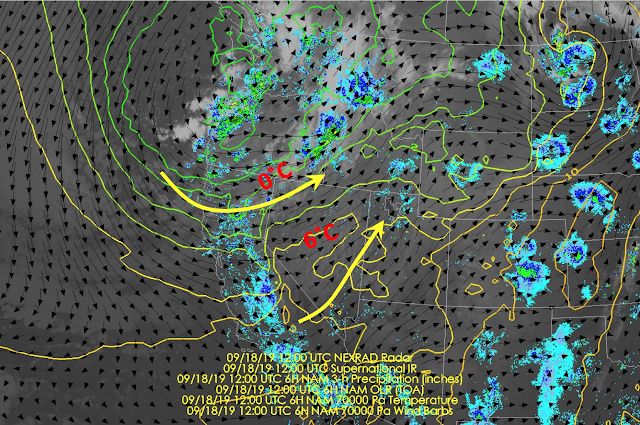 By 1800 UTC (1200 MDT), we see the first signs of frontal strengthening.  Note how the isotherms, or lines of constant temperature, have come closer together over northwest Nevada, indicating a strengthening gradient in temperature.  The wind shift across this feature has also strengthened. 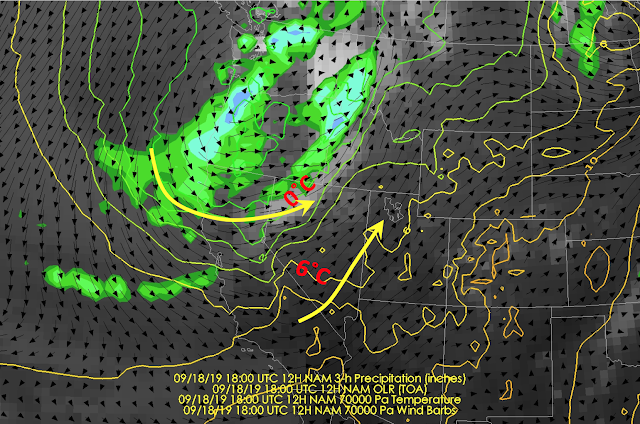 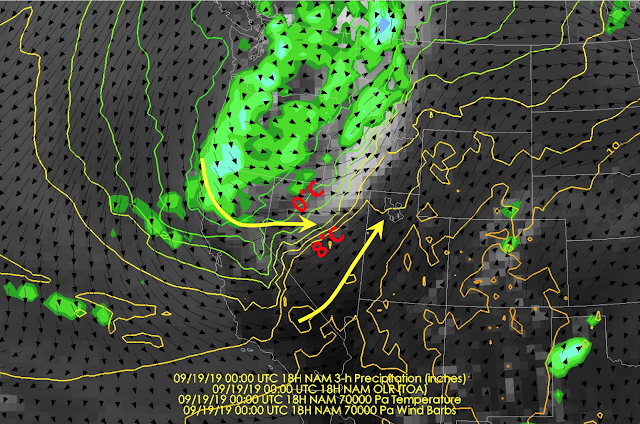 During the same period, low-level pressure troughing, indicated below by the 850 mb (about 5000 ft above sea level) height analysis, strengthens over central Nevada, Idaho, and Montana along the developing front. 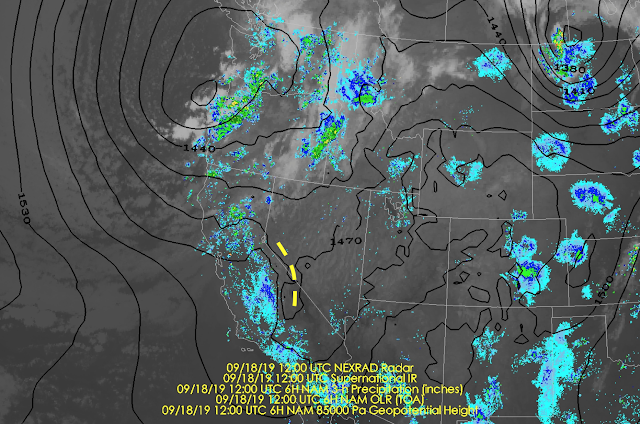 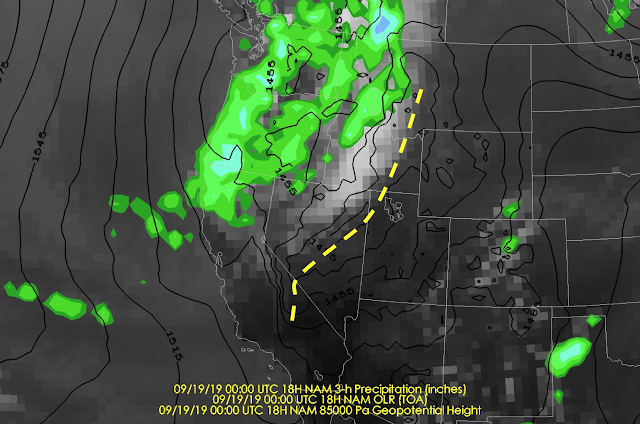 This is a classic case of Intermountain Frontogenesis, or frontal development over the Intermountain West, which is common in the fall and the spring.  Several factors contribute to frequent frontal development in this region including flow interactions with the Sierra Nevada, downslope warming in the lee of the Sierra Nevada, and the contrast in cloud cover across the front, which allows for daytime strengthening due to more intense heating of the prefrontal airmass.  In some instances, precipitation also cools the postfrontal airmass, although in this case the forecast precipitation (indicated by green and blue shading above) is too far behind the front to have a strong influence.

Salt Lake City will be prefrontal today, so enjoy the wonderful fall weather.  The front is a slow mover once it gets near northern Utah, so timing frontal passage may be difficult for Salt Lake City.  It happen overnight or as late as tomorrow afternoon.  The front may meander back and forth across some locations.  The high-res NAM, for example, stalls the front over northern Utah tonight and places it over Salt Lake County at 1800 UTC (1200 MDT) tomorrow.

Much will depend on the exact placement of the front.  Keep an eye on forecasts.  Note, however, that the frontal passage itself appears to be dry.  Precipitation is well behind the front, with chances of showers not increasing until Thursday night (if not later).  Amounts for Thursday night and Friday are a bit of a crap shoot, with the ensembles putting out everything from near nothing to nearly a half of an inch at the Salt Lake City Airport.

If you are feeling wonkish about these events and are willing to take a deep dive, a detailed analysis of a similar event, including diagnosis of key processes, is available from West and Steenburgh (2010).
By Jim S Posted at 9/18/2019 08:47:00 AM