The Long and Impactful Life of Dorian

By any measure, Hurricane Dorian has already had a long and impactful life, beginning as a tropical wave of western Africa, developing into a tropical depression at 1500 UTC 24 August (the easternmost triangle below), and then strengthening into a tropical storm and hurricane as it continued its march toward the Bahamas.

Dorian reached category 5 status in the Bahamas, where it stalled over Grand Bahama and caused incredible damage.  It then curved along the southeast coast of the United States, remaining just offshore of Florida, Georgia, South Carolina and most of North Carolina.  At 0900 EDT, the National Hurricane Center reported that Dorian made landfall at 0835 AM over Cape Hatteras.  As illustrated by the radar image below, Cape Hatteras (HAT) was within the eye. 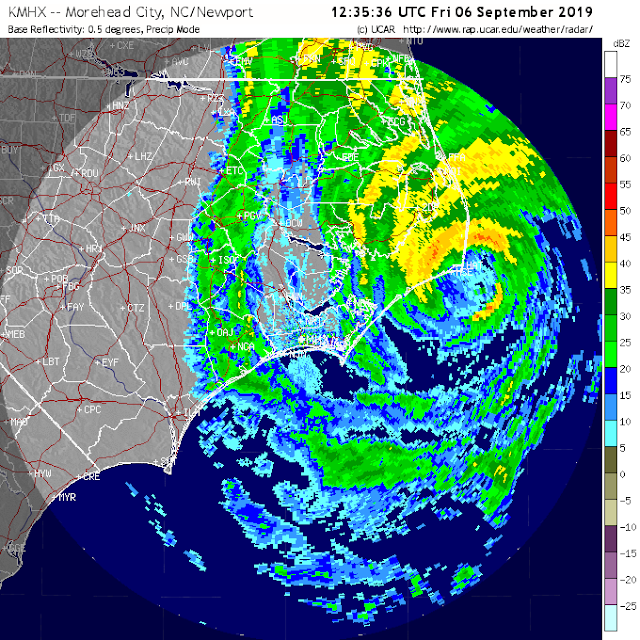 Although this will be the only landfall in the U.S., Dorian has a long life ahead and is likely to make at least one more landfall.  In fact, Dorian is going to have some major impacts on the weather not only of eastern North America, but also Europe.

The latest GFS forecast shows Dorian moving off the coast of the Carolinas, moving northeastward, and then curving through eastern Canada.  In this forecast, the low center makes landfall in Nova Scotia, although there is some uncertainty in the precise track.  Further, note that Dorian strengthens as it moves northward.

In fact, it is likely that Dorian will be a strong system as it moves through eastern Canada.  How can this be?  Shouldn't a hurricane weaken over the cooler waters?

Perhaps, but hurricanes sometimes experience extratropical transition as they move into the extratropics.  Essentially, the energy source for the cyclone transitions to that typically associated with extratropical frontal cyclones.  In this case, Dorian is benefiting from interaction with a very favorable midlatitude pattern with a broad trough over eastern North America and two embedded short-wave troughs (brown dashed lines) that will contribute to its extratropical transition. 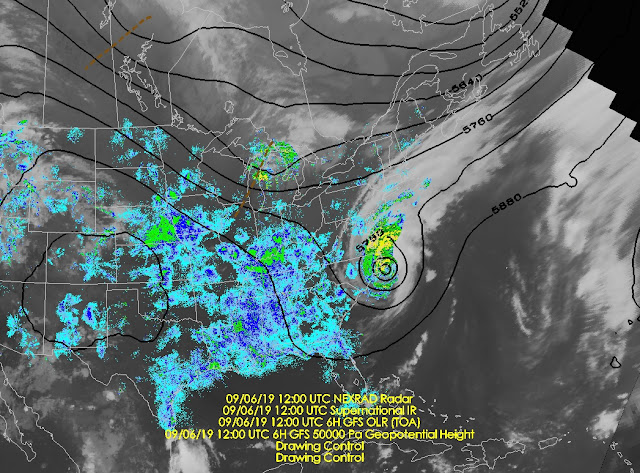 In the loop below, you can see how each of the short-wave troughs overtakes Dorian and contributes to the upper-level (and synonymous lower-level) development.

The results of all of these tropical and extratropical shenanigans is that Dorian is likely to a be a beast as it moves through eastern Canada.  The low-level (900 mb) wind and temperature pattern below shows the classic frontal structure of an intense extratropical marine cyclone with a warm core seclusion wrapped by an intense temperature gradient known as a bent-back front rearward of the low center.

Thus, although Dorian will be weaker than it was in the Bahamas, it is expected to produce tropical storm force and possibly hurricane force winds in portions of eastern Canada.  In fact, Environment Canada has issued rainfall and wind warnings and a hurricane watch for Nova Scotia.  Below are the latest for Halifax. 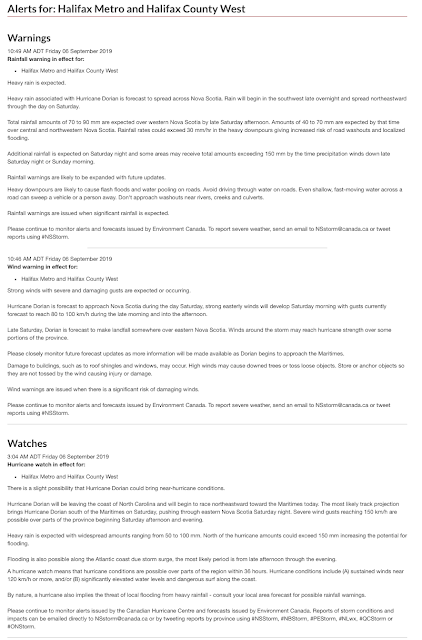 But it doesn't end there.  As Dorian moves further northward and eastward, it builds a ginormous upper-level ridge over the North Atlantic (see top panel below).

This ridge progresses eastward and eventually results in a closed low and cold-air surge into the Mediterranean Basin.

So, the impacts of Dorian are widespread.  Further, although it is weaker, you can see Dorian moving across the North Atlantic and just below Iceland in the bottom image above.  It's fate beyond that is less certain, but perhaps it will find a way to survive into the Arctic?  Sadly, I've run out of time today, but maybe we'll take a peek in a future post.
By Jim S Posted at 9/06/2019 08:53:00 AM