A Tricky Case of Downstream Development

You may have heard some rumors of potential mountain snow in the extended-range forecast.

From a forecast perspective, it's a tricky case of downstream development in which a high-amplitude ridge develops over the North Pacific, which leads a deep trough digging into the western United States.

Below is the dynamic tropopause (jet-stream) level forecast from the GFS valid at 0600 UTC (0000 MDT) Sunday.  Note the high amplitude ridge over the Gulf of Alaska and the deep trough along the Pacific coast of the continental U.S.

Such a trough will bring some cold air to the western U.S., but the details of the downstream development, such as the strength and position of the trough, embedded disturbances within it, and interactions with Pacific moisture, are difficult to anticipate with precision at this time.

For example, we could look at the 42 forecasts produced by the North American Ensemble Forecast System (NAEFS), which we downscale and apply some algorithms to for estimating snowfall at specific points in the western U.S.  One of the 42 forecasts generates over 20 inches of snow at Alta-Collins this coming weekend (see lower left-hand panel).  A total of five generate 8 or more inches of snow.

Exciting, but 36 members produce no snow at all as although a number of members produce precipitation, most don't bring the cold air in fast enough to lower snow levels to Alta-Collins level over the weekend.

I call these "Gimli" forecasts after the dwarf warrior in Lord of the Rings, whose quote below is one of my favorites. 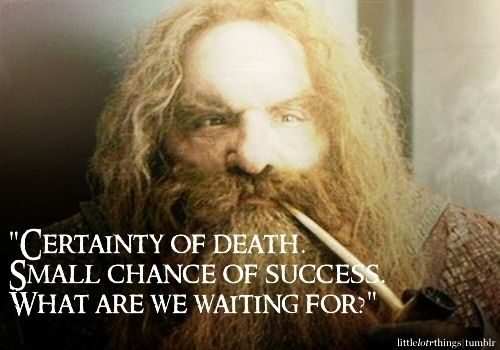 Basically, mountain snow this weekend is a possibility, but significant accumulations by Sunday afternoon are a low probability possibility based on current forecasts.  Keep an eye on forecasts, but recognize there are a number of possible outcomes depending on how things come together.
By Jim S Posted at 9/23/2019 10:35:00 AM