Readers of this blog know that I frequently discuss issues with lightning safety at outdoor stadiums.  Prior to yesterday's game, I discussed the difficulties of the game-day forecast and the potential for thunderstorms during the game (see prior post Difficult Game Day Forecast).

I did not catch the start of the game as we were out with friends, but when I turned on the game at some point into the first half, I heard some discussion about their camera people leaving for safety.  Nevertheless, the game was going on.  I thought this was quite odd.  They returned to the field at some point and the game went on, with the Utes achieving a convincing victory.

This morning I decided to look into things.  Information on lightning strikes is available at lightningmaps.org.  According to their site, there was a lightning strike 4.3 km (2.7 miles) from Rice-Eccles stadium at 2:49 UTC/8:49 PM MDT during the game. 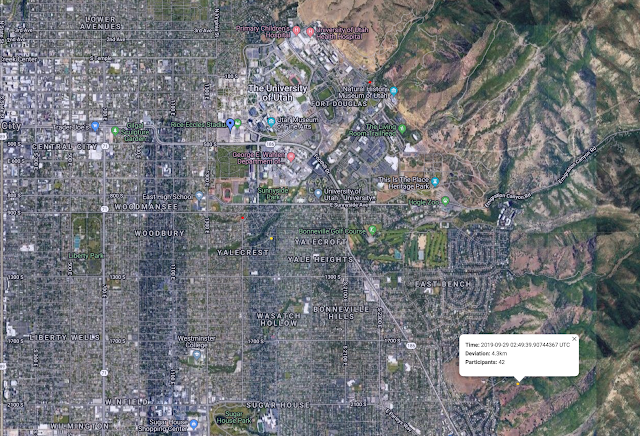 The NCAA Sports Medicine Handbook (available here) has an entire section on lightning safety.  To quote, "lightning is the most consistent and significant weather hazard that may affect intercollegiate athletics."  In it, they note that NOAA estimates that 62% of lightning strike fatalities occur during outdoor organized sport activities.  During this season's Utah-BYU game there was a delay due to a nearby lightning strike.  Nobody likes these delays, but they are important for participant safety.  Further, they are also important for spectator safety.  The American Meteorological Society Statement on Weather Safety at Venues and Public Gatherings (available here) provides some examples of lightning and other severe weather fatalities and injuries at outdoor events.

I don't know why last night's game was not stopped.  I do believe the U and whoever they have monitoring the weather should review their protocols.
By Jim S Posted at 9/29/2019 09:48:00 AM

Email ThisBlogThis!Share to TwitterShare to FacebookShare to Pinterest
Labels: Lightning