Perspectives on Higher Education from Austria

After a few months in Innsbruck, I'm slowly but surely getting a handle on the similarities and differences between higher education in Austria and the United States.  I should note that these are based on the orientation I received as part of my Fulbright award, interactions with faculty and students at the University of Innsbruck, and discussions with Austrian and American Fulbright students last weekend in Strobl.  While this yields more informed impressions than I could receive in the US, my education is still incomplete and based on a small sample size, which you should keep in mind as you read further.

Perhaps the most significant difference between higher education in Austria and the US is cost.  Austrian Universities are tuition free through the master's level (within a reasonable time period).  Not all Austrians can go to University, but those who can and do face much lower financial burdens than US students.

On the other hand, in Austria there is less experimentation to find a major, advising is more limited, and student-to-faculty ratios are higher.  U.S. higher education is costly to the student, but has a more customer-service oriented approach.  The Austrian system seems to be more sink or swim.

Austrian universities focus on education.  There are some extracurricular opportunities to be had, but they are relatively limited.  They don't spend millions on sports stadiums.  You also won't find a giant bookstore here pedaling University branded clothing.  In fact, it was only this week that I saw a t-shirt downtown with the University of Innsbruck logo on it, and this was at a tourist shop in the old town. 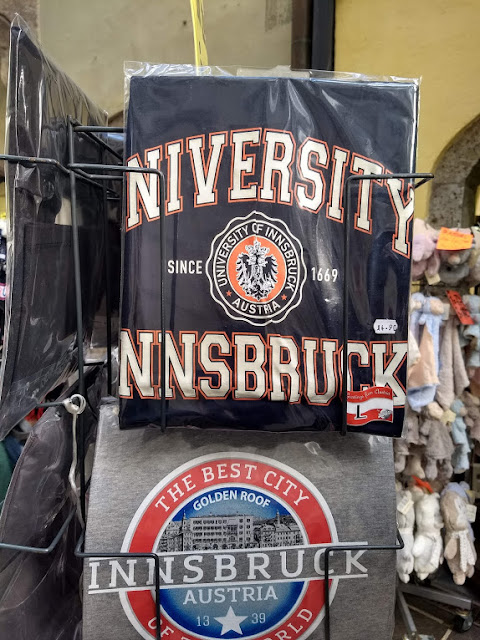 Finally, students here at the University of Innsbruck are less stressed than American students.  I thought this might just reflect the small sample of students I am interacting with, but my Fulbright colleagues made similar observations at their institutions. I think, however, that there is more to it than low cost.  One can thrive here with out a car (although housing expenses are high).  Materialism is lower.  Cultural expectations seem to emphasize life experiences and balance.  Social time is prioritized.  This should not be interpreted as lack of commitment and motivation.  The young scientists and faculty here are very dedicated and hard working.

The above is simply some reflections and not an endorsement of one system over the other.  I do think that public higher education and vocational training in the U.S. needs to be less expensive and more accessible than it is today.
By Jim S Posted at 5/09/2019 02:47:00 AM