My son has been here for about eleven days and we've been absolutely skunked by the weather.  I had big plans for ski touring and alpine skiing with him, but on the days I haven't had to work, the weather has often been cloud and rainy/snowy depending on elevation.  Snow sounds good, but it's not great here due to the lack of trees at higher elevation, which means lousy visibility.

Today we decided to roll the dice on the weather and try skiing at Hintertux Glacier, which is Austria's only year-round ski area, open 365 days a year.  Lifts extend upwards 5700 vertical feet to a top elevation of 10,663 feet, although today you could only ski down to 6250 feet, for a drop of about 4,400 vertical feet.  Not too shabby.

Hintertux is less than 30 km (18 miles) from Innsbruck as the crow flies, but about 90 minutes by car or 2.5 hours by train and bus.  After 4 months of public transit, I rented a car for this trip.

As I mentioned it was a roll the dice day.  South flow was impinging on the Alps.  Downsloping flow in the northern Alps led to generally nice conditions there with just some clouds over the mountains, but Hintertux sits near the Alpine divide.   It is more vulnerable to spillover from the east side.  Modis imagery shows the situation in the early afternoon with substantial clouds to the south, clear skies over the Zillertal (which one travels up to get to Hintertux), but just a narrow clear slot over the Tux Valley which Hintertux sits at the top of. 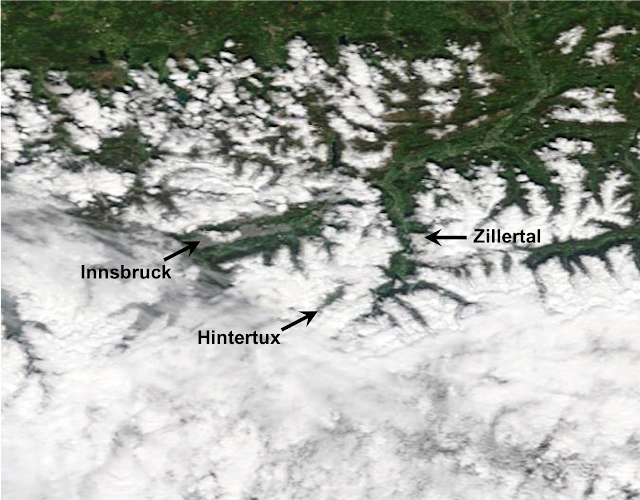 The weather situation when we arrived provided a reasonable summary of the day.  Generally clear of the valley, but spillover across the crest mean in-cloud conditions on the ridge. 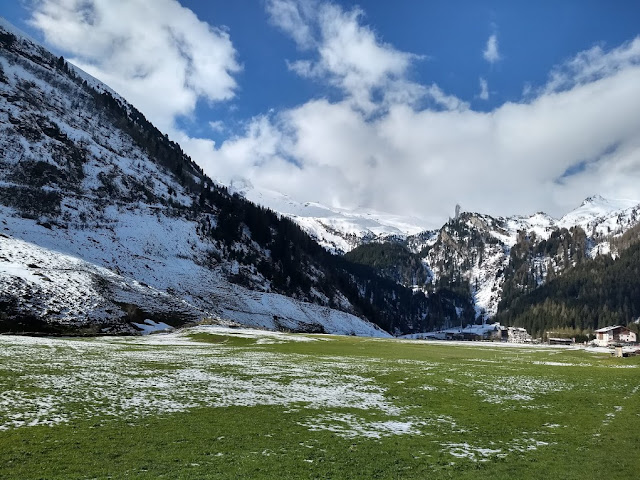 As a result, visibility was generally good on the lower half of the mountain, good to fair above that for another 1000 vertical feet or so, and terrible to awful above that.

Here's the initial tram ride from the base.  Beautiful! 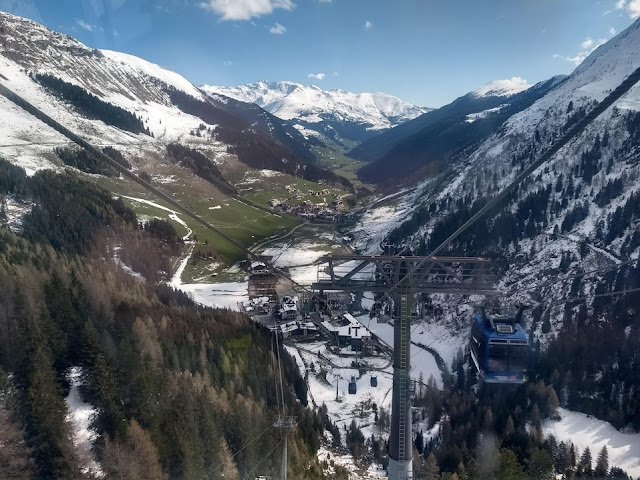 Two trams above that and you find the summit chair.  Visibility awful!  Reminded me of many rides on Chair #2 at Alpental when I lived in Seattle, except it was -6˚C, much colder than one often found there. 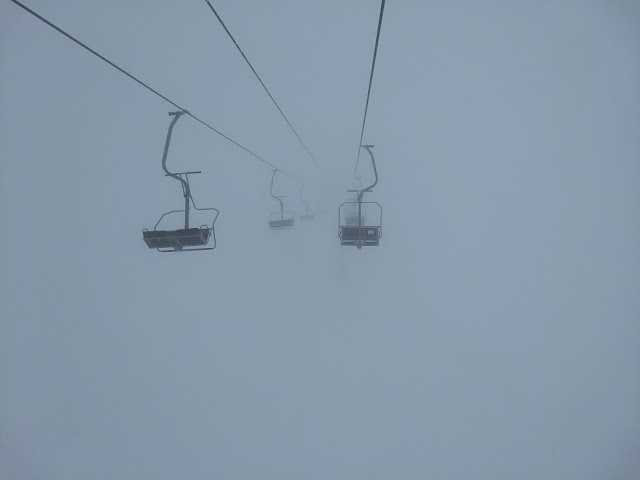 In between it wasn't so bad and at times quite nice.  Views down to the Tux Valley were quite spectacular. 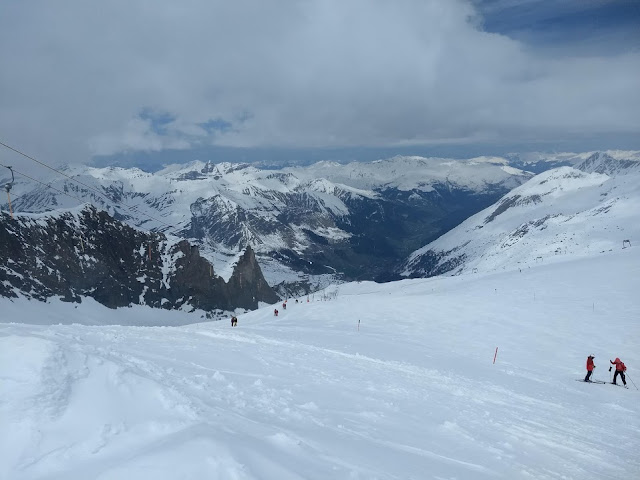 In addition, the skiing in areas was quite good with some creamy fresh in off-piste, low-angle terrain. 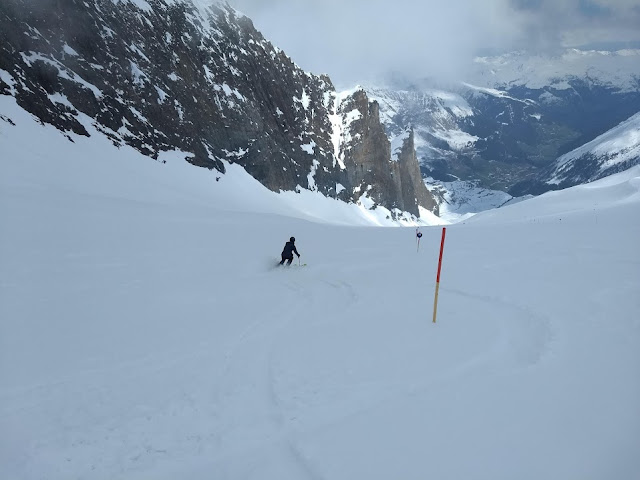 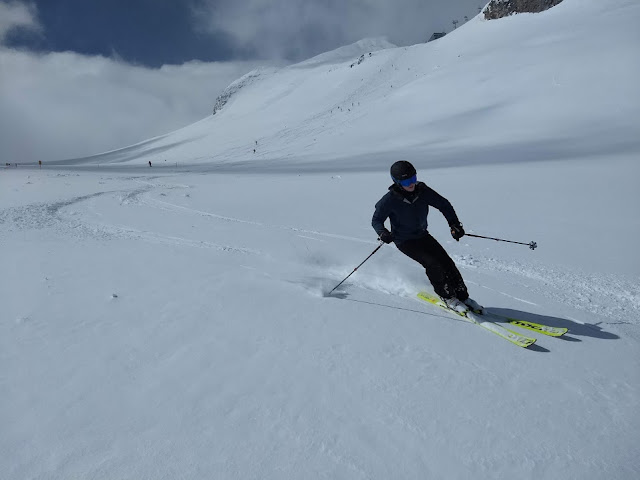 In fact, we were still finding untracked cream until we quit a bit before 3.  It's a big place and has more pitch than Stubai Glacier, the other late season resort in the Tirol.  Plus, many of the skiers were racers at camp or instructors doing clinics and sticking to piste.  Sucks for them.

I do need to share one complaint, however.  They have three trams that will take you from base to summit, but the top two were closed for unknown reasons.  As a result, one needed to take an old 4-passenger gondola.  Perhaps not a big deal, except modern skis, even my son's Stöckli rentals, were too wide to fit in the outside slot and barely fit diagonally in the gondola.  We took several cramped lift rides straddling the skis.  First world problems I know, but inconvenient nonetheless. 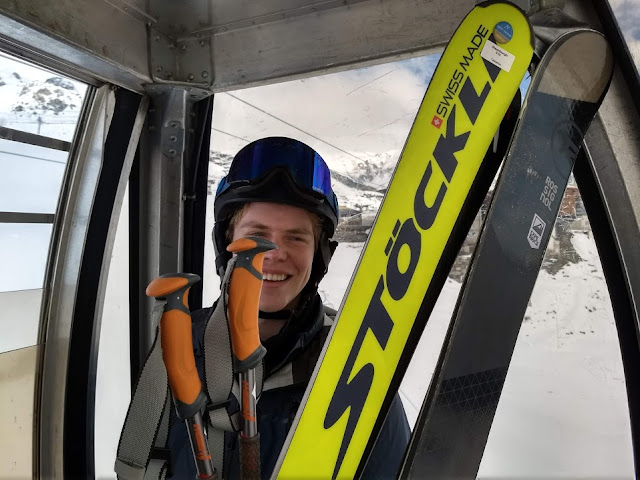 Our snow-safety lesson for the day was provided in the early afternoon when wet slabs released on the lower mountain, one running across the piste. 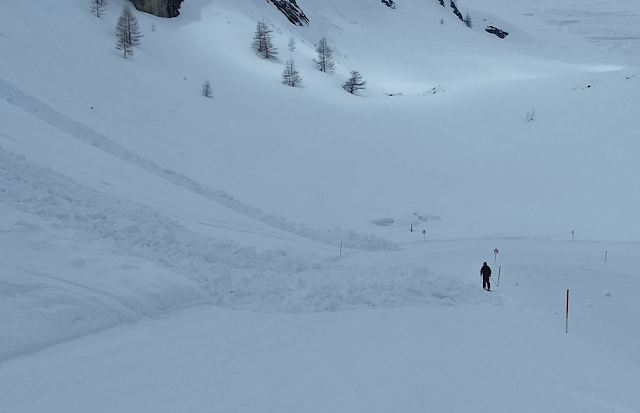 These were almost surely triggered by off-piste skiers above the groomed run in steeper terrain just above the cliff band in the lower photo.  Unlike the upper mountain, this area was quite warm and conditions were ripe in the afternoon for slides of this type.

Really, I feel fortunate the weather was as good as it was.  After finding sunny skies frequently for the first four months of our trip, the past two weeks have been meteorologically challenging.
By Jim S Posted at 5/17/2019 01:23:00 PM