Innsbruck has great hiking all around.  One of my all-time favorite hikes is the Goetheweg trail from the top of the Hafelekar tram to the Pfeishütte, where you can get a wonderful meal.  There's still way to much snow to attempt that right now, so here are a few photos from August 2015 to get it on your radar if you are ever in Innsbruck in summer or fall. 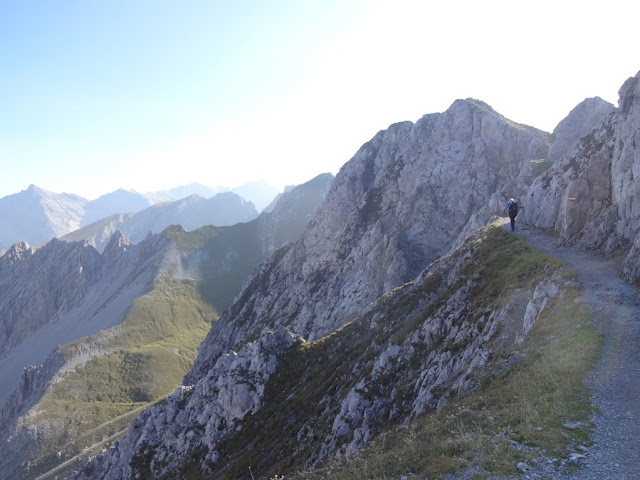 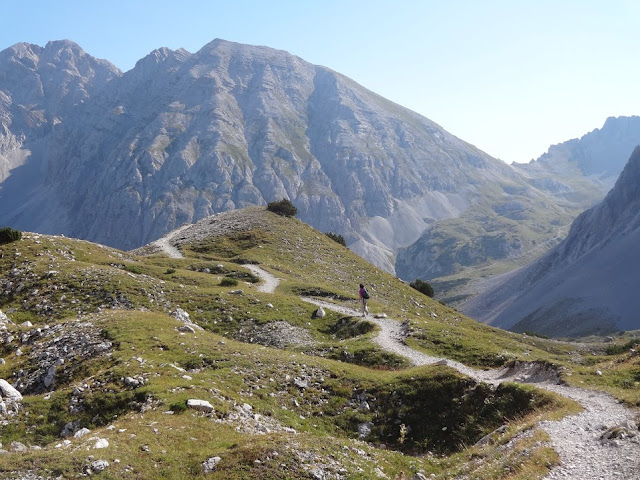 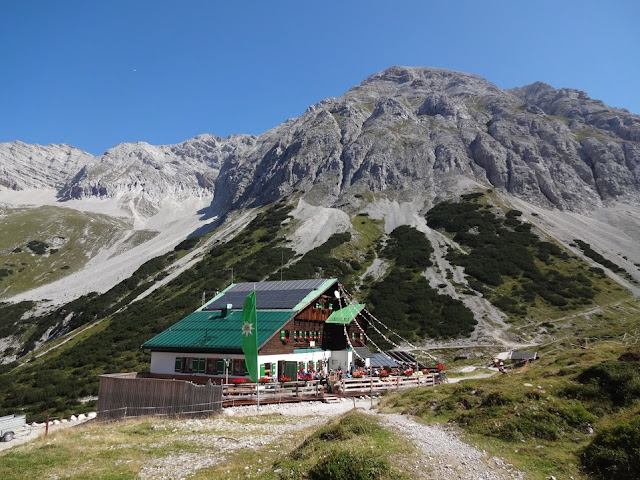 Instead, today I hiked from our apartment at 600 meters to the top of the Seegrube tram at 1900 meters.  Initially I ascended trails and gravel roads, reaching the pilgrimage chapel known as Höttinger Bild. 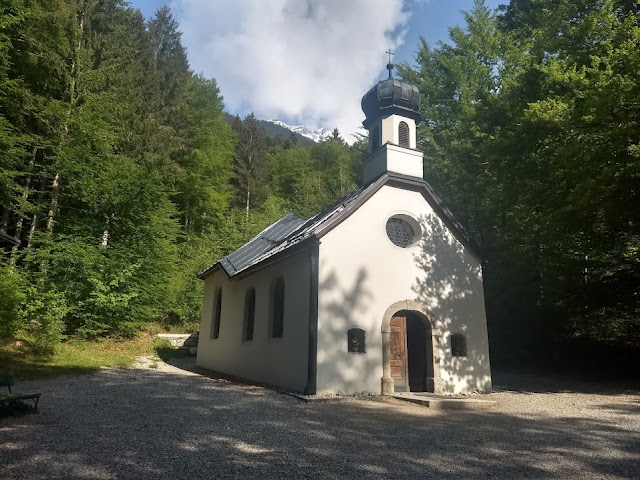 Above this I continued to ascend through forest, that was occasionally divided by enormously long running avalanche paths, some of which ran to very low elevations this past winter. 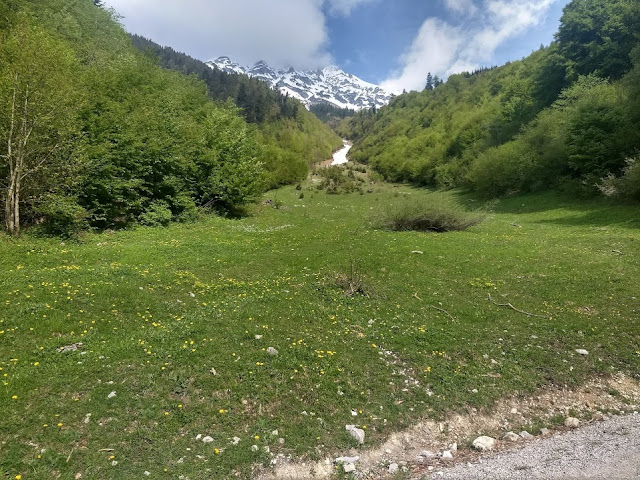 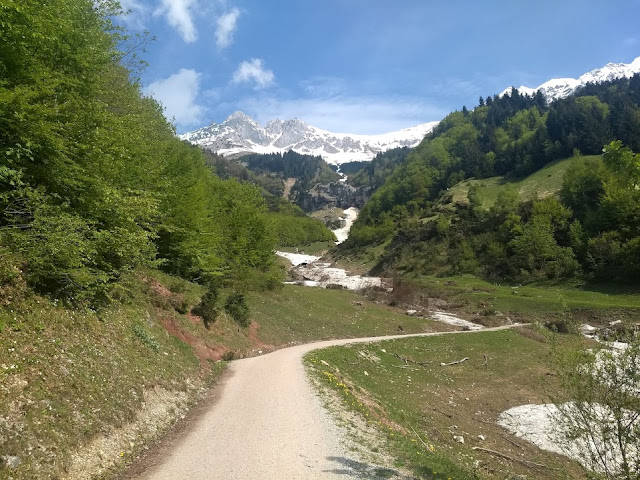 The route follows a gravel road at times, popular with mountain bikers. 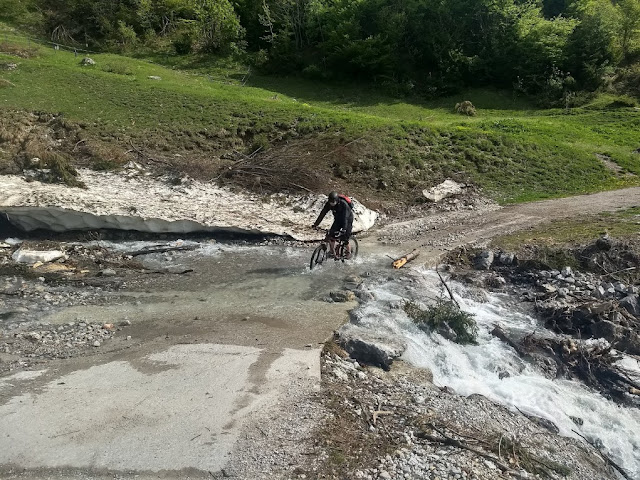 The ascent from town to the popular Höttinger Alm restaurant and boarding house is about 2700 vertical feet.  You'll see people riding both conventional mountain bikes and e-bikes to get up there.  E-bikes are very popular here.  Some days I would guess about half the people I see are riding them.

The upper 1/3 or so of the route to Höttinger Alm follows a trail.  The Alm is first mentioned in historical records dating to 1441.  The buildings were well sited as they are on a ridge between two enormous slide paths, one of which is pictured below. 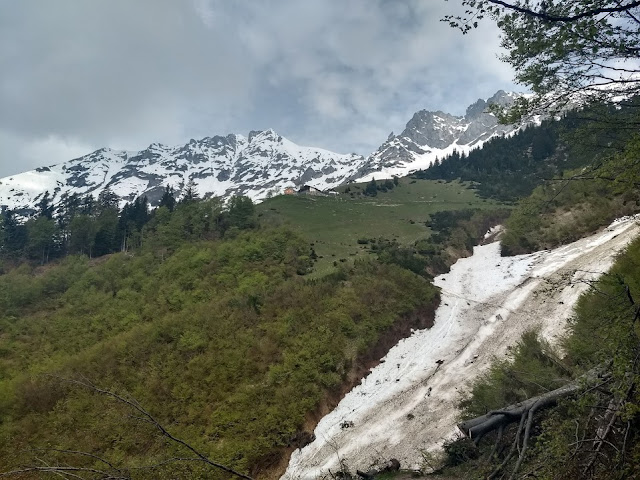 Avalanche season has not ended here yet.  It snowed above 2000 meters on Monday and slides ran to below the elevation of the Alm (about 1500 meters) and buried the access road (pictured at right below) even deeper than it was already. 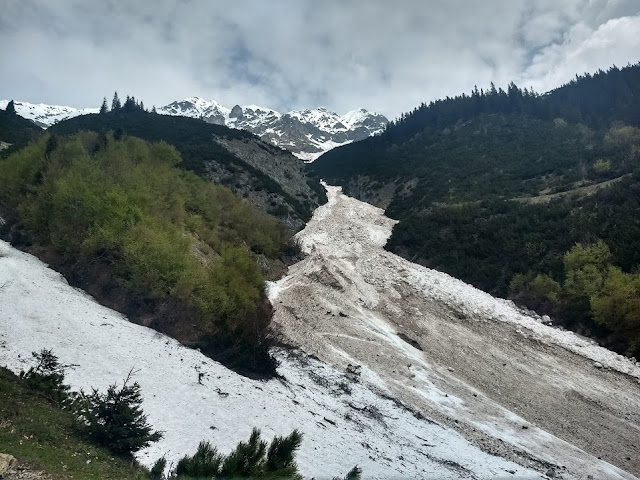 You'll find a mixture of hikers and mountain bikers up here thanks to the gravel road access.  I arrived fairly early in the morning, so it was fairly quiet.  I fueled up on strudel and "skiwasser," which is water with some raspberry juice added. 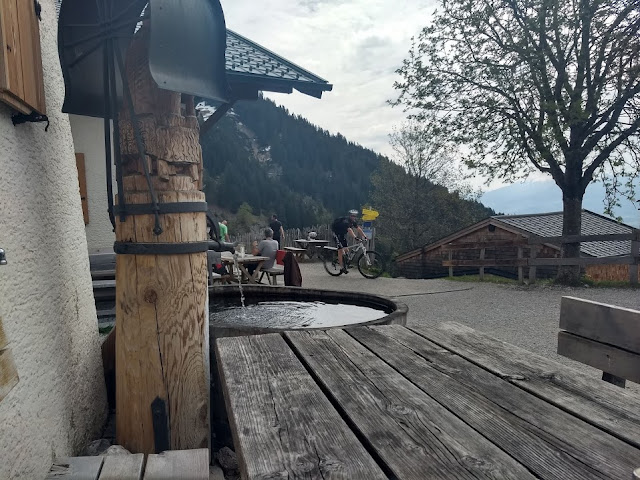 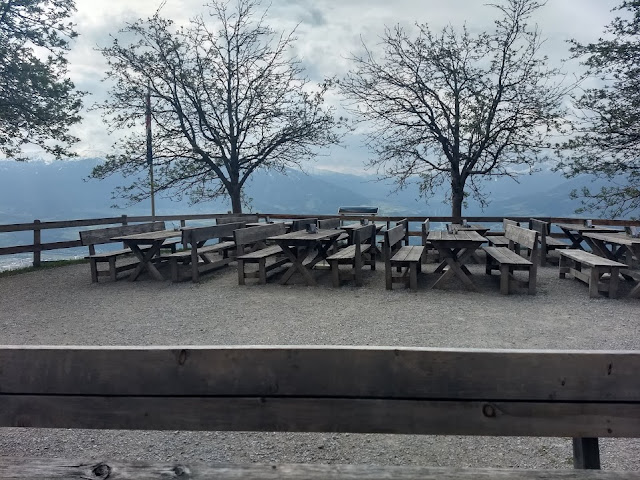 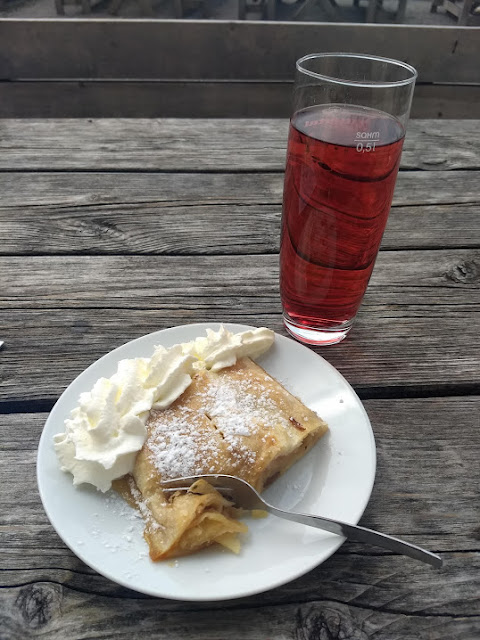 The menu included some beautiful photos from the previous winter. 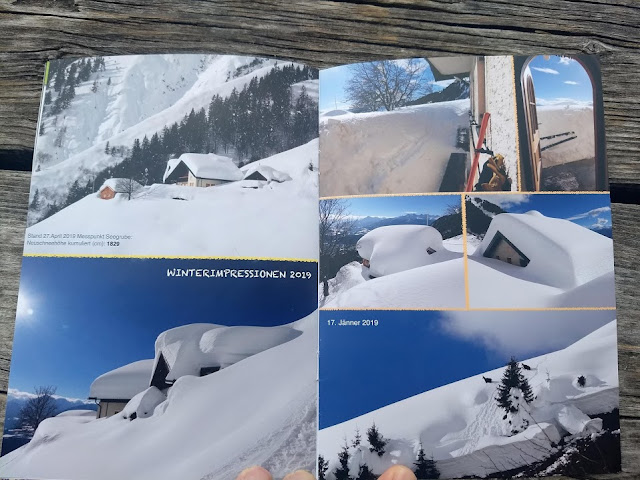 Leaving the Alm, my route took me across the slide path that was reburied a few days earlier, where there was a well worn path.  I wondered if there were any close calls when the slide came down given the large numbers of hikers and bikers that travel to the Alm. 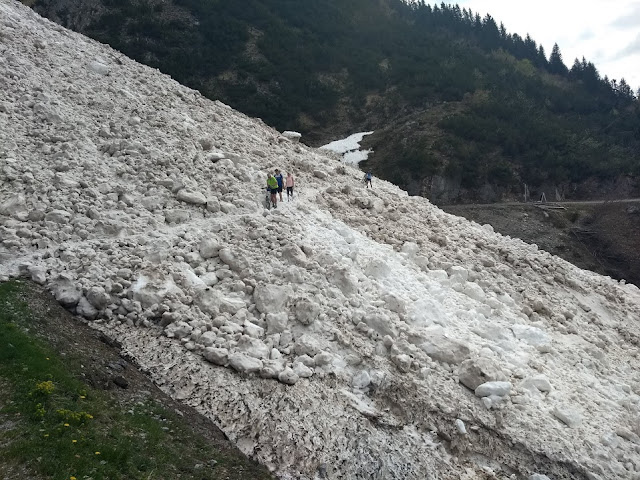 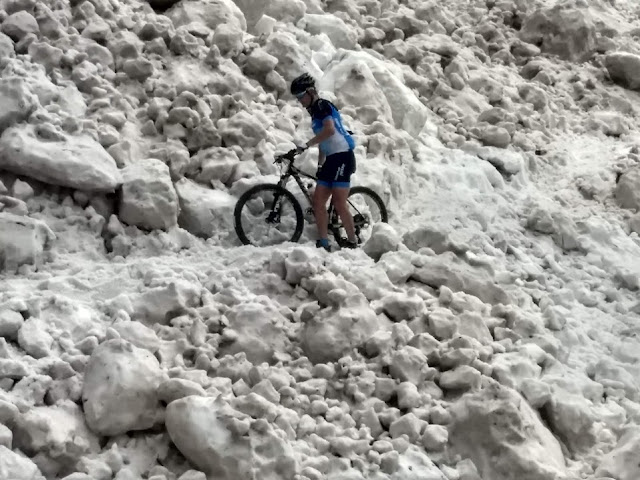 A view back to Höttinger Alm. 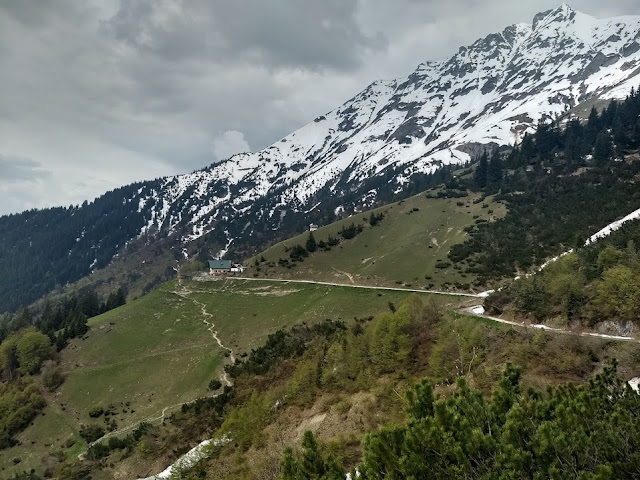 At this point, I wasn't sure what to do.  I could descend back to town, or attempt to ascend to Seegrube and take the tram down.  The route to Seegrube was unknown to me and would probably involve some snow travel.  I opted for the latter and found the route to be fairly straightforward, initially following a melted-out avalanche path (which did not connect to high terrain) and eventually following a rounded ridge to Seegrube.  Snow conditions were supportable but not firm, allowing for easy travel. 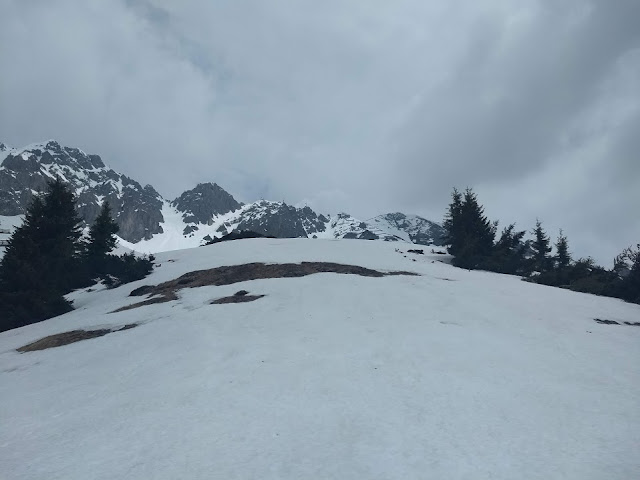 After returning to Innsbruck, I observed real human suffering in the form of the Innsbruckathon, an 11 km race with 17 obstacles.  Apologies for the sun-blocked covered lens (all too common given my solarly challenged skin). 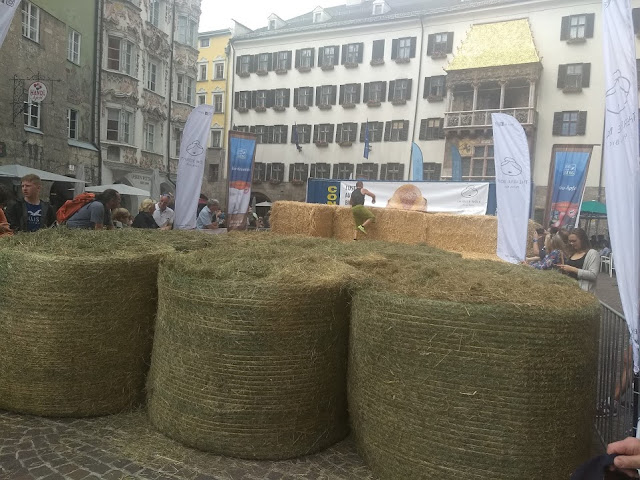 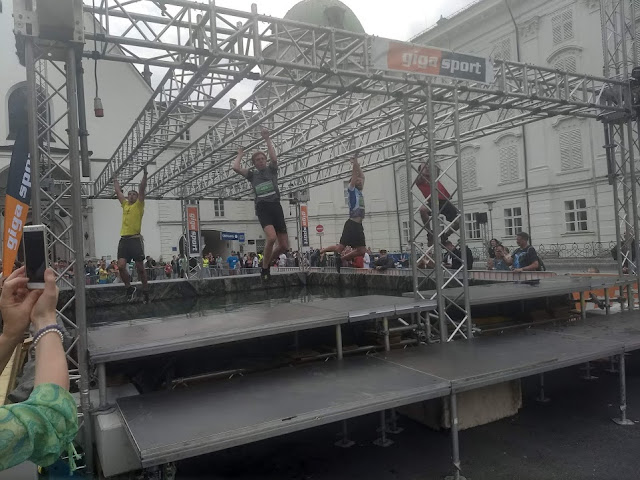 The looks on the faces of people monkey barring across the obstacle above was one of pain as it was very near the end of the race.  The guy who just shook his head and walked through the pool earned a lot of laughs and probably had the fastest time for the obstacle.