The Nordkette (Northern Chain) rises abruptly 1700+ meters above Innsbruck.  Numerous avalanche paths dive deeply into the lowlands and toward populated areas just above the Inn Valley floor.  I was reminded of this frequently this past winter as I heard the sound of avalanche control work many mornings at my office, despite the fact that it is on the Inn River and not near the Nordkette summit.

Today, my son and I hiked across the runout zones for many of these avalanches, beginning in Hungerberg and traveling past two mountain huts at Arzler Alm and Rumer Alm, as pictured below (locations guesswork). 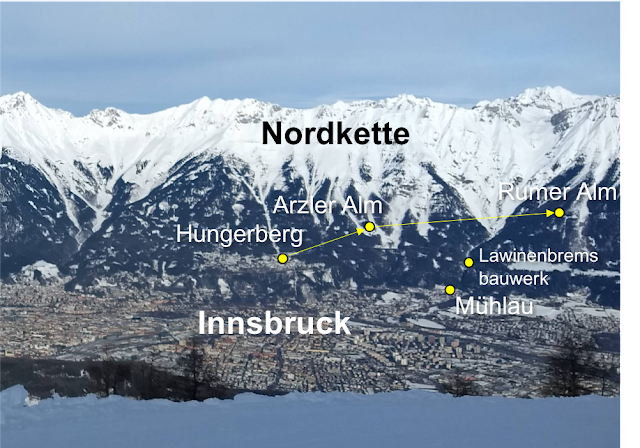 The photo was taken by me on February 7th on the Patscherkofel.  About a month prior, on January 13th, a colleague from the University of Innsbruck sent me the e-mail below about how dire the avalanche situation was after the huge snows of early January.

Indeed we have lots of snow in most parts of Austria north of the Alpine crest.  Actually too much and more is coming until Thuesday. We have currently avalanche danger 4 (high) in whole Tyrol and 5 (very high) in the Arlberg region!  Since the beginning of January we have been affected by strong northwesterly flow with lots of orographic precipitation north of the Alpine crest. At Seegrube north of Innsbruck we probably will reach a snow depth of 4 meters tomorrow. Many roads and even some train routes are closed due to avalanche danger. Some residents in the village of Gnadenwald not far from Innsbruck living in the so-called "red zone" have been evacuated and even at Hungerburg (district north of the city) residents have been instructed to stay inside and close windows and shutters due to avalanche risk.

Our hike showed just how serious the situation was and why when you see a sign like this, you should sometimes turn around. 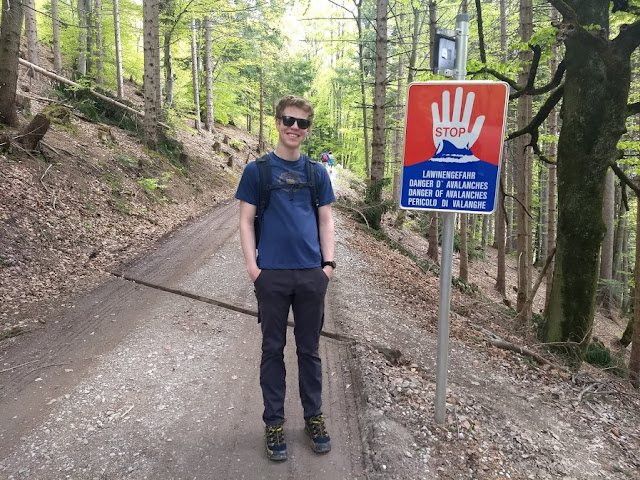 Here are a few photos taken looking across, up, or down some of the paths, in which Herculean cleanup efforts are underway.  You will see some of the passive avalanche systems that exist in the runout zones. 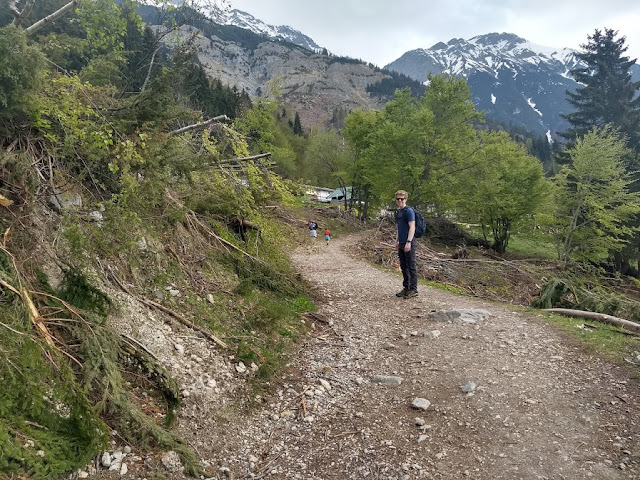 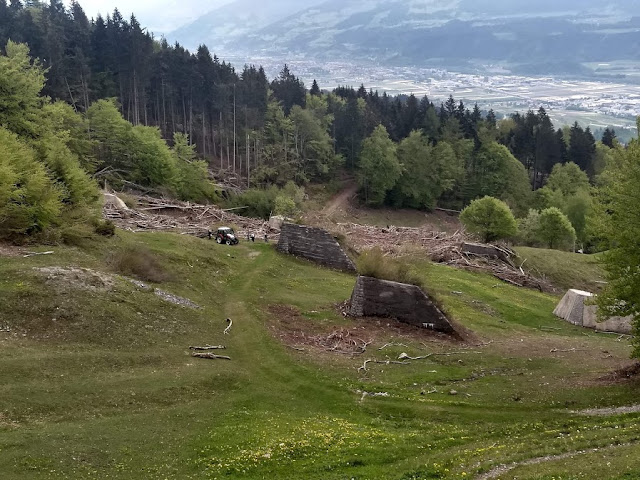 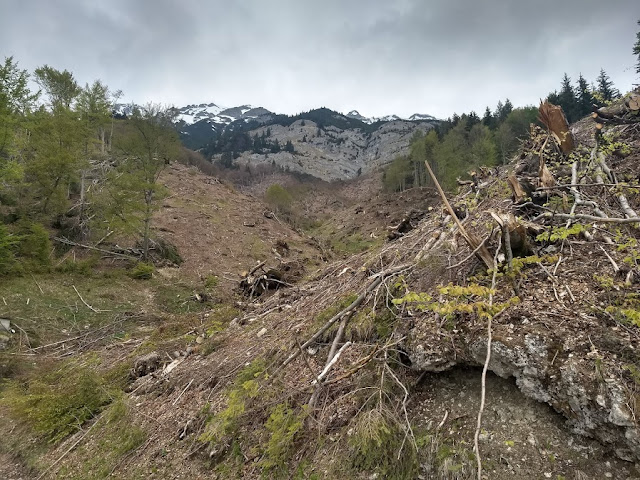 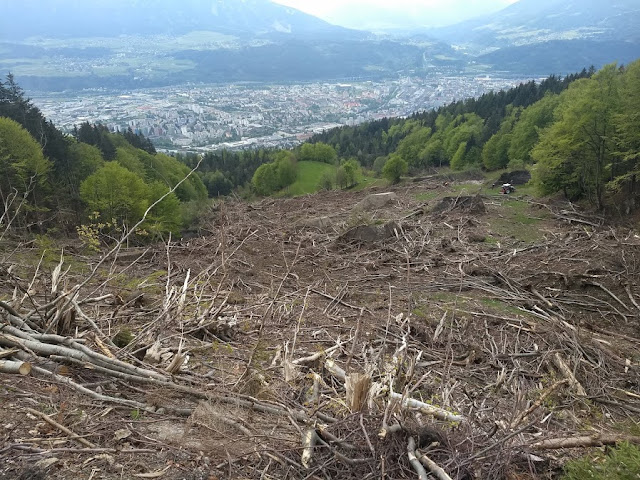 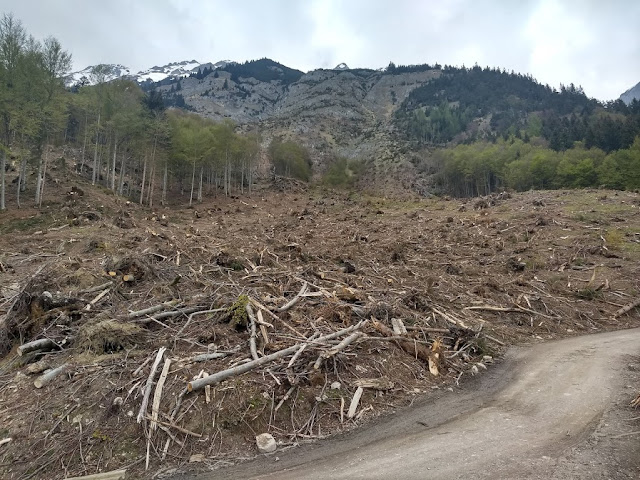 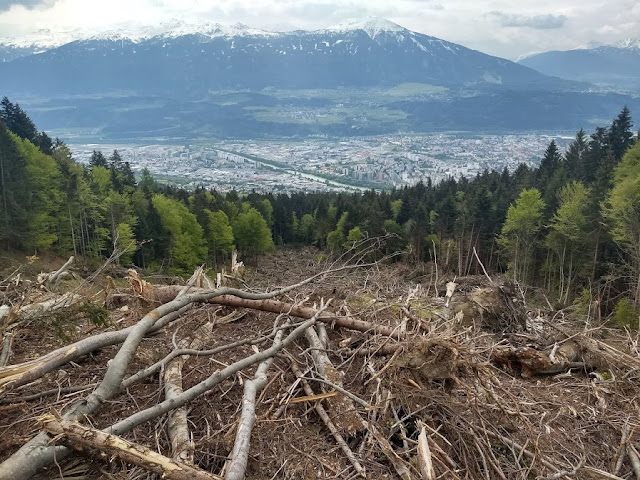 The avalanches in some cases brought down some big timber.  I didn't count the rings on these, but I suspect they were at least 30 years old. 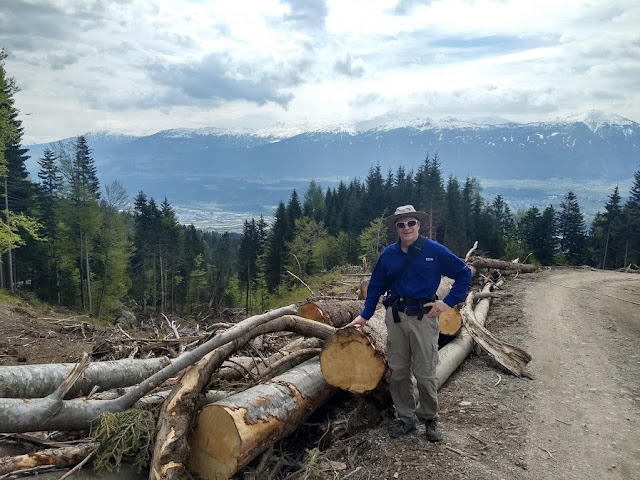 In some areas chaos reigned supreme with narrow fingers ripping through new timber. 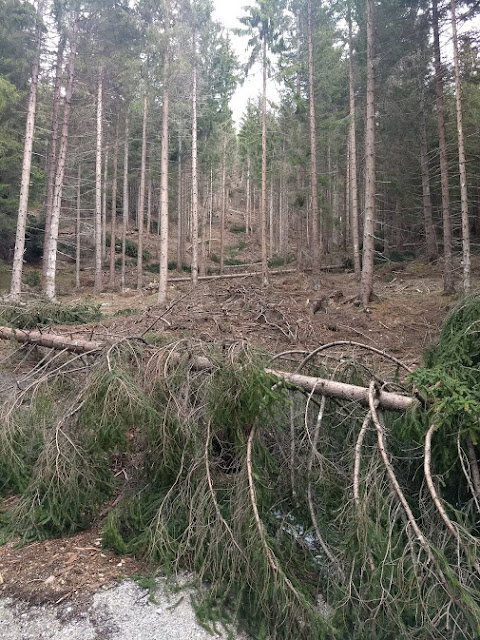 The people who selected the Artzler Alm hut location knew what they were doing.  Note the slide path on the left.  Not evident here is another one that's about 100 meters past the hut.

A major effort was underway to clean up the alm (pasture).  I don't know if these people were volunteers or paid, but kudos to them for their efforts. 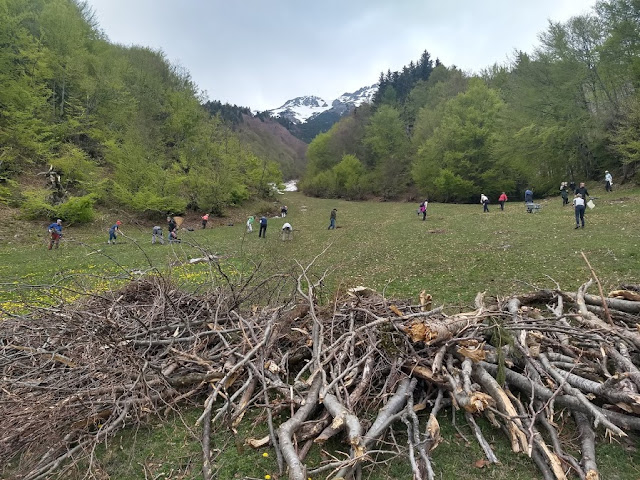 Our route out took us past the Lawinenbremsbauwerk, a huge avalanche breaking structure above the village of Mühlau. 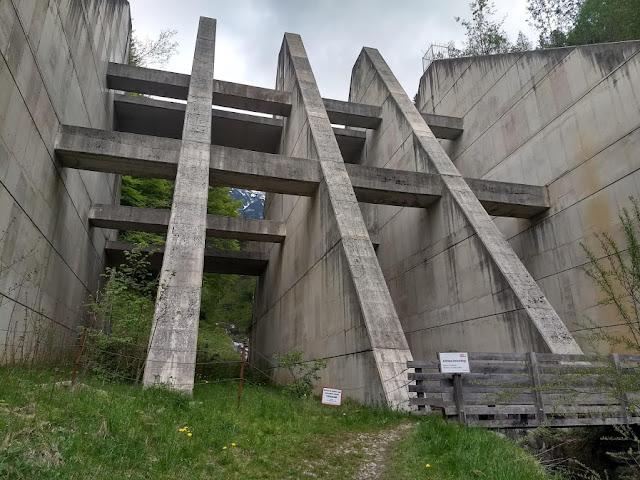 I've identified the approximate location of this structure in the photo at the beginning of this post.  It sits in a narrow klamm (gorge) into which avalanches from multiple starting zones and slide paths converge.

If my interpretation of the sign picture below is correct, it was built for 3.6 million Euro from 2003–2007, is comprised of 5,500 cubic meters of concrete and 510 metric tons of steel, and stands 23 meters high.  Some information on the 1951 avalanche noted below is available here (in German). 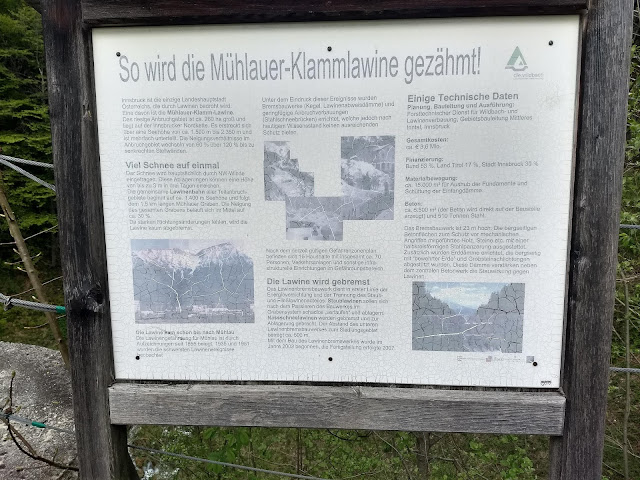