One advantage of living in Innsbruck is the close proximity of the mountains for ski tours.  I haven't slapped on the skins since arriving here due to the late arrival of our bags, so I thought I'd get a workout in yesterday at one of the local ski resorts.  In general, the resorts here are friendly to tourers, with most simply asking you stay to the side of the trail or follow a designated route, and that you ski during operating hours to avoid issues with grooming equipment, especially winch cats.  It's not powder skiing, but for a quickly after or during the work day, it's a good option.

Yesterday afternoon I went to the Patscherkofel ski area for a couple of reasons.  One is that we can see it from our apartment. 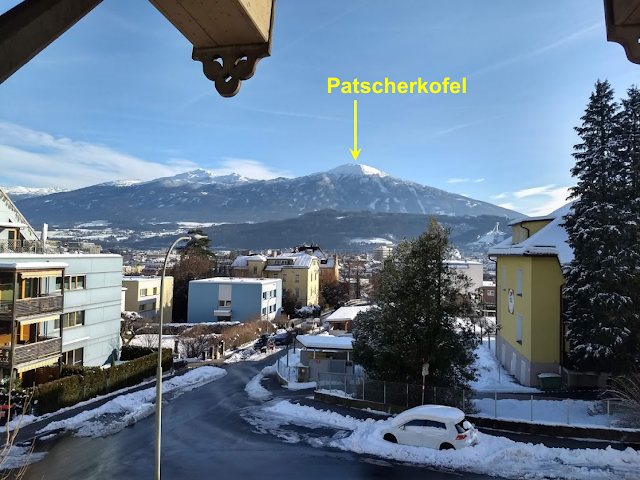 The other is that it lies at the end of the bus line that is about a 5 minute walk from our apartment, so it is quick and easy to get to if one is aiming to minimize travel time.  Further, that bus line is free if you are carrying skis.

Patscherkofel is a "small" Austrian ski area.  Which means it has only one major lift, but it is a 65 million euro gondola that covers 960 vertical meters (about 3150 vertical feet).  Thursday nights they keep the top station restaurant at timberline open until 10 PM for ski tourers, although I elected to ski in the afternoon and descend prior to dusk given my lack of knowledge of area.

The big advantage of Patscherkofel is proximity.  From a meteorological perspective, Patscherkofel is in a tough spot.  The photo below, taken from the Nordkette on the other side of the Inn Valley, shows it is largely surrounded by higher terrain, which means it gets the leftovers.  In addition, it is adjacent to the Wipptal (Wipp Valley), which connects to the relatively low Brenner Pass, and is thus exposed to strong, southerly, Foehn winds. 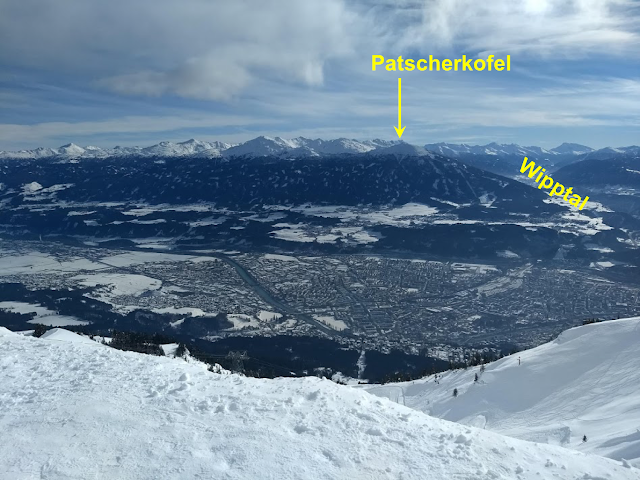 Yesterday though, it was calm, although it was hazy with some clouds around.  Nevertheless, as usual, the views were spectacular.

The route follows at least in part the Olympic downhill route on which Franz Klammer famously won the 1976 gold medal.  As far as Olympic downhills go, this one is not especially steep, although there are a couple of short sections where you go to maximum stilt, keep the skis flat, and hope you don't slip.

I've seen a lot of people with touring skis here, but so far, mine are the fattest I've seen!

The Hahnenkamm is today at 11:30 local time.  We were going to alpine ski at Patscherkofel tomorrow and catch the race at the resort where they were going to be broadcasting it, but they moved the race up a day due to weather (and clouds are still an issue).  Tomorrow, the Steenburgh effect reverses as we should get some snow, although it's unclear how far into the Alps the snow will push.
By Jim S Posted at 1/25/2019 01:29:00 AM