Dumpage in the Northern Alps

It has been a remarkable start to 2019 in the northern Alps where snowfall has been frequent and heavy, including in low elevation areas in the Alpine foreland (i.e., foothills).  We'll focus here on the Loser-Altaussee ski area southeast of Salzburg and indicated by the red thumbnail below.

Snow depths being reported for the resort on bergfex.com this morning are 250 cm (100 inches) in the valley and 490 cm (nearly 200 inches) on the upper elevation.  I'm not sure how good those numbers are, so it is worth an eye test.  Here's a shot from the camera at the top of the resort as the sun set this afternoon.  Deep. 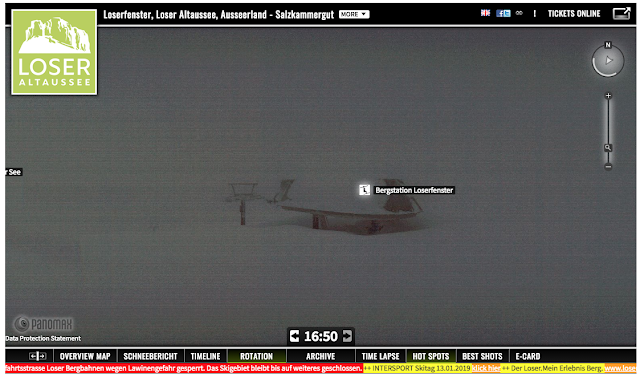 From a meteorological perspective, the driver of all this snow has been a persistent high amplitude flow pattern featuring ridging over the northeast Atlantic and troughing over eastern Europe.  This had led to the passage of troughs in northerly to northwesterly flow, with precipitation enhancement over the northern Alps.  Note that some of those troughs also produced heavy snowfall in southeastern Europe and central Italy, the latter due at least in part to sea effect generated over the Adriatic.

I don't know how good the Arpege new-snow depth totals are, but significant totals (> 50 cm/20 inches) are predicted from France to eastern Austria with a maximum (128 cm/50 inches) in the Arlberg region of Austria.

Equally remarkable to the snow totals in the northern Alps is how little snow there is in portions of the southern Alps, such as the Dolomites.  The image below was taken this afternoon above the Val di Fiemme southwest of Balzano, Italy.