Steenburgh winter, that magic period that begins when the Alta-Collins snow depth reaches 100 inches and ends on February 10 when the influence of the sun begins its seasonal "ramp up" in earnest on south aspects and eventually all aspects, began yesterday at 1 PM MST. 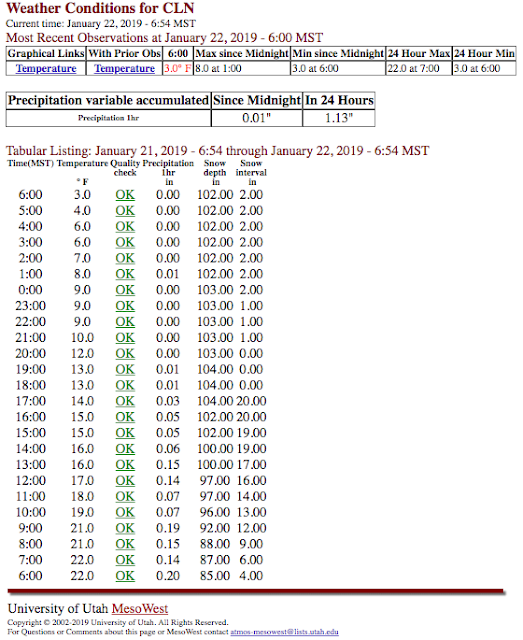 Steenburgh winters are the creme-de-la-creme of backcountry powder skiing.  They occur when there is a magic overlap between a deep snowpack and the low-angle sun.  There can be good skiing before and after Steenburgh winter, sometimes very good, but powder snobs know there's nothing like years when there is a deep snowpack and a low-angle sun to potentially enable aggressive lines to be skied as powder persists on all aspects when the avalanche hazard allows.

Steenburgh winters have been rare in recent years.  There was a brief appearance during the 2016/17 season, but I think the last extended Steenburgh winter was in 2010/11.  Looks like you will have nearly three weeks of it this year.

Enjoy, but please enjoy responsibly.  In recent years, a small, but growing number of people have been violating interlodge restrictions in Little Cottonwood Canyon. Alta central reports that they arrested nine individuals this week.


Interlodge violations carry a potential $1000 fine and jail time. We're serious about this folks. LIVES CAN BE LOST. We have arrested nine individuals this week including today.
— Alta Central (@AltaCentral) January 22, 2019

Interlodge is no joke.  It is serious business.  It exists for several reasons including (1) live artillery, including 105 mm armor penetrating or anti-infantry hells, is being shot across the highway, (2) large avalanches released by explosive work have and can hit the highway, parking lots, and structures, (3) buildings, especially fortified ones, are the safest place to be, and (4) public and snow safety professionals need to do their jobs.

Violating interlodge puts others in harms way and delays the opening of the resort, backcountry, and highway.  If the problem persists or worsens, we can all expect more draconian measures to be taken that will impact our recreational pursuits.  Let's keep it real.
By Jim S Posted at 1/22/2019 07:12:00 AM