Observations collected every minute from the William Browning Building (WBB) on the University of Utah campus show a wind shift from SW to WNW from 1153 to 1155 MDT.  Winds continue to turn through NW at 1200 MDT.  From 1153 to 1200 MDT, temperatures fell 10.3ºF.  Pre-frontal wind gusts reached as high as 42 mph a couple hours ahead of the front and peaked at 49 mph at 1209 MDT, just behind the front. 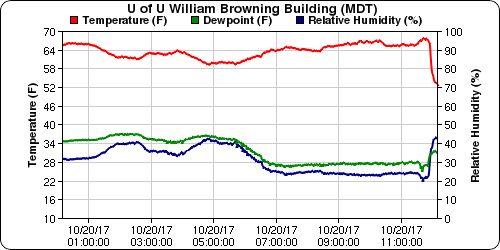 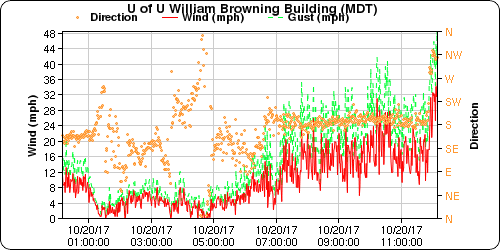 Adding to the story was the post-frontal blowing dust.  At Wendover in far western Utah, the post-frontal visibility dropped to as low as 4 miles, likely due to blowing dust.  However, at the Salt Lake City International Airport, minimum visibilities reached 1 mile, suggesting that dust emissions from the area surrounding the Great Salt Lake and the west desert contributed.

The dust made the cold front very apparent as it entered the Salt Lake Valley (h/t to @UteWeather for tweeting the image below, taken facing from the U toward downtown Salt Lake City).  One can see the classic frontal "nose" to the left of the photo, with friction resulting in a slight forward tilt of the front with height in the lowest one or two hundred meters, above which the front slopes back over the cold air. 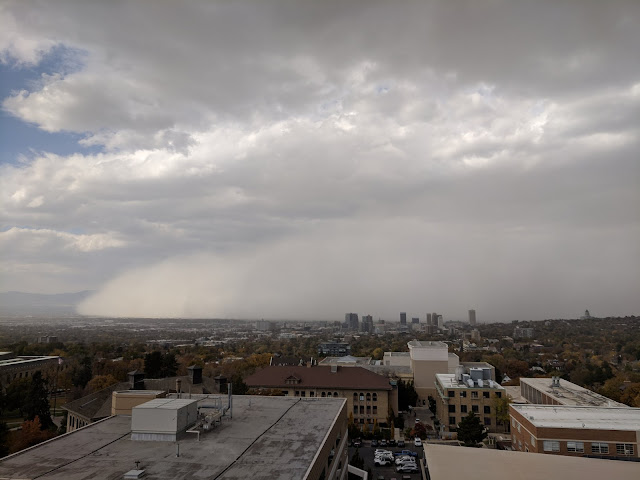 I guess if you're not going to have much snow, weather excitement like this is better than nothing.

Shortly after writing this post, the PM2.5 at our mountain met lab topped out over 200 ug/m3 (note scale change from graph above).

There's some uncertainty in these measurements, so perhaps we should be cautious about the absolute values.  That being said, the air was pretty nasty out there and remains so as I write this at 1235 MDT.
By Jim S Posted at 10/20/2017 12:25:00 PM