Hurricane Ophelia has had an unusual life cycle in the northeastern Atlantic Ocean and as of 11 AM AST this morning, was still a category 1 hurricane off the coast of Portugal.
Over the next 24 hours, Ophelia is expected to undergo what is known as extratropical transition, the transformation from a tropical cyclone into an extratropical cyclone.  It is expected to track northeastward and bring strong winds to Ireland and Scotland on Monday.

The GFS sea-level pressure and wind speed (meters per second) forecast from the GFS is below and it shows the storm strengthening and broadening just southeast of Ireland, before weakening just a bit prior to landfall.

Nevertheless, the system is quite strong at landfall.  The areas in yellow feature sustained winds of 28 m/s (56 knots) and orange around 35 m/s (70 knots), the latter are hurricane force.  These areas are found over water.  Winds are weaker over land, but still quite strong. 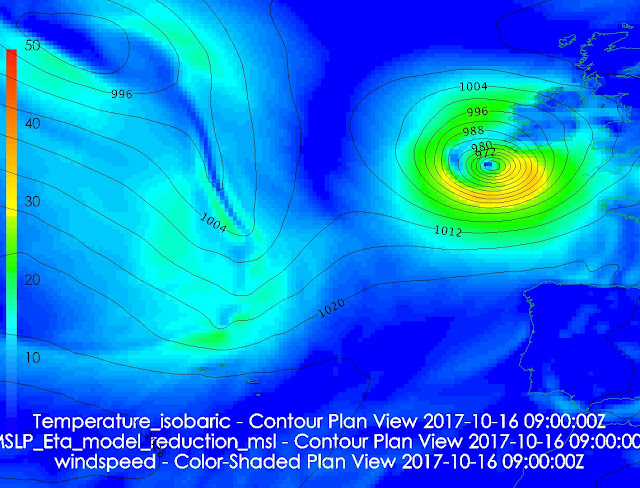 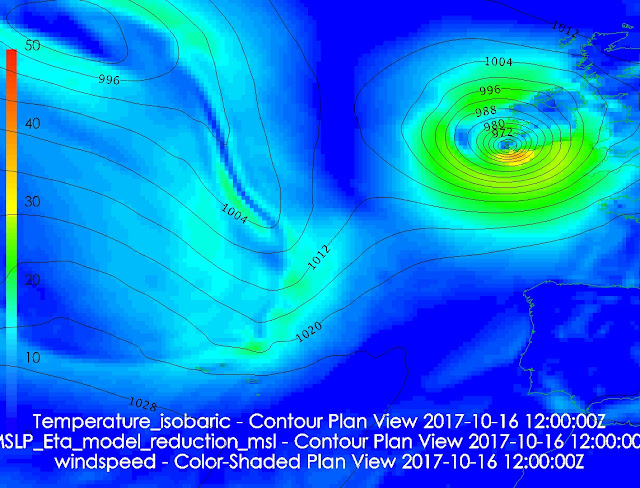 The Irish Meteorological Service, Met Éireann, has issued a National Weather Warning and is expecting sustained winds of 80 km/h (43 knots) and gusts in excess of 130 km/h (70 knots) in the southern half of the country.

Much will depend on the precise track of the storm, but it looks like this will be a strong windstorm for Ireland, and perhaps Scotland and other portions of the UK.
By Jim S Posted at 10/15/2017 09:43:00 AM