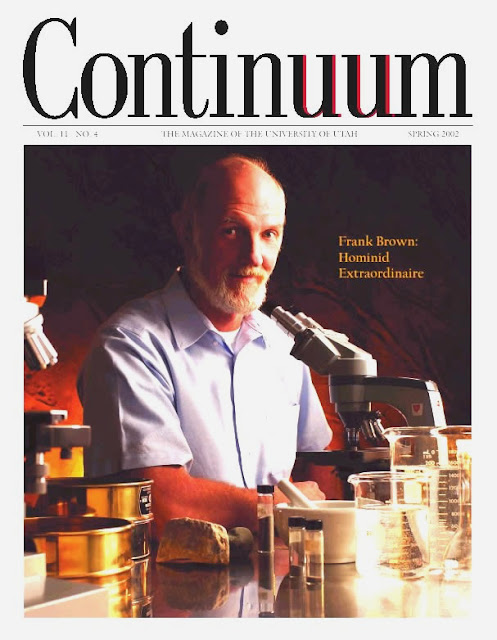 Frank Brown, professor of Geology and Geophysics and Dean Emeritus of the College of Mines and Earth Sciences at the University of Utah died suddenly of a heart attack on Saturday.  It is impossible to put into words the impact that he has had on my college, the University of Utah, and my career, but I'll make an effort here.

If you are or have been a student in the College of Mines and Earth Sciences, Frank fought tooth and nail to make your education as high quality and cost effective as possible.  I know this first hand because I was chair of the Department of Atmospheric Sciences for six years.  I watched Frank tirelessly fundraise for scholarships, attempt each year to find scholarship support for every student in the college with a GPA of 3.0 or higher (and bemoan the fact he couldn't provide more, as well as something for students below that bar), and question every aspect of my budget to ensure money was being spent effectively.

In 2001, Frank won the Rosenblatt Prize for Excellence, the highest award for faculty at the University of Utah.  It came with a check for $40,000.  He had every reason to keep that award.  He had worked tirelessly as a professor and dean.  He was probably the lowest paid dean on campus.  He drove a beat-up old pick up (to my knowledge he drove that truck until the day he died).  Instead, he donated every cent of it back to the University to help students.

When I arrived at the University of Utah, I was as green as grass, 28 years old, and commonly assumed to be the student representative at faculty committee meetings.  Frank provided unwavering support right from my arrival.  Perhaps he was more than glad to have a young faculty member deal with issues he'd rather avoid (computer support and management you know who you are), but it is now clear that he had an agenda.  I distinctly remember him telling me once, when I had only been at the U for a few years, that I would not only be a professor, but also a chair and a dean.  He was right on 2/3, at least so far.   His strategy was one of the self-fulfilling prophecy.  Tell good people very directly what they are capable of achieving and there's a pretty good chance it will happen.  He was also famous for confidence building quips like "you'll do fine" when people enter unknown and stressful circumstances.  It doesn't sound like much, but Frank had a way of saying it that inspired confidence.

The wonderful Continuum cover above calls Frank a "Hominid Extraordinaire."  The tendency when one sees a line like that is to think about professional achievement and in that regard, Frank was a Hominid Extraordinaire.  Indeed, Frank met that bar. How many Deans still taught a full teaching load every year?  Actually, I think he may have taught beyond that.  He was a world-class paleontologist.  He was a passionate and dedicated administrator.

But those aren't the reasons why Frank was a Hominid Extraordinaire.  The reasons are Frank's generosity and goodness.  He did much to help people who were sick and disadvantaged.  I don't know how he found the time.  I almost always found out about these efforts when we were working late or on a weekend and he'd mention that he has to go and lend someone a hand.  He traveled to Africa every summer for field work and, as discussed in the Continuum article, spoke several native languages.  Our meetings were frequently interrupted by a phone call from Africa.  Frank would pick up and cluck away in some impressive dialect.  When the call was done, he would proceed to tell me with great concern about the personal or regional challenges that the caller was facing.  I have no idea how he juggled so many balls.