Morning has broken and the GOES-16 visible imagery is simply beautiful and shows clearly the two frontal bands that will influence our weather today and tonight, the first over northern Utah and the Salt Lake Valley right now (as if you needed a weatherman to tell you that) and the second moving across northern Nevada.

Talk about well defined.  Really, you aren't going to see two more distinct frontal systems than that in the Intermountain West.

Radar imagery through 1406 UTC (0806 MDT) shows the frontal band progressing across northern Utah with a well defined back edge.  Perhaps I will be able to get in a bit of gardening today after all.

One thing that I noticed in the overnight model runs is how colossally bad the 0600 UTC 3-km NAM forecasts were for this morning.  The end of the loop above shows a very wide and broad frontal precipitation band over the Salt Lake Valley and surrounding area, but the 3-km NAM has nothing of the sort.

In fact, that forecast is so bad that I thought there might be an error in my retrieval and processing software.  Thus, I surfed around and found another site that serves up the 3-km NAM, Pivotal Weather.  They have 3-hour accumulated precipitation plots (above is 1-hour), but it's still enough to confirm a massive forecast bust. 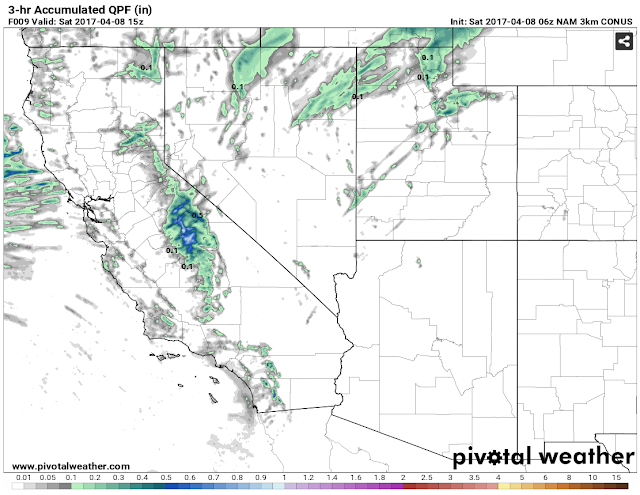 Basically, the 3-km NAM was completely clueless.  Resolution is worthless and even harmful if you can't get the basics of the large-scale flow, and it clearly didn't in this case.  The 12-km NAM wasn't much better.

Getting back to reality, the Alta-Collins site began to record precipitation at just before 6 AM and has observed 0.18" of water and an inch of west snow through 8 am.  It's a nice start, and they should see snow with the frontal band for the next 2-4 hours.  After that, how about scattered snowshowers and thunderstorms.  Yup, that nice clear gap this morning between the fronts could allow for good destabilization this afternoon and with strong flow and and approaching second front, we could see some stronger convection.  In fact, the Storm Prediction Center has us in a marginal risk category for severe thunderstorms. 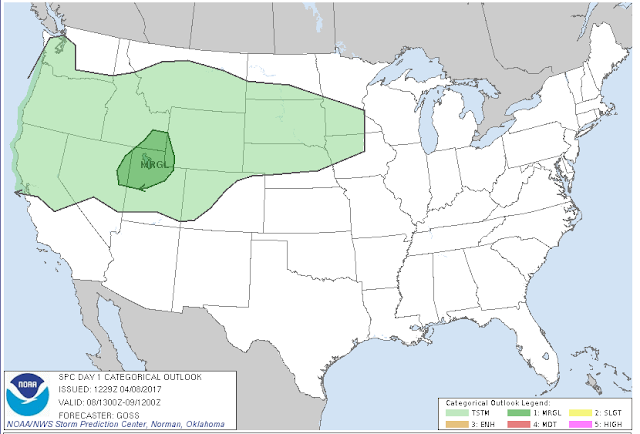 Then we have the front later today and tonight, and I'm hoping for a powder day tomorrow.  The NCAR ensemble is optimistic.  One member is a bit under an inch of total water, but most lie in the 1-2 inch range, which would probably be enough for decent turns in many areas, especially if we end up in the upper end of that range. 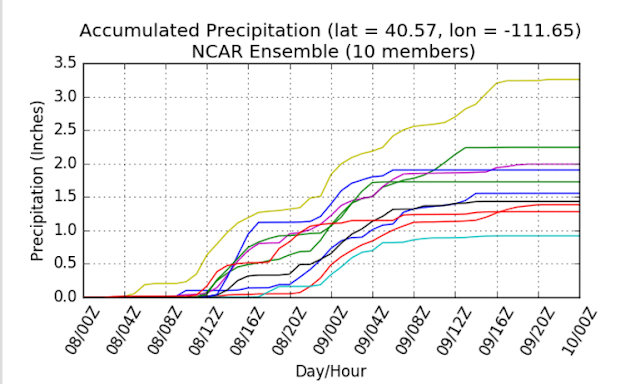 I'm now jazzed enough about the two fronts that I'll go for a total of 1–1.75" of water and 10–20" of snow for upper Little Cottonwood from 6 am this morning through tomorrow morning.  The NWS numbers are a bit higher than that.  I'm a little reluctant to go so high because the latest forecast flow directions never quite come around to the coveted northwest direction and I'm unsure about precipitation during the hit-and-miss convection between fronts.