Strong Fronts: Timing is Everything

Spring is the time of strong cold-frontal passages, as defined based on large, rapid temperature changes, especially in the Intermountain West.  This is quite clear if we look at the frequency of strong cold-frontal passages across the western United States by month, which shows a peak in the late spring (May).  There is a similar peak in the Intermountain West, but it is more pronounced and reaches a maximum in June.
There are two major reasons for the spring peak.  One is that it is still a synoptically active period, with frequent trough passages.  The second is that surface heating is also quite strong, which leads to daytime frontal intensification.  As a result, the frequency of strong frontal passages is highest in the late afternoon (~1800 local standard time) and shifts to later in the day as one moves from winter to summer.

An example of this daytime frontal sharpening is provided by forecasts of today's frontal passage.  The GFS 700-mb (10,000 ft) temperature forecast for 1200 UTC (0600 MDT) this morning shows a frontal zone over Nevada with temperatures on the warm edge of the frontal zone around 4ºC. 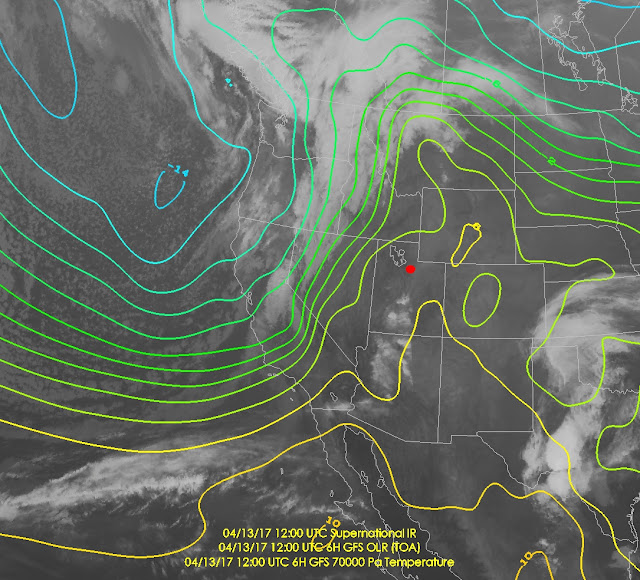 By this 0000 UTC (1800 MDT) this afternoon, however, prefrontal temperatures have warmed to 6ºC and the front entering northern Utah has sharpened significant, with the isotherms (lines of constant temperature) packed much closer together.  This is an example of the frontal sharpening process. 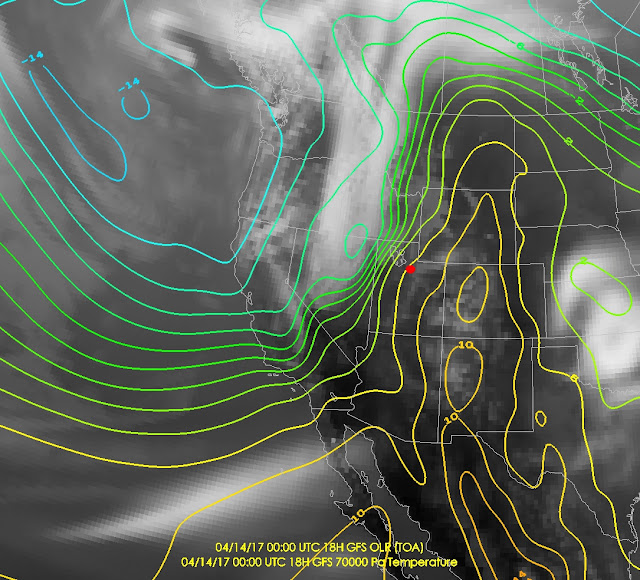 Precipitation behind the front will likely play an important role in the frontal sharpening of this event.  Shifting to the high-resolution rapid refresh (HRRR) forecast for 2100 UTC (1500 MDT) this afternoon shows the expected precip just behind the well-defined frontal shift that is entering northwest Utah at this time.  Lovers of wind and dust will be pleased to see strong southwesterly flow ahead of the front.  Yup, another dust layer is likely for the mountain snowpack.

The HRRR has the front entering the northern Salt Lake Valley at 0200 UTC (2000 MDT) this evening, perhaps a little late for a truly colossal temperature change, but it still should be a significant drop.  Note that the HRRR calls for the surface front to outrun the precipitation with time, something we often (but not always) see.  Those of you hoping for a dump like last weekend will be disappointed to know that the models pretty consistently weaken the post-frontal precipitation band as it moves into our area.  This time, Mother Nature says, NO SOUP FOR YOU!

Curiously, there are parts of the world where daytime surface heating can weaken cold fronts.  Portions of Australia, for example, observer stronger cold-frontal passages at night than during the day.  These are areas where the climate favors dry conditions both ahead and behind the front.  Because the post-frontal airmass is shallow, daytime heating is more confined vertically behind the front, leading to more rapid heating in the cold air than the warm and frontal weakening.
By Jim S Posted at 4/13/2017 08:47:00 AM