The latest model forecasts are advertising what I'll call a "cold front double whammy" for the weekend with two pronounced frontal passages. 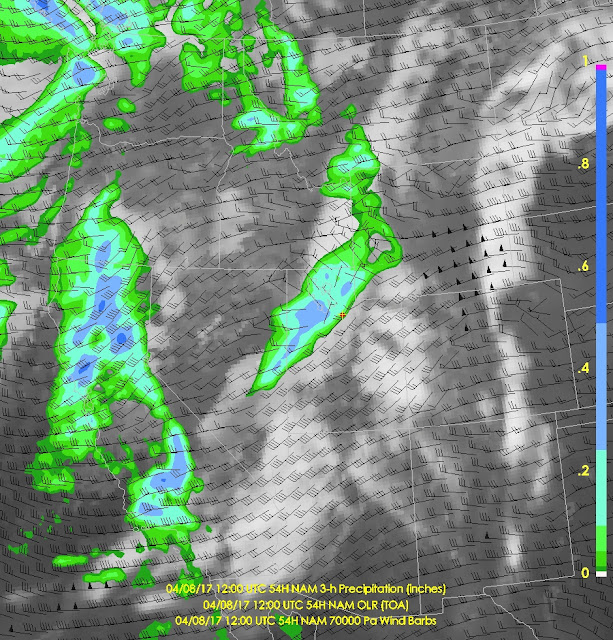 And then the precipitation associated with the second front over northern Utah merely 18 hours later at 0600 UTC (0000 MDT) Sunday. 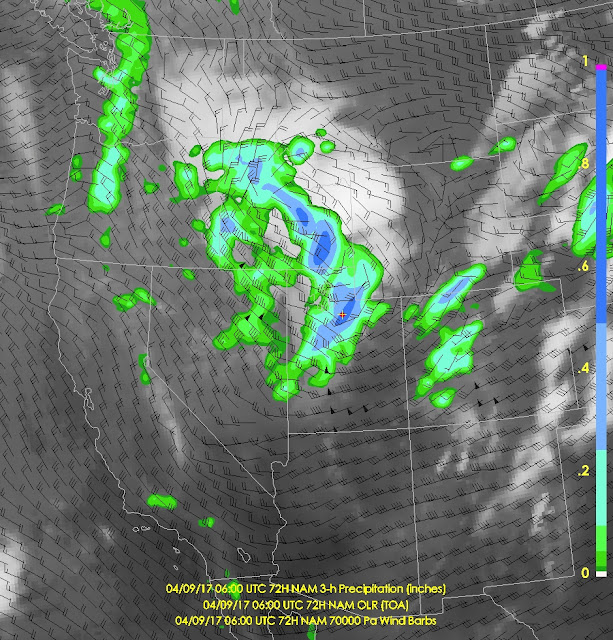 Time-height sections show each of these features quite well.  Keep in mind that by convention, time increases to the left in these time-height sections.  Thus, you can see the pre-frontal southerly flow and low-level dry air that will predominate through late tomorrow on the right side of the diagram.  Tomorrow could be quite windy with blowing dust and perhaps some elevated convection and a slight chance of a thunderstorm.  The bottom falls out with the frontal passage.  Note how the freezing level (blue line) drops, bottoming out at just about 850 mb (5300 ft) early Saturday morning, bringing prospects of snow down to bench level.

Then there is a rapid rebound in advance of the next front, with winds becoming southerly again and the freezing level rising.  Then, the second front ushers in even colder air Sunday night, with snow levels dropping to the valley floor.

We spoke a few days ago about the medium-range forecasts and the need to treat those with some caution.  We are close enough now that it looks like we will get some action this weekend, but far enough out that specifics regarding timing and accumulations are still hazy.  The first front comes in late enough that even if it drops a decent amount of water, it's probably going to create cream-on-crust conditions rather than true powder skiing.  The second system, assuming it comes in as advertised above, could yield some pretty good late-season skiing on Sunday, since right now it will be adding to Saturday's totals, may be a bigger storm, and will be right side up and colder.

Much depends on how much snow the two fronts put down.  I've largely given up on using the GFS, which has an overforecast problem and has produced about 2000 inches of snow this season at Alta.  If you want to have hopes consistently dashed, go with the GFS.  The 12-km NAM has generally been more reliable (although it was upgraded in March and we don't have a good sample on the new version yet) and generates 0.5" of water and about 5" of snow at Alta with the front on Saturday, and then goes crazy Saturday night and early Sunday, tacking on an additional 1.23" of water and 19" of snow by 9 AM Sunday.  What a treat that would be.

The downscaled SREF shows quite a bit of variation in both the timing of the front (earlier in the ARW members) and the amount of precipitation produced, especially by the first front (more in the ARW members).  Typically members based on the ARW dynamic core are wetter, and that's the case for the weekend.  The spread here does sober up my excitement as there are quite a few members producing less than an inch of water, which is probably the minimum required for decent powder skiing given the current spring snowpack. 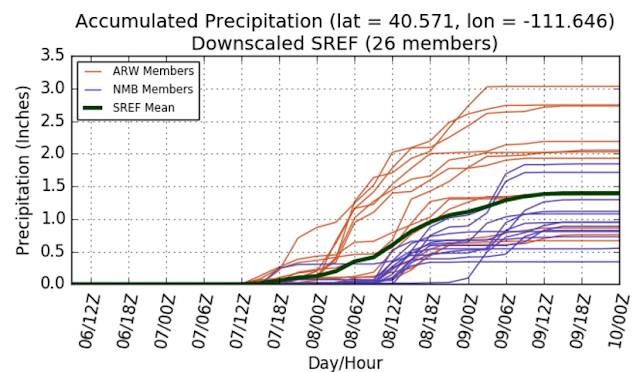 So, I'm guardedly optimistic for a good day on Sunday.  Saturday looks to be a day of transition, with good skiing more likely late than early and the need for the first front to come through big to get the spring snow buried.
By Jim S Posted at 4/06/2017 08:21:00 AM