Some Truth about Lake Effect

Another day, another front, another gasp of lake effect.  Radar imagery this morning shows some lake-effect precipitation over the Salt Lake Valley and the central Wasatch. 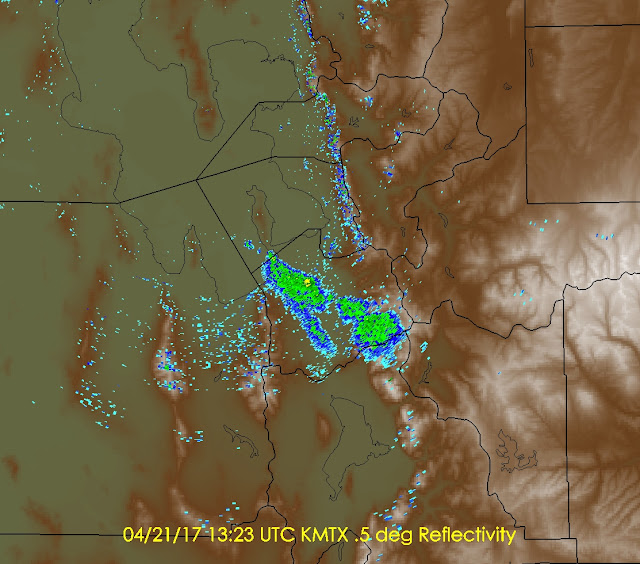 Alta-Collins is now up to a storm total of 8 inches.  Some of that is from yesterday's and yesterday evening's non-lake-effect convection, but some of it is lake effect.  Might be some decent spring skiing up there today.

The fact we've had a couple of brief lake-effect episodes this month shouldn't be a surprise.  We are in the heart of the spring lake-effect season.  A curious aspect of lake effect produced by the Great Salt Lake is that it's not most common during the heart of the ski season, but instead during the shoulder seasons.  The primary peak in lake-effect frequency (and amount) is in November, and the secondary peak is in March and April (depending on if you are looking at amount or frequency).

Fall events tend to last longer and produce more precipitation in November than March and April.  One reason for this is that the sun is much lower and the days shorter in November, which allows for stronger, more persistent land-breeze circulations at night and into the morning.  Such circulations play an important role in lake-effect initiation and maintenance during many events.

The two seasons of lake effect produced by the Great Salt Lake is unusual compared to larger bodies of water.  For example, downstream of Lake Ontario, there is a single peak in December and January (note change in x-axis from above).

This difference is closely related to lake depth.  The Great Salt Lake is a very shallow lake and warms rapidly in the spring, enabling a 2nd peak of lake effect.  In contrast, Lake Ontario is a deeper lake and exhibits a strong lag in lake temperature relative to the seasons.  As a result, lake-effect peters out as one gets into the late winter and spring.

The importance of lake-effect for skiing in Utah is massively overstated by many ski writers.  It represents only about 5% of the cool-season precipitation (on average) in the Cottonwoods.  It can, however, occasionally provide enough at the end of a storm to vastly improve the skiing.  I suspect that might be the case today.  Without the lake effect, we were clearly looking at a dust-on-crust event this morning with perhaps 4-6".  Putting 2-4" more on top of that surely will help the skiing a bit.
By Jim S Posted at 4/21/2017 07:59:00 AM