A Look Back at April and March

If the snowfall history page on Alta's web site is correct, they've had 102" of snow this April.  During this past week, the Alta-Collins peaked at 161", which I suspect is the highest since the epic 2010/11 season.

The SNOTEL data from Snowbird shows a roughly 8 inch increase in water equivalent for the month.  We now sit just below 60 inches of snow water equivalent, about 15 inches above average.

Having missed the entirety of our most recent storm cycle, I'm forced to reminisce about 2010/11, which still reins supreme, with a larger increase in snow water equivalent for the month and a snow water equivalent of almost 75 (see cyan line above).   I got a reminder from Facebook this morning of just how great that season and April was. 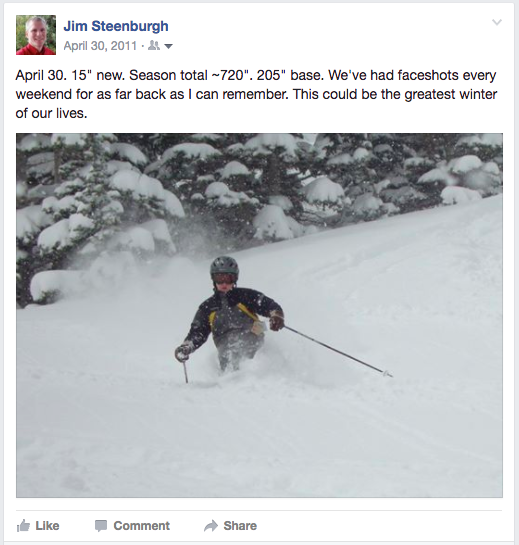 Meanwhile, in the valley, the Salt Lake City International Airport is now up to 6.73" of precipitation since March 1st.  That rates as the 5th wettest March–April period on record.

For those of you who were able to enjoy the skiing this past week, you can thank the Steenburgh effect.  You will, however, be disappointed to learn that I'm back in town next week.  Not surprisingly, the computer models call for a high-amplitude ridge to develop over our area by mid week.