It's Not Over Until It's Over

This weekend's storm provided a wonderful exclamation point for the ski season.  Really, I was feeling depressed about how the season was going out with a whimper rather than a bang.  From March 5th to April 8th, there was only one day during which Alta recorded 10 inches of snow (March 27th) and we suffered through the hottest March on record.  Corn is fine, but I'd rather be skiing powder.  For April, Sunday was as good as it gets, and I liked it so much that I did a dawn patrol yesterday morning to get in some more turns before class.

My season now feels complete, although it's never over until it's over.  I've skied good (not great) powder on Memorial Day weekend in the Wasatch.  It happens.

And, while we're talking about it not being over until it's over, we turn our attention to California.  The models continue to show this prolonged period of southwesterly large-scale flow over the eastern Pacific and western US in which California continues to see storm after storm.  For the next seven days, our downscaled NAEFS ensemble product is producing mean water equivalents reaching over 3 inches. 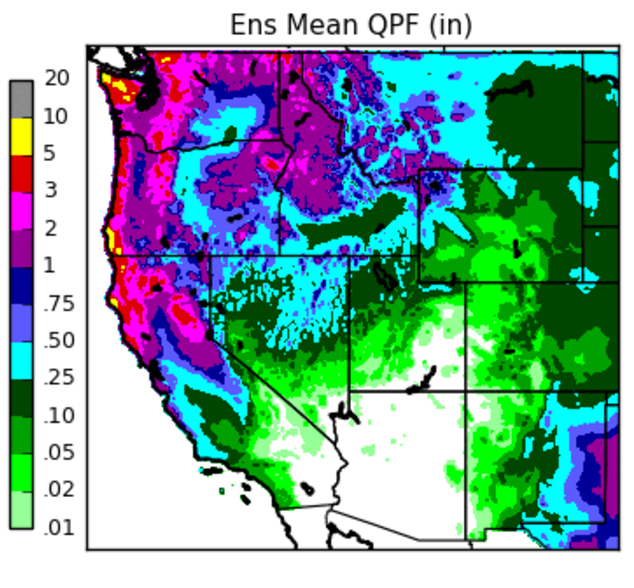 Such numbers are not remarkable compared to wet periods this past winter, but they show winter hasn't yet quit in the Sierras.  In addition, it will likely do the job for breaking the wettest water year on record in that region.

I really need to take a trip over there to check out the snowpack.