Greenhousing is a commonly used word in the snow and avalanche business.  It may be 12 letters long, but for powder skiers, it is essentially a four-letter word because it leads to snowmelt and melt-freeze crusts.

Although I didn't do an exhaustive search, it's actually quite difficult to find a good definition or explanation of greenhousing.  It is not defined, for example, in the National Avalanche Center Encyclopedia, and isn't in the indexes of the avalanche books that I have on my shelf.  One can, however, find discussions of the importance of the greenhouse effect, such as this passage from The Avalanche Handbook by David McClung and Peter Schaerer:


"Conditions leading to the formation of wet-snow avalanches by radiation in the spring are governed by the net radiation balance of the snow surface. The net balance includes both long-wave (terrestrial) and short-wave components (sunlight). Direct sunlight warms the snow cover, making wet-snow avalanches possible, but thin cloud cover may provide a greenhouse effect to prevent long-wave cooling" (my underline).

Let's take a look at what McClung and Schaerer are talking about.  The net radiation balance of the snow surface involves both shortwave and longwave radiation.  As illustrated below, the sun provides shortwave radiation during the day, some of which is reflected back to the sky.  The remainder is absorbed by the snow and serves as an energy input.  Atmospheric gases (especially water vapor) and clouds provide long-wave radiation, while the snowpack emits long-wave radiation.  The former is an energy input, the latter an energy output.  The net radiation balance is sum of the absorbed solar radiation, plus the longwave in, minus the longwave out. 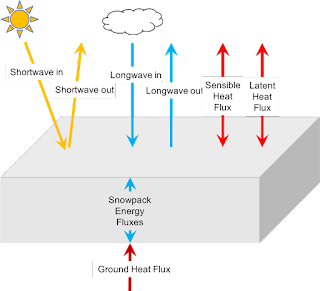 There are other processes that affect energy flows to and from the snowpack.  For example, if the temperature of the snow surface and the air are different, there is an exchange of heat known as sensible heat flux.  Latent heat fluxes involve snowpack sublimation (energy lost by the snowpack) or vapor condensation onto the snow (energy gained by the snowpack).  There can also be exchanges of energy within the snowpack and ultimately with the ground.  These can be important, but for the purposes of this discussion, let's focus on radiation.

The so-called greenhouse effect noted by McClung and Schaerer involves the longwave in part of the net radiation balance.  Under clear skies and relatively dry conditions (low atmospheric water vapor), the incoming longwave radiation is small.  It increases, however, if clouds are present and, since the amount of longwave radiation emitted by clouds is dependent strongly on temperature, is greater for warm clouds than cold clouds.  Low clouds are typically warmer than high clouds and usually result in a larger input of longwave radiation to the snowpack.

Which brings us back to greenhousing.  The greenhouse effect is always present on this planet.  Always.  24/7.  There is always some longwave radiation input to the snowpack from the atmosphere and, if present, clouds.  In this sense, greenhousing is always occuring.  Greenhousing, as used colloquially however, typically describes situations in which the longwave input to the snowpack is larger than than observed under clear skies, contributes to a positive net radiation balance, and leads to or enhances warming or melting of the snow surface.

Here's an example.  Imagine a nighttime situation where skies are initially clear and the snow surface is well below 0ºC.  However, low clouds spread over the area.  In this instance, even in the absence of sun, the snow will warm due to the increase in longwave radiation input to the snowpack.  This happens frequently in the arctic and even on nights where cloud cover increases in Utah.

Now lets try another extreme.  A warm, juicy airmass with temperatures above 0ºC moves in overnight.  Fog forms, then the sun rises.  The fog, however, is relatively thin, enabling most of the solar radiation to reach the snow.  In this case, you have considerable net solar radiation, but also a great deal of longwave radiation input into the snow.  The net radiation balance is strongly positive and contributes to snowmelt (as do sensible and latent heat fluxes, the latter from condensation).

One "aspect" we haven't talked about is aspect.  The net solar radiation is strongly dependent on aspect, time of year, and time of day.  However, there are many situations in which clouds are present over all aspects.  In such a situation, the greenhouse effect is an equal opportunity offender, affecting all aspects.  On aspects that don't receive a lot of solar radiation, the presence of clouds can tilt the net radiation into positive territory and contribute to warming and melting of the snowpack.
By Jim S Posted at 4/14/2017 09:59:00 AM