Smoggy air is worsening as inversion conditions have developed over the Salt Lake Valley and Wasatch Front.

Soundings collected Monday, Tuesday, and this (Wednesday) morning show the development of the inversion quite nicely.  Note in particular how temperatures have warmed aloft, especially in the layer from 800-600 mb (about 6500 to 13000 feet).

This is fairly typical for the development of an inversion in the Salt Lake Valley during winter as temperatures warm dramatically aloft, but remain relatively steady or cool just slightly near the surface.

Note, however, the wind directions in the soundings above.  Above the surface, they are predominantly from the NW, N, or NE.  Where is all this warm air coming from if the flow is from the northern part of the compass?

Well, the assumption that flow from those directions is transporting colder air from the north is often a poor one when a ridge is located upstream of Utah for two reasons.  First, when a ridge is upstream, such a flow often transports warmer air to Utah.  For example, the 700-mb (~10,000 ft) analysis for 0000 UTC 26 Jan (5 PM Tuesday) shows northwesterly flow over northern Utah and Idaho, but also warmer air upstream over the Pacific Northwest.  As a result, the northwesterly flow was transporting warmer air into Utah at upper levels. 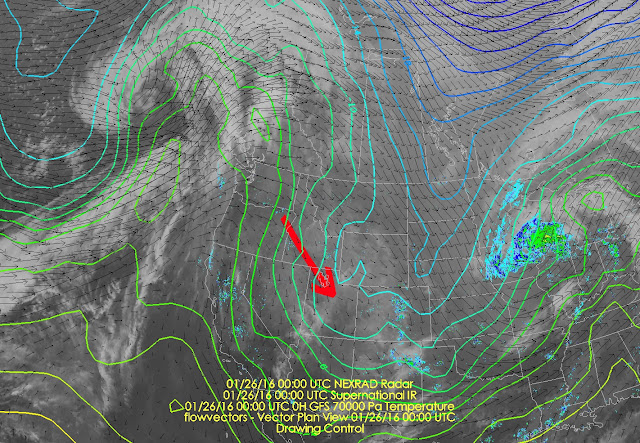 Second, the area downstream of a ridge is typically sinking.  This is one of the reasons why ridges are commonly (but not always) associated with drier weather.  As air sinks, it experiences compressional warming as it moves to higher pressure.  Such sinking is usually a major contributor to the increase in temperatures aloft during the development of our wintertime inversions.

During the development of an inversion, PM2.5 concentrations typically increase by about 10 ug/m3 per day.  That's tracking fairly well in this event as we were near zero on Monday morning (01-25) and are now in the 15-20 ug/m3 range.
We see similar concentrations at our sensor at the Neil Armstrong Academy in West Valley City, although the spikiness is a bit larger since we take 5-min readings rather than hourly averages.

By tomorrow, we'll probably be flirting with 30.  The good news is that an approaching weather system on Friday, which would otherwise be day 4 of the inversion event, should stir things up before it gets really bad.  A stirring every 4 days is the key to avoiding major air quality episodes in the Salt Lake Valley.
By Jim S Posted at 1/27/2016 08:13:00 AM