I often tell people that total snowfall or peak snowpack observations don't always tell the whole story about how the quality of the skiing in a given season.  Seasons with near average snowfall (and peak snowpack) may have been good or bad ski seasons depending on when and how the snow fell and other factors such as temperature.

Let' me show you some interesting numbers to illustrate this.  First, is it your impression that this year is a better ski season than last?  Most people I spoke with this weekend said yes and for my interests as a backcountry skier, this year seems to be much better than last.

However, if we look at the snowpack in the central Wasatch, it's not much different than last year.  At Snowbird, the snowpack water equivalent is actually a bit behind last year.

Any individual SNOTEL station can sometimes be a bit unrepresentative, but if we look at others in the central Wasatch, we see a similar result. For example, at the Mill-D SNOTEL in Big Cottonwood, we're sitting almost dead even with last year.

Well, for one the low elevation snowpack this year is substantially better than last year.  The SNOTEL sites in the central Wasatch are at relatively high elevation, but if we look at a low-elevation SNOTEL station like Ben Lomond Trail (5829 ft) we find we are running well ahead of last year. 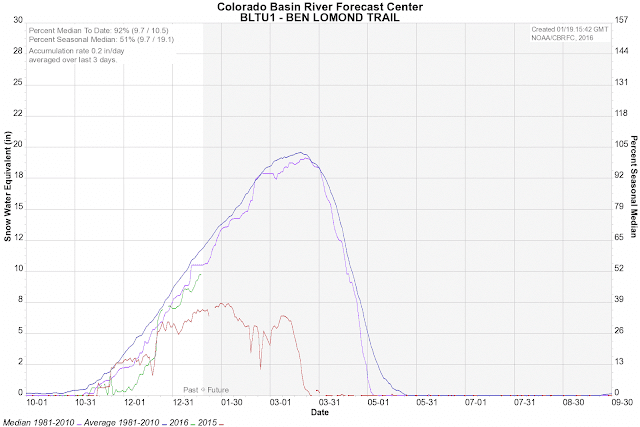 For backcountry skiing access and for skiing at resorts with lower elevation terrain, that makes a big difference.

Another possible factor is that the storms last December and early January tended to be large and  separated by many days.  This may have resulted in a bit more loss to sun-driven snowmelt on south-facing aspects than we've seen this year, although I'm not sure if that really kicked in until about this time (perhaps your recollection is better than mine).

Finally, when we think back to last year, we might be strongly influenced by the trajectory for the latter half of the ski season, which was terrible.  Note how the red lines above climb up very slowly compared to the average or the median.  Last year was a really terrible season from mid January on, and that had a dramatic impact on our perception of the season.