The western U.S. has been in the grips of pronounced split flow for some time now, but the past few days northern Utah has really lucked out.

The analysis below is for 0000 UTC 4 January (5 PM Sunday Jan 3 MST) and I picked it because the split flow was especially pronounced at this time.  Note the strong Pacific jet over the western and central Pacific and its extension across Mexico and the southwest U.S., with the northern branch of the split extending poleward over the northwest Pacific and ultimately eastward across Alaska and northwest Canada.

However, over the past 3 days enough "stuff" has pushed through the split or glanced us sufficiently to give us some periods of mountain snow that have added up to about 18" near Sundance and a foot in the upper Cottonwoods.  Pollution levels have also moderated.  Note, for example, how PM2.5 concentrations have lowered since January 5th at the Neil Armstrong Academy in the West Valley.

For portions of the Salt Lake Valley, including the Neil Armstrong Academy site above, this wasn't a case of an abrupt mixout.  There were two brief periods of very clean air on the 5th and 6th when clean southerly flow beat back the colder, denser air that was especially stingy over and near the relatively cold Great Salt Lake, but in both cases, some of the crap in that airmass returned.  However, slowly but surely PM2.5 levels have dropped.  In addition, despite yesterday's fog, by afternoon, there was no inversion evident in the afternoon sounding from the Salt Lake City airport. 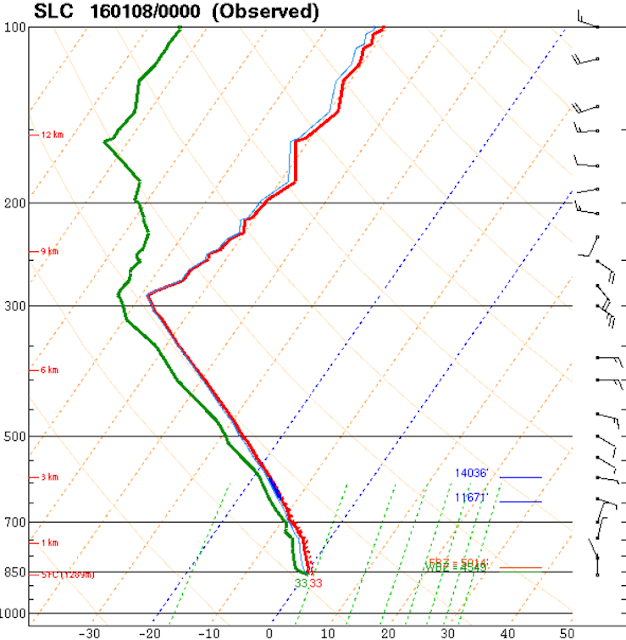 There might still be a thin layer of stingy cold air and pollution over the Great Salt Lake, but by and large, we've been fortunate the past 3 days to get some mountain snow and lower the pollution levels.

The big split will dominate the large scale flow over the next few days, with mountain snowfall liekly limited.  We may see a few mountain snow showers here and there but the NAEFS downscaled forecast for Alta-Collins shows little through Wednesday (0000 UTC 14 Jan) after the snow showers last night. A few members slip something through the net after that, but others are less optimistic.

The pattern we are currently in is fairly typical for strong El Nino years.  I don't like to call this an El Nino pattern or the storms in the southwest El Nino storms, but I suspect we're going to see a lot of this in the coming weeks.  Snowfall in northern Utah's mountains could be poor, average, or good, however, depending on the gory details, including the position of the southern branch of the jet, the strength of storms that slip through the net, and how well we do during periods the split breaks down.
By Jim S Posted at 1/08/2016 09:02:00 AM