Perspectives on Our Next Storm Cycle

After 7-10 days of active weather, the Wasatch are enjoying a brief lull this week with high pressure in control through Thursday.

Looking further out, however, it appears we will have a return to stormy weather possibly as early as Friday and likely by Friday night or early Saturday.

The origins of the storm can be traced to the western Pacific.  While you were skiing deep powder last weekend, a developing cyclone was extracting a slug of high precipitable water (and hence water vapor content) air from the tropical western Pacific.  Subsequently, a potent atmospheric river formed and has been maintained along the trailing cold front accompanying the cyclone and is expected to reach the west coast of the U.S. later this week.

Note how the southern High Sierra serves as an apparent barrier to the inland penetration of the atmospheric river in the analyses above.  This is a common occurrence due to heavy orographic precipitation and associated water vapor rainout (or snow out).  Utah would be far snowier if the Sierra weren't so damn big!

OK, now that I have your attention, let me just say that everything after the inland penetration fo the atmospheric river gets pretty damn complicated and is far enough out that I don't want to spend a lot of time talking about gory details.  The NAEFS ensemble plume for Alta-Collins illustrates that this is a situation where a significant accumulations are possible, but also that there is a wide range of solutions with water equivalents ranging from 1 to almost 6 inches for the period. 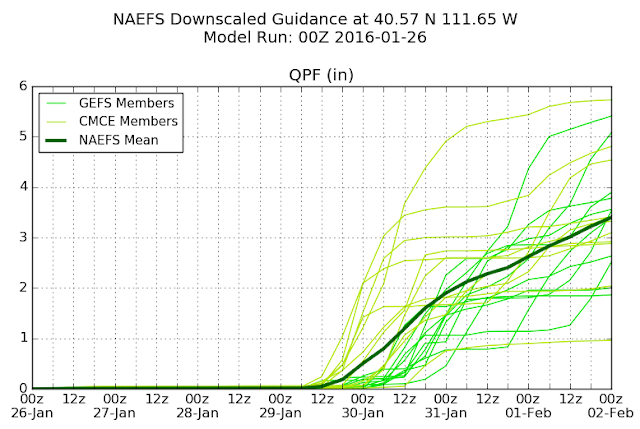