We could talk about the inversion and air pollution that are currently blocking our views and clogging our lungs over the Salt Lake Valley, but it's more fun to think about the storms and snow that are coming our way Friday and Saturday. 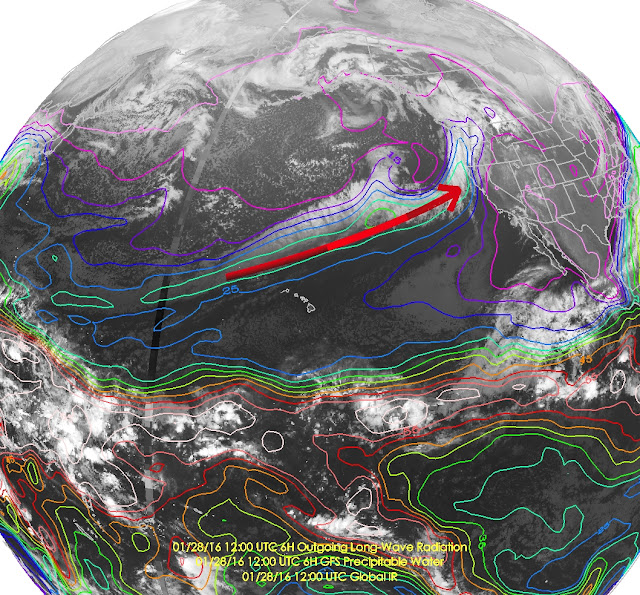 The second major player is the cold front associated with a surface cyclone making landfall onto the British Columbia Coast tomorrow afternoon.  The AR is located in the strong flow just ahead of this cold front, resulting in the double whammy of high water vapor concentrations and strong flow.


The product of wind speed and water vapor concentration, when integrated through depth, is known as integrated water vapor flux, and exceptionally high values are expected ahead of the cold front over northern Nevada and Utah on Friday Night.  In fact, for the 3-week period covering late January and early February, the values being forecast for tomorrow night lie outside climatological analyses going back to about 1979. 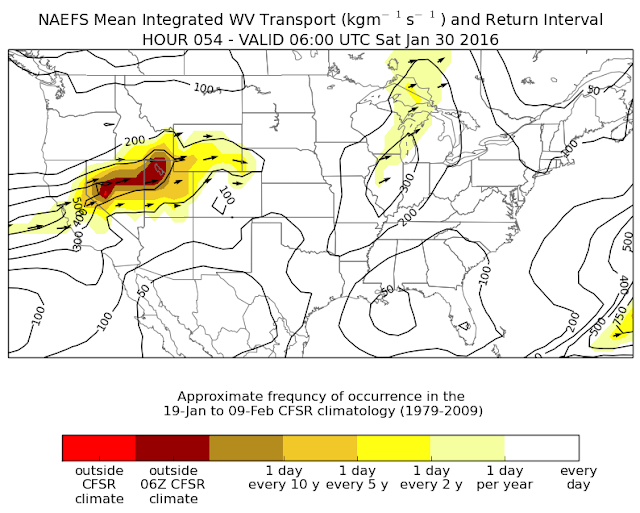 So we're looking at some big changes over the next 2 days.  Yes, it's clear today, meaning beautiful in the mountains and polluted in the valley, but tomorrow we'll see some mountain snow showers (valley clouds and maybe a rain shower or two) at times as the moisture scraps and a weak warm front ahead of the atmospheric river move through.  Late tomorrow, the core of the atmospheric river moves in and will give us a mountain snow and valley rain tomorrow night.  Snow levels will be rising, perhaps to 7500 ft around midnight, before falling again.  The cold front then moves in during the day on Saturday, with snow levels falling further.

As things stand now, this is looking like a major event in the mountains.  The 12Z NAM is putting out 2.28" of water for Alta-Collins, most of which falls from 5 PM Friday to 5 PM Saturday.  That is a significant amount of water falling in 24 hours, and NAM precipitation rates reach more than .3" an hour per 3 hours.   Events that produce 2" of water in 24 hours at Alta-Collins happen about 3 1.5 times per season if you add up the bars below.  More than about 2.5" in 24 hours is a once in every two seasons in a season event.

My usual approach when forecasting is to use the NAM precip as a lower bound for water totals at Alta, but flow directions during the event are such that Alta might get shadowed a bit by the Oquirrhs at times.  In addition, the models sometimes overdo the early stages of these moist, warm events.  Nevertheless, I'm concerned this will be a big event and at this stage I'd probably lean toward a total of 1.25 to 2.5" at Alta-Collins by 5 PM Saturday.  The northern Wasatch should get a pounding as well and I'd expect to see some big numbers from places like Ben Lomond Peak.

Note I used the word "concerned" as this is going to be a messy storm for avalanches with mid-to-low elevation rain and large accumulations and wind at high elevations.  Be careful out there.