We'll start with the most "benign" —thermally forced cumulus clouds that formed on the mountains immediately north of Little Cottonwood Canyon yesterday morning.  These are a common site in Little Cottonwood and are the result of upslope flows that form over the canyon sidewalls.  It is likely that such flows form earliest in the morning on the south facing sidewall this time of year. 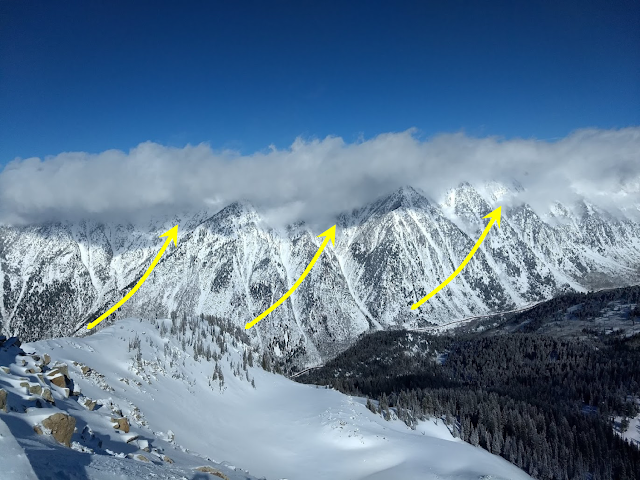 In contrast, nocturnal downslope flows can linger later in the morning on the north facing sidewall.  The upslope flow helps to form cumulus clouds when the temperature and moisture profile is right.

I also noticed some evidence of vertical wind shear and associated turbulence in the clouds near the Pfeifferhorn that morning, but nothing as dramatic or beautiful as what Luke Stone saw over Mount Timpanogos.

As he notes, such clouds provide an example of Kelvin-Helmholtz waves, which occur where strong wind shear overwhelms the atmospheric stability, leading to overturning of the atmosphere.  If a cloud is present, the resulting pattern can look like water waves breaking near the beach.

Unfortunately, upper-air soundings are not collected mid-day, but if we look at the evening (5 PM) sounding from the Salt Lake City airport, we see that there was a layer (horizontal green line) at about 630 mb that is near saturation and in which the winds are increasing with height.  Mt. Timponogos is just a bit lower than this at about 660 mb.

Alternatively, the clouds could have been produced by shear right at the base of the inversion that was near crest level at about 690 mb.  Given the difference in time and distance, either of these are plausible.

Finally, Allan Gardner posted the video below on Twitter.  This is an example of a hydraulic jump in which flow is moving rapidly downslope, becomes "supercritical", and then rises rapidly in the hydraulic jump.

One of those happy accidents yesterday. We opted to hike on Antelope Island to get out of the inversion and snow and enjoyed a mesmerizing hour of Mother Nature playing with fog and clouds. pic.twitter.com/jmsZAL7E8Q
— Alan Gardner (@alangardner) January 26, 2020

The process is very similar to what can happen during flow over a rock in a stream.

As one might gather from the photo and video above, the region near and downstream of the jump can be quite turbulent.

It's great when clouds provide guidance about the flow in the atmosphere, but Kelvin-Helmholtz instabilities and turbulence associated with downslope flows and hydraulic jumps can occur in the clear air.  They represent important hazards for aviation or recreationists such as parasailers.  In particular, both hazards and produce severe turbulence, often in areas that are otherwise free of clouds.  Just one of the reasons why I always wear my seatbelt on an airplane.
By Jim S Posted at 1/26/2020 12:19:00 PM

Email ThisBlogThis!Share to TwitterShare to FacebookShare to Pinterest
Labels: Clouds