The snow continues to pile up and the automated snow depth sensor at Alta Collins reached 96 inches at 6 AM this morning. 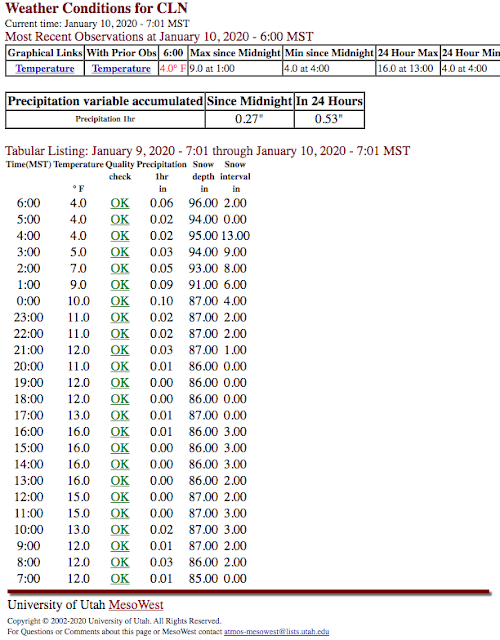 This puts us on the cusp of Steenburgh winter, my vain name for the crème de la crème of backcountry ski conditions when the snowpack is deep and the sun angle low.  Officially, Steenburgh winter extends from the day when the Alta-Collins snow depth reaches 100 inches to February 10 when the sun begins to have an increasingly caustic influence on the snow as spring approaches.

It could get close, but I don't think we will reach the start of Steenburgh winter today.  We need another four inches and things seem to be winding down as I write this.  Our next storm, which looks to be a good one, develops tomorrow.   It's possible that Saturday will be the first day of Steenburgh winter.  If not, it will come no later than early next week.

One thing is for sure, the forecast through next Wednesday looks like a powderhound's dream with cold storms coming in one after the other.   This is probably the result of the similarly vainly named Steenburgh effect as I will be leaving town tomorrow for the annual meeting of the American Meteorological Society in Boston.   Enjoy, but be safe out there.
By Jim S Posted at 1/10/2020 07:18:00 AM